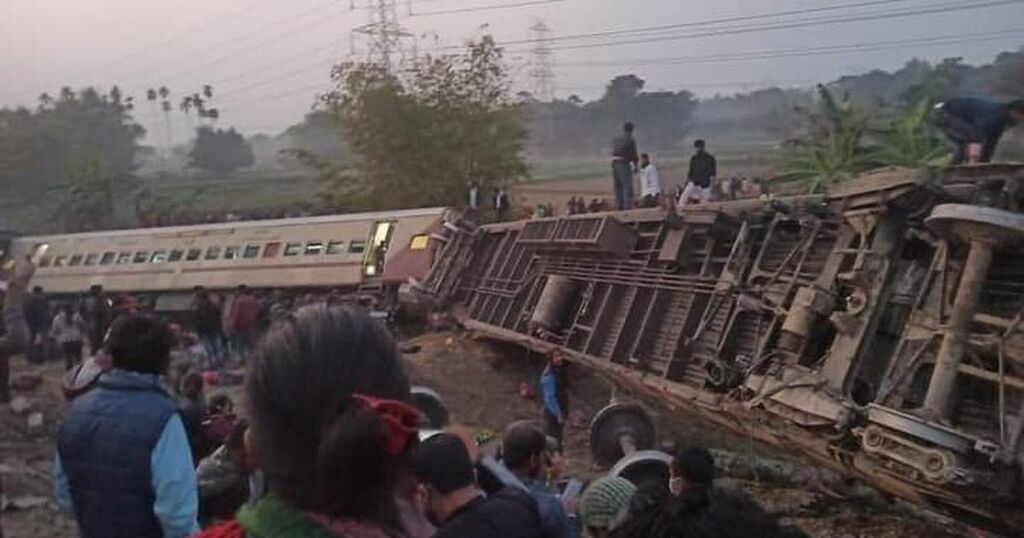 At least six people have been killed and more than 30 have been injured when a train derailed in West Bengal state, in India, officials said.

Images show rescuers trying to pull people to safety after 12 of the train's coaches left the track and five of them are reported to have turned upside down.

The train was en route from Bikaner, in Rajasthan state, to Gauhati, when the accident took place in Jalpaiguri district.

Northeast Frontier Railway tweeted: "With extreme grief, we are providing the information that now there are six casualties and 31 injured in this unfortunate incident. The details will be shared shortly after the identification is completed."

It is reported locally that the crash may have been caused by a crack on the track.

Railway official Guneet Kaur said the cause of the accident was being investigated and financial compensation would be given to families of the dead and the injured.

North Bengal BSF (Border Security Force) tweeted pics of soldiers helping at the scene of the tragedy after they were brought in to help with the rescue.

It said: "Quick Response Team of #BSF troopers including medical specialists from #BSF SHQ Jalpaiguri. @BSFNBFTR is making all possible efforts in the rescue ops & are evacuating the injured from derailed coaches which met a tragic accident near Mainaguri (WB) on 13 Jan ’22."

India's president Ram Nath Kovind and other politicians expressed their sorrow over what happened.

The president stated: "The derailment of coaches of the Bikaner-Guhawati Express near New Maynaguri, West Bengal is distressing. My thoughts and prayers are with the affected passengers and their families. I wish speedy recovery to the injured."

Government minister Amit Shah tweeted: "Anguished to learn about the loss of lives due to a tragic rail accident in West Bengal. My deepest condolences with the bereaved families. Praying for the speedy recovery of those injured."

Accidents happen on a regular basis in India due to an ageing network that has not been well maintained. Safety standards have been criticised on the state run system which carries an estimated 23 million people a day.