At Least 1 Dead, 10 Missing in Landslide Near Mexico City 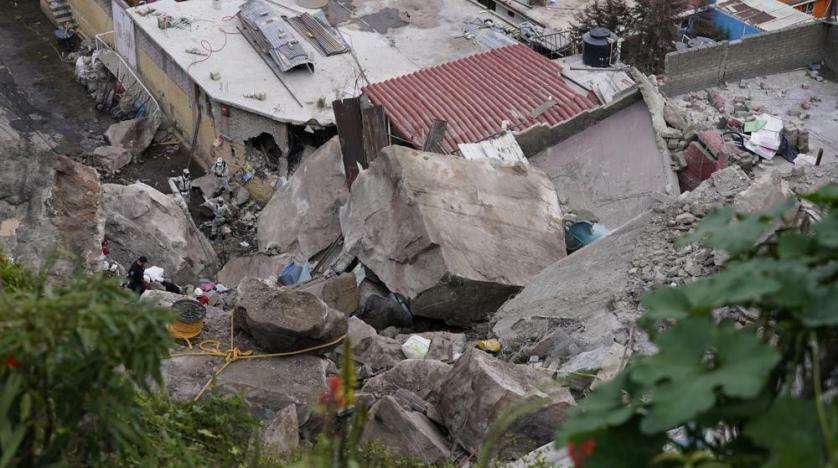 A section of mountain on the outskirts of Mexico City gave way Friday, plunging rocks the size of small homes onto a densely populated neighborhood and leaving at least one person dead and 10 others missing.

Firefighters scaled a three-story pile of rocks that appeared to be resting on houses in Tlalnepantla, which is part of Mexico state. The state surrounds the capital on three sides.

As rescuers climbed the immense pile of debris, they occasionally raised their fists in the air, the familiar signal for silence to listen for people trapped below. Firefighters and volunteers formed bucket brigades to pass 5-gallon containers of smaller debris away as they excavated.

“In this moment our priority is focused on rescuing the people who unfortunately were surprised at the site of the incident,” said Tlalnepantla Mayor Raciel Pérez Cruz in a video message. Authorities had evacuated surrounding homes and asked people to avoid the area so rescuers could work.

Rescuers carried a body on a stretcher covered with a sheet past AP journalists. The Mexico state Civil Defense agency said in a statement that at least 10 people were reported missing.

Among the volunteers were 30-year-old construction worker Martin Carmona, 30, and his 14-year-old son. “They organized us in a chain to take out buckets of sand, stone and rubble,” Carmona said. “A co-worker lives there. He has a wife and two young children under the debris.”

Carmona and his son arrived to the pile before government rescuers and his friend was already there digging for his wife and kids.

Neighbors began to complain that they need more help and organization.

Carmona said rescuers heard children, but after two hours of removing debris, authorities told volunteers to leave the area. Only relatives stayed to help the rescuers.

Ana Luisa Borges, 39, said she lives just three houses down from those hit by the landslide.

“It thundered horribly,” she said of the sound of the slide. “I grabbed my youngest son and ran out (of the house). Then came a very big cloud of dust.” Fortunately, her other four children were in school.

“There are a number of houses there,” she said of the slide area. “There was a building, but they tell us there are people there and children. I saw one person come out with head injury.”

Borges said they have been warned that another rock could come down and that she didn’t know where they were going to sleep tonight.

“They’ve only told us that we have to leave (our homes)," she said.

Maximinio Andrade, who lives with his parents and siblings — 14 family members in all — near the slide walked down the steep street pushing a flat-screen television on a hand cart. He had not been home at the time of the landslide, but feared thieves would enter now that the surrounding homes had been evacuated.

“They’ve already started stealing from the destroyed homes,” he said.

National Guard troops and rescue teams carrying lengths of rope made their way through narrow streets.

Images from the area showed a segment of the steep, green side of the peak known as Chiquihuite sheared off above a field of giant rubble with closely packed homes remaining on either side.

Mexico state Gov. Alfredo del Mazo said via Twitter that local, state and federal authorities were coordinating to secure the zone in case of more slides and to remove rubble to locate possible victims.

The landslide follows days of heavy rain in central Mexico and a 7.0-magnitude earthquake Tuesday night near Acapulco that shook buildings 200 miles (320 kilometers) away in Mexico City.