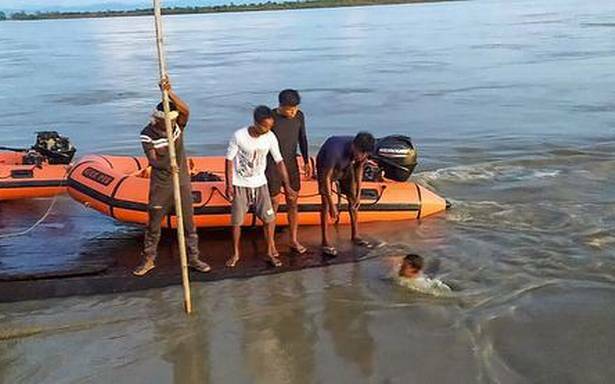 All but two of the 90 passengers of a ferry that sank after a mid-river collision with a larger ferry on the Brahmaputra on Wednesday have been rescued, the police said on Thursday.

A woman identified as a 28-year-old teacher had died on the way to the hospital after the collision at 4.15 p.m. off Neamatighat in Jorhat district. eastern Assam.

Officials said the National Disaster Response Force (NDRF) and State Disaster Response Force (SDRF) had engaged 31 rescue boats and 208 personnel, including 39 deep divers, to locate the missing persons. “We have alerted the police in the districts downstream of the Brahmaputra to try and rescue the missing persons. The Army has also pitched in, helping with rescue operations throughout the night,” Director-General of Police Bhaskar Jyoti Mahanta said.

According to the Assam State Disaster Management Authority, the NDRF and the SDRF teams did not find any person trapped after cutting through the capsized ferry.

Following the accident, the Inland Water Transport Department suspended three officials. Ferries operate under this Department but are known not to follow safety regulations or issue tickets to passengers for maintaining records.