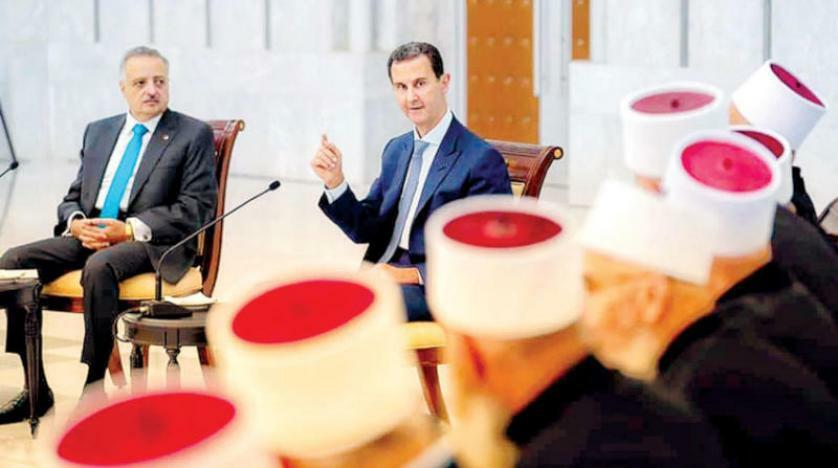 They represent the majority of Lebanese “who believe in the need and importance of the relationship with Syria and who have been loyal to it throughout the years of war,” he added.

Ties between the neighboring countries should not be affected by changing conditions on the ground, rather they must be strengthened, he continued.

“Syria will always stand by the Lebanese people and support it on various levels,” he stressed.

For his part, Arslan said the suffering of the Lebanese and Syrian people is the result of “new colonialism that is trying to violate the rights of people and dignities of nations.”

No one in Lebanon agrees to the severing of relations between Lebanon and Syria, he claimed.

Wahhab underscored the importance and standing of Syria in the region, saying the “Arabs won’t find a place among regional powers except with the return of Syria.”

The Lebanese delegation later visited the Druze-majority city of Jaramana in the Damascus countryside. They met with various political and Druze officials from the southern Sweida and Golan regions.

Sources told Asharq Al-Awsat that Druze spiritual leader in Sweida, Hikmat al-Hajiri, did not attend the meeting. No reason was given for his absence.

Activists from Sweida, however, attributed his absence to tensions and concerns over the eruption of infighting in the region.

The tensions stem from ongoing negotiations taking place between the counter-terrorism force, affiliated with the Syrian al-Liwa Party, and National Defense Forces (NDF) over returning military vehicles that were seized by the force.

In return, a member of the counter-terrorism force, who is being held by the state security forces, would be released.

Clashes had erupted on Saturday between the Syrian al-Liwa Party and NDF in al-Harisa town in eastern Daraa on Saturday.

Six members of the NDF were wounded. The NDF was forced to retreat from the town and they set up checkpoints inside Sweida city on the road leading to the provinces’ eastern countryside.

The NDF also brought in more members and harassed pedestrians in regions held by the counter-terrorism force. People were assaulted and four civilians were kidnapped, forcing their relatives to surround the headquarters of the NDF in Sweida city to demand their release. They threatened to resort to force if their demands are not met.