Ask Us What We’ve Seen 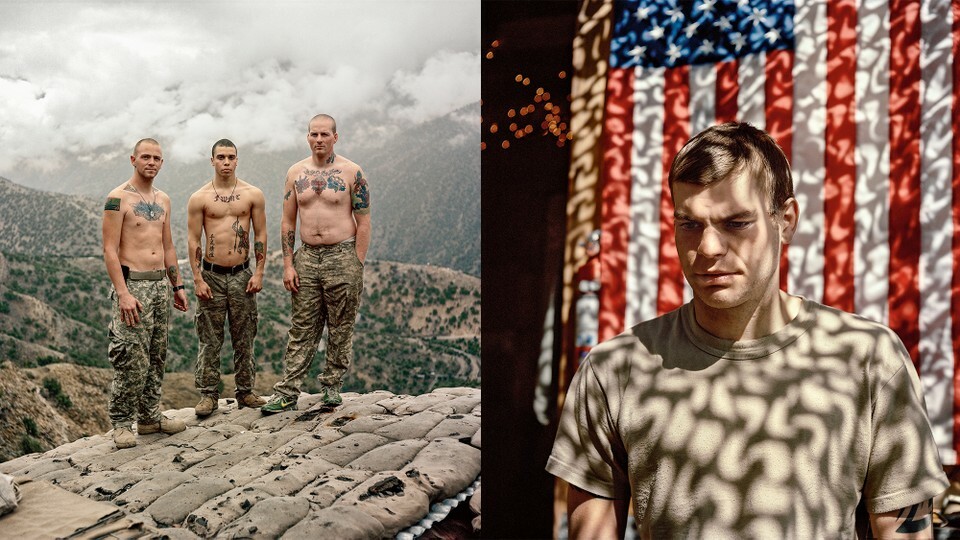 In 2009 and 2010, while on assignment in Afghanistan’s Helmand, Kunar, and Wardak provinces, the photographer Adam Ferguson took a break from his journalistic work documenting the war to create portraits of American service members.

The movement that accompanies a firefight is exchanged for stillness in these images. Yet violence stalks them. In one, a Marine rifleman holds his helmet in his hand, his eyes shielded behind dirt-smudged glasses. We don’t see him taking cover in the flooded irrigation ditches that crisscross Helmand province, but if we look closely, we can see that his trousers are ripped, and if we look closer still, we can see that his boots are soaked all the way through. “The quiet moments can be the loudest,” Ferguson says.

In another photo, 19-year-old Lance Corporal Nicholas Edwards exhales cigarette smoke between patrols in the district of Marjah in 2010. “I was a baby back then,” Edwards said when we spoke by phone recently. “Some days it feels like an entire lifetime ago. I look at the photo and I’m like, Who is that guy? ” I asked Edwards about the tattoo on his chest. “Which one?” he responded. The boy in the photo is not the man on the other end of the telephone, who now has several tattoos on his chest. After I clarified that I was asking about the cluster of headstones, he told me that it honors his father, who died when Edwards was 12—his first real experience with death, but not his last. About halfway through that 2010 deployment, enough Marines in Edwards’s unit had been killed or wounded that it needed combat replacements in order to remain in the field.

In the far east of the country, Ferguson photographed three bare-chested soldiers standing on the sandbagged roof of Outpost Restrepo, with the Korengal Valley—the Afghan War’s notorious “valley of death”—spread below them. (Units in the Korengal endured some of the highest casualty rates of the war, which has now come to a conclusion. As the last American GIs departed the country, the Taliban overran the Afghan forces that the U.S. had trained and backed, reestablishing control of the nation with astonishing speed.) The soldier on the right, Sergeant Thomas Richardson, wears a pair of green Nikes. “Your feet got sore humping up and down those mountains,” he remembers. “Guys who forgot to bring sneakers wound up making sandals out of rubber and tape so they could rest their feet between patrols.”

I also served in and around the Korengal, and recall the sneakers I used to wear between patrols. That detail brings to mind others, like how in firefights we had to dodge not only bullets but also the shards of granite that flew off the mountain walls every time a Taliban bullet hit nearby, as if the mountain itself were trying to kill us too.

There is a sameness to these portraits, which is in no way a criticism; in fact, it’s what lends them their cumulative power. The torn uniforms. The fresh tattoos. The quirks, like a pair of green sneakers. And a request, one that each subject seems to be making of the viewer: Ask us about these details. Ask us where we’ve been, and what we’ve seen.

This article appears in the October 2021 print edition with the headline “The Quiet Moments.”