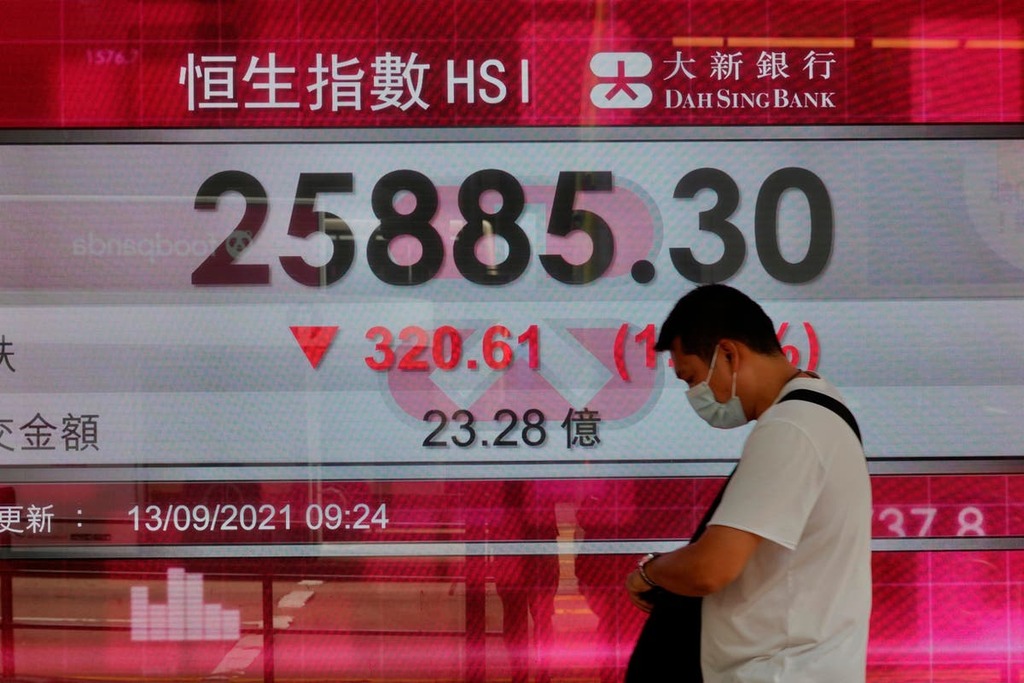 Japan reported its wholesale prices were near a 13-year high in August, adding to concerns over inflation as the country prepares for a leadership transition.

Prices have surged in the world's three largest economies, and elsewhere, as supply chain troubles, shipping bottlenecks and other disruptions arising from the pandemic hinder a return to normal growth.

“Cautious sentiments largely follow through with the downside move for U.S. markets last week, amid growth concerns along with rising inflationary pressures," Jun Rong Yeap of IG said in a commentary.

Price pressures add to the likelihood that the Federal Reserve and other central banks might move sooner to nudge interest rates up from the ultra-low levels they have been kept at to help fend off the worst impacts of the pandemic.

Stocks have traded in a narrow range for several weeks as many investors stick to the sidelines waiting to get a fuller understanding of where the economy is headed and how the pandemic is impacting businesses.

U.S. inflation at the wholesale level climbed 8.3% last month from August 2020, the biggest annual gain since the Labor Department started calculating the 12-month number in 2010.

Federal Reserve policymakers have said they believe inflation this year would be temporary and is a result of the economy recovering from the pandemic. However, persistently high inflation could force the Fed’s hand to start pulling back on its bond-buying program and low interest rate policy sooner than anticipated.

The pandemic remains in the forefront of investors’ minds, as hospitals fill up in the South and other parts of the country. President Joe Biden announced Thursday that companies with more than 100 employees would be required to have their employees vaccinated or do weekly testing, an announcement big companies have been willing to embrace.

Apple fell 3.3% after a federal judge ordered the iPhone maker to dismantle part of the competitive barricade guarding its closely run app store, which is one of its biggest moneymakers.

In other trading Monday, U.S. benchmark crude oil added 25 cents to $69.97 per barrel in electronic trading on the New York Mercantile Exchange. It jumped $1.58 to $69.72 per barrel on Friday.