Hong Kong (AFP) - Asian markets mostly fell Thursday as Chinese Premier Li Keqiang warned the world's number two economy was in some ways worse off now than during the early days of the pandemic.

Li's comments dealt a blow to confidence from the start and overshadowed a positive lead from Wall Street fuelled by minutes indicating a less hawkish stand from the US Federal Reserve.

The wind was immediately taken out of traders' sails as they digested the warning, which comes as China persists with a zero-Covid policy to eradicate the fast-spreading Omicron virus variant.

The economic agony caused by lockdowns and other strict containment measures hammered growth across China and sent shockwaves globally as key supply chains were brought to a halt.

Data in recent weeks have shown that a series of pledges by Beijing to kickstart growth has essentially fallen flat owing to a lack of concrete action, while analysts say the easing of the Covid policy was the only thing investors wanted to see.

"Economic indicators in China have fallen significantly, and difficulties in some aspects and to a certain extent are greater than when the epidemic hit us severely in 2020," Li told an emergency meeting Wednesday with representatives from local governments, state-owned companies and financial firms.

He also urged officials to work to pull unemployment down.

There is a general feeling among commentators that China's economic growth will fall well short of the government's target of about 5.5 percent.Expansion came in at 2.2 percent in 2020.

S&amp;P Global Ratings this month lowered its full-year growth forecast for China from 4.9 percent to 4.2 percent, while Nomura analysts warned in a recent note that there is "increasing potential for negative GDP growth in the second quarter".

Economists at Goldman Sachs said: "Chinese policy makers are in greater urgency to support the economy after the very weak activity growth in April, anaemic recovery month-to-date in May, and continued increases in unemployment rates."

Hong Kong, Tokyo, Sydney, Seoul, Taipei and Wellington were all down, while Shanghai, Mumbai, Singapore, Bangkok and Manila edged up.

London, Paris and Frankfurt were up in early business.

Traders had been given a positive lead from Wall Street as minutes from the Fed's May policy meeting indicated that while officials would likely hike rates by 50 basis points at each of the next two gatherings, they were aware of the impact on the economy.

With inflation surging, the central bank -- and others around the world -- has been forced to tighten policy but that has hammered markets and fuelled fears of a recession.

The minutes also made no mention of a 75-basis-point lift, providing some relief to beleaguered investors.

"If inflation gets tame enough over summer, there may not be continued raising of rates," said Carol Pepper of Pepper International on Bloomberg Television.

She added that the long-feared era of stagflation -- when prices rise but growth remains flat -- was unlikely.

"I think we are going to be in a situation where inflation will start tapering down and then we will start going into a more normalised market," she said.

The ruble sank around five percent after Russia's central bank cut its key interest rate Thursday to 11 percent from 14 percent following an emergency meeting, as authorities seek to rein in the unit which has surged in value despite the conflict in Ukraine.

Key figures at around 0820 GMT 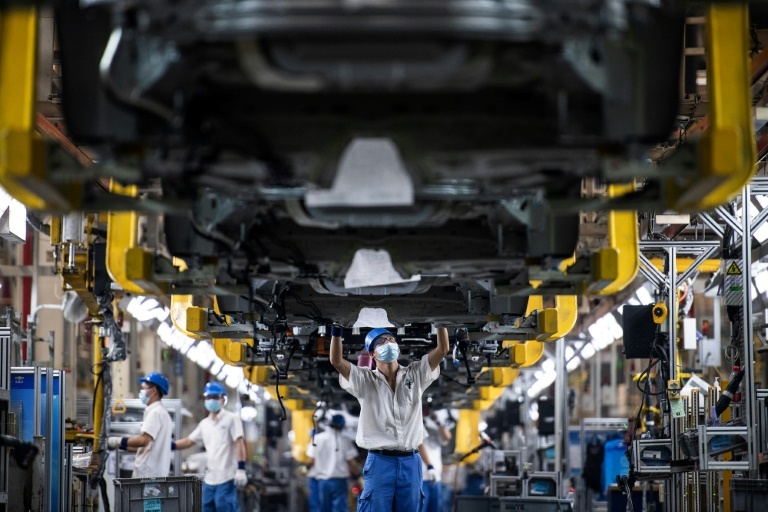 AFP
One subscription that gives you access to news from hundreds of sites
Stocks diverge, ruble slides tracking economic unrest

London (AFP) - European and US stock markets rose Thursday after a mixed Asian showing, as traders assessed chances of…