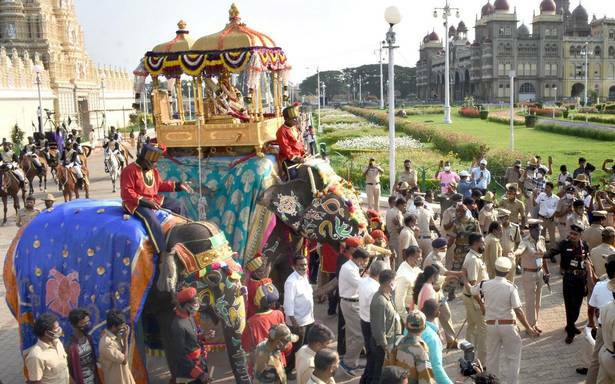 Ashwathama is making his debut in Mysuru Dasara festivities here as the elite member of the jumbo team after the Forest Department zeroed in on the elephant from Doddaarave camp. Within four years of its capture from Sakleshpur forests, the 38-year-old jumbo was chosen for Dasara tasks.

The 2.85 m-tall Ashwathama, taller than howdah-elephant Abhimanyu, is controlled by mahout Shivu. It was caught in 2017 in Hassan forest range. It weighs around 3,630 kg.

It is Abhimanyu’s second year as the ‘Ambari’ elephant. After taking over the mantle from Arjuna, who was rested due to age, last year, the 4,720 kg tusker perfectly carried out its maiden task of carrying the 750 kg golden howdah in the low-key festivities last year. The 58-year-old Abhimanyu from Mattigodu camp was captured over 51 years ago at Hebball forests in Kodagu. It is known for its acumen of capturing wild tigers or elephants straying into human landscape.

At 4,420 kg, Gopalaswamy is the second heaviest Dasara elephant after Abhimanyu. This 38-year-old jumbo was caught at Yattooru near Sakleshpur in 2009. It has been taking part in Dasara since 2012. Gopalaswamy also helps capture wild elephants.

A member of Dasara jumbo team for the last 18 years, Vikrama, 58, has been taking part as ‘Pattada Ane’ in the celebrations since 2015. This elephant was captured in 1990 at Doddabetta.

Captured in Yasaloor in Hassan district, Dhananjaya, 43, from Dubare camp in Kodagu has been participating in Dasara for the last three years. The 2.92 m tall tusker also helps in capturing wild elephants.

Among the female elephants, , 44, Kaveri is the oldest and has been playing the role of a ‘kumkhi’ (companion) to the lead elephant in Jamboo Savari for last nine years. From Dubare camp, Kaveri weighs 3,220 kg and was captured in Aadinadoor in Somwarpet in 2009.

Chaitra and Lakshmi are from Ramapura jumbo camp. Chaitra made a Dasara debut in 2018 and Lakshmi in 2019. Lakshmi, 20, was separated from its mother in the forests and was taken care of by the department.