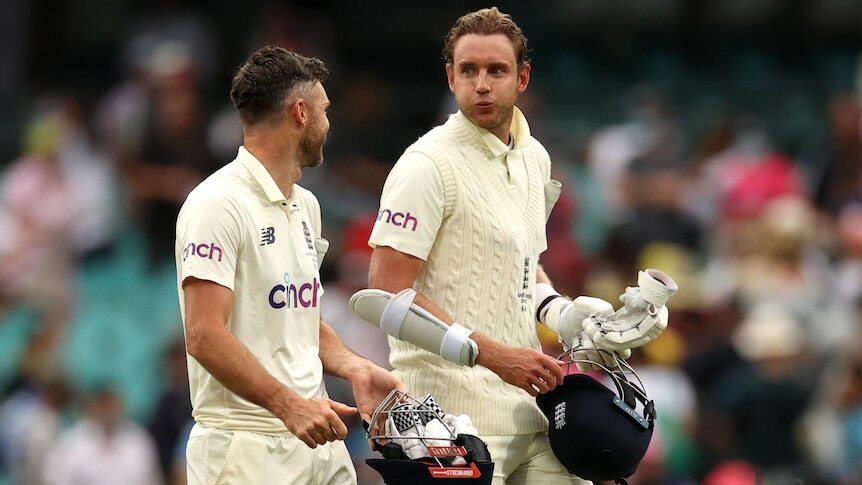 England has batted out day five of the fourth Ashes Test to salvage a draw and avoid going 4-0 down in the series.

The last recognised batter, Jonny Bairstow, was dismissed with just over 10 overs left but Stuart Broad and James Anderson saw them home with just one wicket left.

Usman Khawaja was named player of the match for twin centuries on his return to the Test side.

With 98 overs to be bowled on day five, 10 wickets required for Australia to win, and 358 runs needed for English victory, all three results were on the table at the start of the day. But a post-lunch rain delay put paid to any dreams of a miracle win for the tourists, who were left aiming for a draw.

In the first session, Zak Crawley and Haseeb Hameed actually put together England's biggest opening partnership of the series, but it ended on 46 when Hameed, three overs after being dropped by Alex Carey, edged Scott Boland behind and the keeper pouched his second chance.

Dawid Malan slowly made his way to 4 off 28, before he played back to Nathan Lyon and was clean bowled by a ball that skidded low and straight.

Crawley became the first England opener to reach 50 in the series, but was the third wicket of the morning when he was trapped LBW by all-rounder Cameron Green, and wasted an English review in the process.

Captain Joe Root and Ben Stokes made it to lunch, and the rain arrived in the break, hanging around and robbing the game of an hour of play.

They put on 60 runs together, but Boland continued the stellar start to his Test career by taking Root's wicket for a third successive innings, once again edged behind to Carey.

That reunited the heroes of England's first innings, Ben Stokes and Jonny Bairstow, and they looked similarly solid as they did on day three, albeit in less attacking fashion, taking England into the final session with six wickets in hand.

Stokes was eventually prised from the crease by a sharply bouncing and turning Lyon delivery that he just bunted to Steve Smith at slip.

Another 10 overs were knocked off the tally by Jos Buttler and Bairstow, before Cummins changed the game in the space of three deliveries.

First he bowled an enormous in-swinger that found Buttler's pad, but was initially given not out on the basis of two noises. Cummins reviewed and the replays showed Buttler had, in fact, hit his shoe with his bat and the ball collected nothing but pad.

With Buttler gone, Mark Wood strode out and received another devastating in-swinger right on his front foot — plumb LBW. He too reviewed, under duress from Bairstow, but the replays again showed he was very out.

Australian fans would have had flashbacks to Headingley 2019 when Jack Leach walked to the crease with 17 overs left, and he bedded in with Bairstow for half an hour.

But it was Bairstow's resistance which gave out, edging that man Boland to Marnus Labuschagne at silly mid-off.

It left Leach, Broad and, potentially, next man in Anderson 64 balls left to survive to salvage a draw, but Leach could not make it.

With light fading and three overs left, Cummins was told he could only bowl spinners, and turned to part-timer Smith, who got his first Test wicket since 2016 when he found Leach's outside edge and David Warner snaffled a sharp chance at first slip.

Lyon bowled the penultimate over and could not remove Broad, with Smith unable to repeat his heroics in the last six balls, as Anderson blocked them out for a thrilling draw.

The fifth Test is a day-nighter starting in Hobart on Friday.

Look back at how the exciting fifth day unfolded in our live blog.

FOURTH ASHES TEST AT THE SCG

Australia leads the Ashes 3-0 with one to play

So, England have managed to "restore some pride in the badge" just as Joe Root had called for - and then some. A terrific performance in an enthralling Test match.

Sure, there were some weather frustrations throughout this Test, exposing some of Test cricket's most antiquated idiosyncrasies, but at the end of five days to come down to the final ball of the final over? Wow. Test cricket at its very best.

There's one more Test to play, in Hobart next week. I think I'm going to need to lie down until at least that starts, but you can rest assured that we will be back firing on all cylinders to bring you all the action from what will be an historic Test on the Apple Isle.

Dean Bilton will somehow analyse all of that, his piece will be live on the ABC Sport website later this evening.

However, it's time for this live blog to close. From Jon Healy and me, Simon Smale, we hope you enjoyed the coverage and we'll see you for the Hobart Test on January 14.

Usman Khawaja is man of the match

With two hundreds, who else was it going to be.

He says from a personal perspective the game could not have gone much better.

"It was a terrific game. It was a great fight from England.

"Test match cricket, it's the best, going right down to the wire. It could have gone either way, so couldn't ask for much more."

He talks of his love for Test cricket.

He says "it's a great game ... there's nothing harder than Test cricket".

"When you perform like that you know you've done something right."

'It was a really hard fought, Test match cricket': Cummins

Now Pat Cummins is up.

"Obviously we were really keen [to win the Test]," Cummins says.

"But that was a great game of Test cricket.

We got close, a bit less weather, might have got us there, but it was a  really hard fought, Test match cricket."

He says the weather forecasts were "hopeless" with a smile on his face.

He says he thinks Australia needed 400 runs as the pitch was not misbehaving enough to risk a lower chase.

He says Steve Smith "definitely talked himself" into bowling the final over.

Jos Buttler out of the final Test

Joe Root says Jos Buttler's injury is pretty serious and that he will be going home.

'It's been a really difficult tour til now': Joe Root

"It was really important [to get the draw]," Root says.

"It's been a really difficult tour til now, we've obviously found it tough at times, but one thing that I"m really proud of it the determination, the character, the way we stood up today and got a result out of this game.

"I said at the end of the last game to put some pride back into the badge and I think the way that we went about things in this game, we did that in spades.

"There's still a long way to go as a team and we've got to make some big improvements."

He praises Jonny Bairstow and Zak Crawley and the players who have battled through what he described as some "quite difficult injuries" namely middle order batters Jos Buttler, Bairstow and Ben Stokes.

I haven't for an hour and a half.

That was an intense draw

Well played England, that was a tense last session.

A fair and just result. Test cricket at it's best. I'll remember this day's play for quite a while.

Oh for goodness sake, sport shouldn't make you feel like this.

England, with backs against the wall have salvaged some pride and won plenty of admirers after a tremendous display of Test match cricket.

Sure, there will be questions about whether Australia were too conservative with their declaration yesterday.

Sure, you could say Australia's bowlers should have targeted the stumps more with the tail in.

But what you cannot say is that England have not deserved that.

After a horrific tour so far, with players bandaged and bruised, both physically and mentally, that was so important for these players and touring staff.

Hats off to them.

Final ball of the Test!

ENGLAND SAVE THE TEST!

Smith delays on his run up.

He skips in and Anderson defends!

There is a field adjustment.

Anderson fends into the off side.

Oh the tension. I can barely watch.

Anderson defends into the off side again.

Khawaja goes down to talk to Smith, who was rushing a little bit there.

Anderson jabs the bat down on the ball!

Jimmy Anderson has been not out 102 times in Test cricket. A record.

Steve Smith comes in and Anderson flicks the ball to the leg side field.

Broad is forward defending with that surging defence that did so well for him last over.

He defends the next.

CUT THE TENSION WITH A KNIFE!

BEATEN! Outside off! Everyone went up. The crowd went up! But the thickness of a sticker is all that Lyon was away from getting the edge.

Another solid defensive shot from Broad. Will he try and take the strike? He's stepping back and does a bit of gardening.

ONE OVER TO GO!