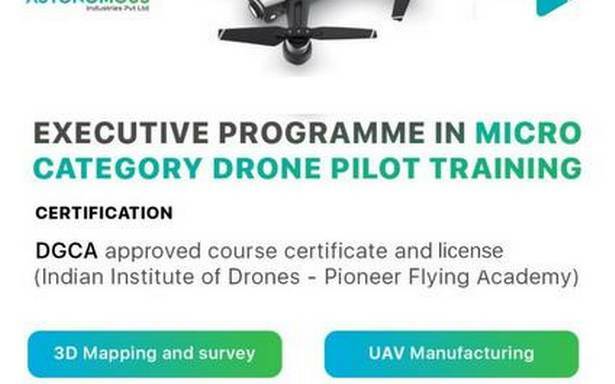 The day is not far off when e-commerce portals deliver orders at doorsteps using drones.

With such an arrangement already being tried out on a trial basis in some metro cities and the vista of opportunities offered by drones ever expanding, the State government’s Additional Skill Acquisition Programme (ASAP) Kerala has expanded its executive programme in micro category drone pilot training to Ernakulam district as well.

“We will open admission as soon as we get the requisite clearances from the authorities concerned for running the course on the campus of the Edappally Higher Secondary School. We have already received over 100 registrations,” said Shanthanu P., district programme manager, ASAP.

The maiden batch of the 96-hour course in operating micro category drones weighing up to 2 kg has already been launched in Kozhikode. The programme will be run in collaboration with the Kozhikode-based Indian Institute of Drones and the Autonomous Industry.

“The ones successfully clearing the course will be eligible for licence for operating drones issued by the Directorate General of Civil Aviation (DGCA), which is mandatory since 2018,” said Anandulal Sankar, programme manager, ASAP, Ernakulam.

The programme entailing a course fee of ₹43,000 will be open to SSLC pass-outs aged between 18 and 60 years. Considering that a batch cannot have not more than 20 candidates considering the logistics and complexities involved, the ones who pay the fee upfront will make it to the first batch in the district.

Significantly, a lot of young women, including young graduates, are evincing interest in the programme.

The multi-purpose scope of drones is increasing by the day. For instance, the National Highways Authority of India (NHAI) and the Agriculture Department are using it for aerial surveys, while the KSEB also uses them for facilitating drawing of electric lines over wide waterbodies. “Though there is considerable demand for drone operators, the dearth of licensed authorised operators remains a challenge. Since this is an evolving area, we may not be able to guarantee the candidates assured placing though our partners will be able to keep them posted about the vacancies reported with them,” said Mr. Sankar.