Asakusa geisha gearing up for return to the stage 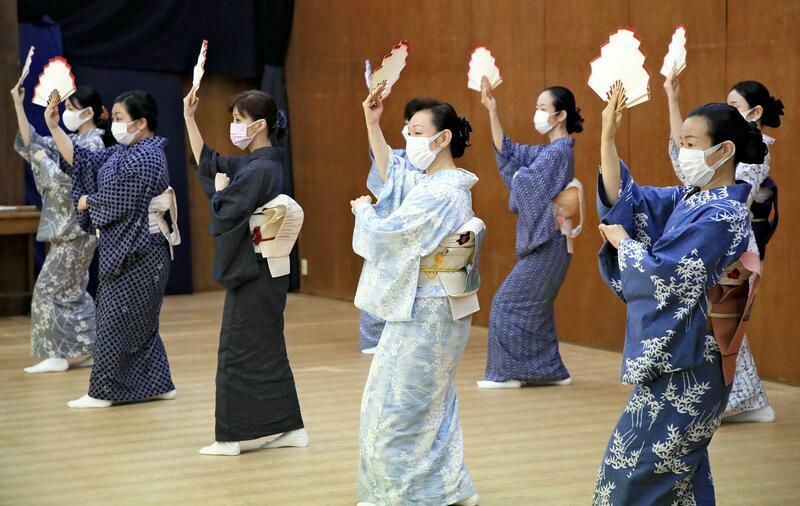 "Once the flame of traditional culture goes out, relighting it is really difficult," said Seiko, who has been a geisha for 23 years. "We must keep it burning."

A group of geisha is back in full training for their first public performance of the Asakusa Odori traditional dance in about two years -- an event they hope will help reenergize the geisha world hit hard by the pandemic.

"Lower your hand a little more," the instructor told a geisha who was training in a hall in the Asakusa district of Taito Ward, Tokyo, at around noon on Sept. 28. The government decided that day to lift the pandemic-related state of emergency. "Now stand about half a step to the left."

The state of emergency was lifted on Oct.1, giving the green light for performances to return in front of live audiences.

About 10 geisha gracefully danced in time to a song played on a shamisen three-stringed lute in a full rehearsal for Asakusa Odori performances scheduled for Oct. 8 and 9. With this major event looming, each geisha's movements and their timing with the music were carefully checked.

Asakusa Odori started in 1950 to help the district recover after World War II by holding an event in which geisha, who mainly danced for diners at luxurious Japanese-style ryotei restaurants, gave performances featuring dancing and music in front of the general public. The Asakusa Odori is held only once every year or every few years, but the 2020 event was canceled due to the pandemic.

Seiko is one of the geisha who will take to the stage. She began dancing when she was about 3. After graduating high school in Niigata Prefecture, she landed a job at a local construction company, but when she traveled to Tokyo to visit a friend, she saw a flyer advertising the geisha of Asakusa.

"I could make a living from dancing," Seiko recalled thinking. She set her heart on becoming a geisha.

Seiko had loved dancing since she was a child and often performed for her grandparents and other people. She never forgot how happy she felt when she saw the joy her dancing gave others. Her parents initially opposed her ambition to pursue her passion for dancing, but Seiko eventually won them over and embarked on her new career in the geisha world.

More visitors from overseas had been among the audience in recent years, and Seiko felt proud her talents were "conveying Japanese culture to the world." Everything was going swimmingly -- then the pandemic struck.

One event after the other at which the general public was able to watch the geisha dance were canceled since the spring of 2020. Many ryotei restaurants were forced to suspend operations because they could not anticipate when or how many customers might come. Opportunities for the geisha to dance evaporated.

During this time, Seiko and the other geisha danced for online events. However, something was missing.

"The mood created when the geisha and the customers are facing each other is what gives this dance its charm," Seiko said. "There were times when I lost sight of my goal."

During those challenging times, a comment from a regular customer kept her going: "A real geisha will never disappear."

Pride in protecting and continuing the traditions of the Asakusa geisha had begun to grow within Seiko and her fellow geisha.

"When customers can come back to a ryotei restaurant with peace of mind and watch me perform, I want to show them the skills of a real geisha," Seiko said.

Asakusa Kenban, the Asakusa geisha union, has about 20 registered members. None of these geisha quit during the pandemic; instead, each used that time to hone their own skills. In July, they got together to resume full training in preparation for their return to the stage for public performances.

The upcoming Asakusa Odori, the first in two years, will be held at the Taito Ward Lifelong Learning Center. About 150 tickets -- half of the facility's capacity -- were available, and all are reserved seats as part of measures implemented to prevent the spread of coronavirus infections. Most tickets have already been sold.

Sayoko, a geisha who has been in the industry for 48 years and leads the group, is excited about the event.

"We have all dedicated ourselves to this training with a single purpose," Sayoko said. "Thorough infection precautions will be in place at the event, so I hope the audience will feel reassured and enjoy our performance."