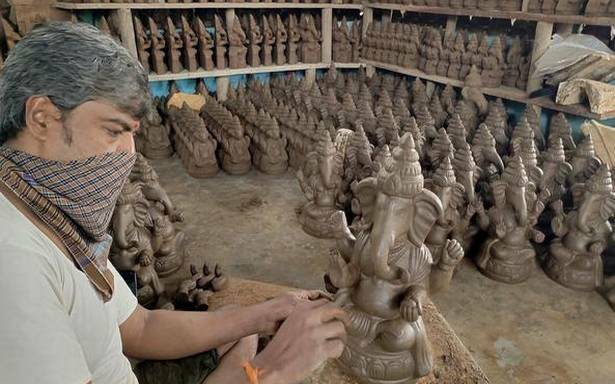 Traditional aritsans engaged in making Ganesha idols for a living have reduced their output to less than a third of their normal output due to the pandemic.

The Gowri-Ganesha festival will be celebrated on Thursday and Friday and the artisans aver that there is no demand for large and life-size idols which used to adorn every street corner in the pre-pandemic times. The government restriction on displaying Ganesha idols in public also resulted in the demand fizzling out.

But there is a traction in the demand for eco-friendly idols used by devotees for worship in their respective homes. These idols have caught the imagination of the public since the last few years and they account for almost 80 per cent of the total output.

Puttaswamy, a traditional artisan based in the city, said eco-friendly idols constitute the bulk of their production but the overall sales of Ganesha idols are relatively less due to the pandemic. “People who worship in their homes are buying the idols but there was no order from organisations and Ganapathi Sanghas or bhakta mandalis for large-sized idols this year’’, he said.

A number of artisans endured a loss last year as they had produced the life-sized idols but there were no takers. Hence this year they have desisted from making such idols to be on the safer side, according to Revanna of K.T. Street who is also a traditional artisan.

Belonging to a family that has been making Ganesha idols since generations, he said as against nearly 2,000 idols that he used to make every year during pre-pandemic times, he is content with about 500 idols this year.

There are about 150 to 200 families who belong to the traditional artisan fraternity but a majority of them have quit the profession in search of alternative jobs. But for those who have persisted with the traditional vocation, making Ganesha idols keeps them occupied for almost 7 to 8 months a year. “We take a break soon after the festival but the work for the following year’s festivities commences soon after Ayudha Puja and Dasara’’, according to Puttaswamy.

There is a general consensus among the traditional artisans that thrust on the use of eco-friendly idols and the ban on plaster of Paris idols has helped the community to keep itself afloat. But for now, the increase in the price of raw materials and transportation charges have impacted their economic returns.

However, in the years ahead when the pandemic ceases to be a public health concern, the artisans expect that their traditional vocation will be more economically profitable.