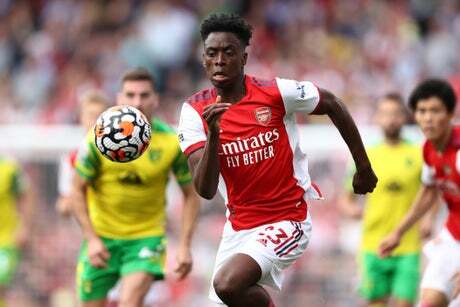 Arsenal claimed their first Premier League win of the season courtesy of a 1-0 victory over Norwich.

Simon Collings was at Emirates Stadium to assess the Arsenal players...

A solid, if quiet, afternoon for the goalkeeper on his home debut. Looked calm on the ball and he played out from the back well.

A good debut from the Japan international, who has barely trained this week. Looks like he can be a threat going forward.

A strong showing from the centre-back. Played out from the back with real class. Some of his passing was a delight.

A first game of the season for the Brazilian and he did well all things considered. Seems to have a decent enough understanding with White.

Solid stuff from the Scot, who got forward as much as he could. Is forming a nice relationship with Bukayo Saka ahead of him.

Taken off before the end but he was excellent. Looks ready to play at this level and will expect to push Granit Xhaka very hard for a starting spot.

Was handed the start in central midfield he has craved, but struggled. Shifted to right-back towards the end of the game.

His performance dipped a little bit before half-time, but he was otherwise very lively. Worked exceptionally hard off the ball too.

Was bright and sharp, but his performance perhaps lacked a little bit of cutting edge. Promising signs though.

Solid and reliable from Saka. On another afternoon he could have bagged himself a goal too.

He got the winning goal, but he should have had one or two more. Still not his usual self, but that goal will help his confidence.

He is just a Rolls-Royce of a midfielder. A cut above the rest and passing was excellent when he came on.

A very good cameo from the attacking midfielder. Almost scored but Tim Krul denied him with a fine save.