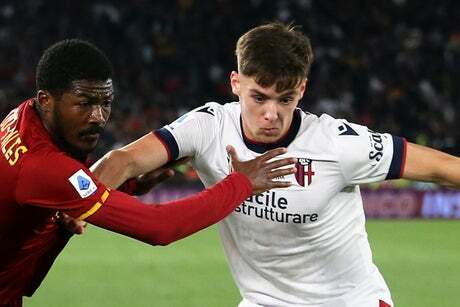 Todd Boehly’s Chelsea takeover is closer than ever to being completed, with the Government and the Premier League on the…

Arsenal's pursuit of Bologna left-back Aaron Hickey looks set to progress further this week with the Serie A side's chief executive set to fly into the capital ahead of the North London Derby on Thursday night. Richard Begone will attend the crunch game before attending talks after full time.

football.london understands Scottish left-back Hickey is one name that has caught the attention of Mikel Arteta and Edu ahead of the summer transfer window. While Kieran Tierney has impressed this season, injuries have hampered the former Celtic man's impact at the Emirates with his backup, Nuno Tavares, attracting regular criticism.

It has been reported that the Gunners are not alone in their pursuit of Hickey, however, with Napoli also looking to sign the talented 19-year-old. Hickey has scored five goals in Serie A for Bologna this season and has previously been deployed as a right-back, centre-back and central midfielder.

The player himself, however, is determined to block out the noise, recently telling Sky Sports: "I do see quite a lot of talk. One of my friends text me today saying 'what's happening here, lad?' They're sending me stuff for transfers and talks, but it's nice to know there's interest from other clubs. It gives you some confidence and stuff. You just keep your head down and focus in football."

But TuttuoBolognaWeb have reported that Hickey's future could take a step closer to being decided this week. They say that Bologna CEO Richard Begone is scheduled to meet with Arsenal representatives after their clash with Tottenham on Thursday night, with Begone in attendance at the Tottenham Hotspur Stadium as a guest of the visitors.

A win for Arsenal secures Champions League football for the 2022-23 campaign and makes them an even more appealing destination during the summer transfer window in the process.