Apart from mother tongue, it is essential to learn Hindi: Venkaiah 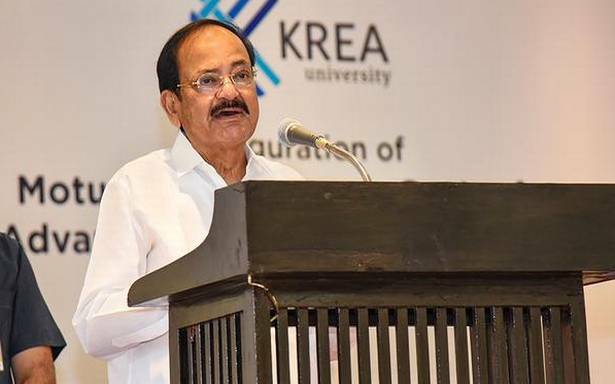 Inaugurating the Moturi Satyanarayana Centre for Advanced Study in the Humanities and Social Sciences at Krea University (KU), he said the key purpose of knowing a language was to communicate and a large number of people in India spoke Hindi.

“If you are not able to communicate with the larger sections of the country in the language known to them, then what is the purpose,” he asked.

Recalling his student days when he took part in anti-Hindi agitations and applied tar on a name board in Hindi, Mr. Naidu said he realised later in life after reaching Delhi that he had, in fact, applied tar on his own face, metaphorically speaking, by not learning Hindi.

“Later, I picked up Hindi. I could reach this position. If you want to grow, if you want to communicate your ideas to a larger section of the people, you must know their language,” Mr. Naidu said.

His simple principle when it came to controversies surrounding languages in India was “no imposition, no opposition.”

He said neither should any language be imposed on children nor should there be any opposition to a language.

He said it was most important for everyone to learn their mother tongue first. Apart from that, they should learn as many languages as possible, including Hindi. Acknowledging the importance of learning English in a globalised world, Mr. Naidu, however, said that there was a misconception that it was not possible to come up in life if one did not get educated in English.

Citing the examples of the President, the Prime Minister, the Chief Justice of India and himself, he said all of them got educated in their mother tongue in modest schools.

Lauding late Moturi Satyanarayana for his contributions as a freedom fighter, member of the Constituent Assembly, Rajya Sabha member and in the promotion of Hindi and Telugu languages, Mr. Naidu said he maintained highest standards in public life.

Stating that calibre, character, capacity and content were the qualities of leaders earlier, he said these had now been replaced largely with caste, community, cash and criminality.

The functioning of the legislative houses, including the Rajya Sabha, was of late disturbing.

Pointing out that the National Education Policy focussed on a holistic approach by breaking rigid barriers between professional and liberal education, he appreciated KU for adopting a similar vision.

The centre has been launched with an endowment by the family of Moturi Satyanarayana. Prem Kumar, his son-in-law, elaborated on the late leader’s contribution in promoting Hindi and Telugu. Highlighting his key role in the construction of Nagarjuna Sagar dam, Mr. Prem Kumar said this was often not recollected.

Mahesh Rangarajan, Vice-Chancellor, KU, said the creation of the centre was timely and far-sighted, in keeping with the institution’s mission of preparing humanity for an unpredictable world. Kapil Viswanathan, chairman, executive committee, KU, said the university shared common values with the Vice-President, which included passion for continuous learning, creation of new knowledge and deep commitment to public service and nation building.

Mukund Padmanabhan, former Editor of The Hindu and visiting Professor of Practice at KU, said Mr. Naidu had made his office more accessible to the public.