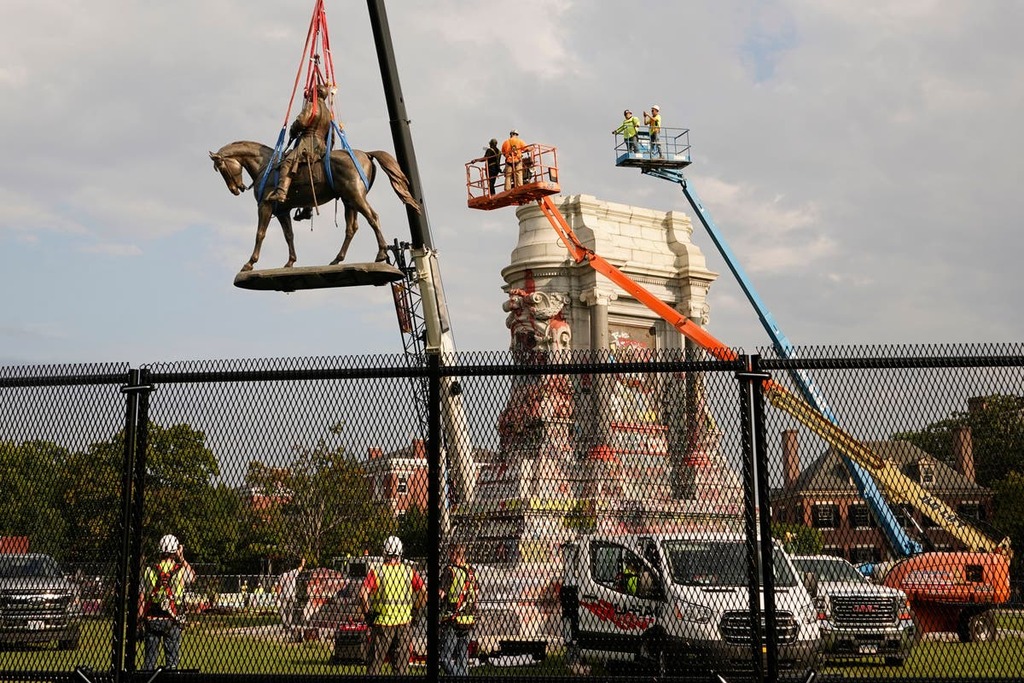 LOUISIANA POLICE DEATH-FEDERAL PROBE — As the Louisiana State Police reel from the deadly 2019 arrest of Ronald Greene — a case blown open this year by long-withheld video of troopers stunning, punching and dragging the Black motorist — an Associated Press investigation has revealed it is part of a pattern of violence shrouded in secrecy. An AP review of investigative records and newly obtained videos identified at least a dozen cases in which troopers or bosses ignored or concealed evidence of beatings, deflected blame and impeded efforts to root out misconduct. By Jim Mustian and Jake Bleiberg. SENT: 1,950 words, photos, video. An abridged version of 970 words is also available.

GULF-UNITED STATES-AFGHANISTAN — U.S. Defense Secretary Lloyd Austin says the al-Qaida extremist group that used Afghanistan as a staging base to attack United States 20 years ago may attempt to regenerate there following an American withdrawal that has left the Taliban in power. He said the United States is prepared to prevent an al-Qaida comeback in Afghanistan that would threaten the United States. By National Security Writer Robert Burns. SENT: 910 words, photo. With AFGHANISTAN-THE LATEST.

TEXAS-EXECUTION — A Texas death row inmate won a reprieve from execution for killing a convenience store worker during a 2004 robbery that garnered $1.25 after claiming the state was violating his religious freedom by not letting his pastor lay hands on him at the time of his lethal injection. The U.S. Supreme Court blocked John Henry Ramirez’s execution about three hours after he could have been executed. By Juan A. Lozano and Michael Graczyk. SENT: 800 words, photos.

VIRUS-OUTBREAK — The summer that was supposed to mark America’s independence from COVID-19 is instead drawing to a close with the U.S. more firmly under the tyranny of the virus, with deaths per day back up to where they were in March. The delta variant is filling hospitals, sickening alarming numbers of children and driving coronavirus deaths in some places to the highest levels of the entire pandemic. By Matthew Perrone and Dee-Ann Durbin. SENT: 840 words, photos.

HURRICANE IDA — The death toll in Louisiana from Hurricane Ida rose to 26, after health officials reported 11 additional deaths in New Orleans, mostly older people who perished from the heat. The announcement was grim news amid signs the city was returning to normal with almost fully restored power and a lifted nighttime curfew. By Kevin McGill and Melinda Deslatte. SENT: 940 words, photos.

SEPT 11-THE CONSPIRACY CONUNDRUM — There were, of course, conspiracy theories before 9/11 happened – the Kennedy assassination being the most prominent in recent American history. And the focus on conspiracy theories was on the rise in the years before 9/11, as exemplified by the intense popularity of "The X-Files" in the 1990s. But it was 9/11 — perhaps the biggest global conspiracy that has ever come into the public eye — that heralded the coming of age of an era in which suspicion became a reigning sentiment in mainstream American life. By David Klepper. SENT: 1,430 words, photos, graphic, video. An abridged version of 940 words is also available. Also see SEPT 11-BOSTON’S SCARS below.

NKOREA-MILITARY PARADE — Soldiers, civil defense forces and troops wearing gas masks and red hazmat suits paraded in North Korea’s capital in a celebration of the nation’s 73rd anniversary that was a marked departure from past militaristic displays. By Kim Tong-Hyung. SENT: 810 words, photos.

VIRUS OUTBREAK-VIRAL QUESTIONS-LONG COVID-KIDS — Symptoms that persist, recur or begin a month or more after a COVID-19 infection can affect children and teens as well as adults. By Medical Writer Lindsey Tanner. SENT: 330 words, graphic.

VIRUS OUTBREAK JAPAN — Japan is to extend an ongoing coronavirus state of emergency and less-stringent measures in most of the 33 areas until the end of September from their planned end on Sunday as the health care systems in Tokyo and other major cities remain severely strained despite signs of slight slowing in the infections. SENT: 370 words, photo. With VIRUS OUTBREAK-THE LATEST.

JUSTICE DEPARTMENT-TEXAS ABORTIONS — Foes of the new Texas law that bans most abortions have been looking to the Democratic-run federal government to be a saving grace — to swoop in to knock down one of the most restrictive abortion laws in the country. SENT: 970 words, photos.

CAPITOL BREACH-FENCE — Law enforcement concerned by the prospect for violence at a rally in Washington next week are planning to reinstall protective fencing that surrounded the U.S. Capitol for months after the Jan. 6 insurrection. SENT: 820 words, photos.

SEPT 11-BOSTON'S SCARS — Twenty years after the Sept. 11 attacks, Boston has never truly come to terms with its supporting role in the transcendent events of that day. SENT: 780 words, photos.

CONFEDERATE MONUMENT-TIME CAPSULE — Now that an iconic statue of Confederate Gen. Robert E. Lee has been taken down from its perch above Richmond’s Monument Avenue, crews plan to remove a time capsule from 1887 from its gigantic pedestal. SENT: 500 words, photos. With CONFEDERATE-MONUMENT-RICHMOND — Lee statue comes down in former Confederate capital.

TROPICAL WEATHER-ATLANTIC — Rain was pouring down on the Florida Panhandle as Tropical Storm Mindy made its way across the state. SENT: 220 words, photo.

ROBERT-DURST-MURDER-TRIAL — A prosecutor argued in a Los Angeles murder trial that Robert Durst the estranged heir to a New York real estate fortune, killed his wife and her death became the basis for his “playbook” on getting away with two other killings. SENT: 960 words, photos.

GAMBLING-ARIZONA — Arizona's first sports betting operations officially open for business in time for the start of the NFL season, with live wagers being taken on college and professional sports at the FanDuel Sportsbook. SENT: 600 words, photo.

NEW ZEALAND-SUPERMARKET TERROR ATTACK — Nobody in New Zealand was able to stop an extremist inspired by the Islamic State group from walking free from prison in July, and just weeks later, he grabbed a knife at an Auckland supermarket and began stabbing shoppers, injuring seven in a frenzied attack. SENT: 1,220 words, photos.

TAIWAN NAVY — Taiwan’s president oversaw the commissioning of a new domestically made navy warship as part of the island’s plan to boost indigenous defense capacity amid heightened tensions with China. SENT: 290 words, photos.

UNEMPLOYMENT BENEFITS — The Labor Department reports on the number of people who applied for unemployment benefits last week. By Economics Writer Christopher Rugaber. UPCOMING: 130 words after release of report at 8:30 a.m., photo.

FASHION-PROENZA-SCHOULER — Sailboats wafted by on the Hudson River and the setting sun sparkled on the water as Proenza Schouler celebrated a return to in-person fashion shows against the spectacular setting of New York’s buzziest waterfront locale, Little Island. By National Writer Jocelyn Noveck. SENT: 440 words, photos. With FASHION-PRABAL GURUNG — Prabal Gurung’s fashion show asks: Who gets to be a woman?