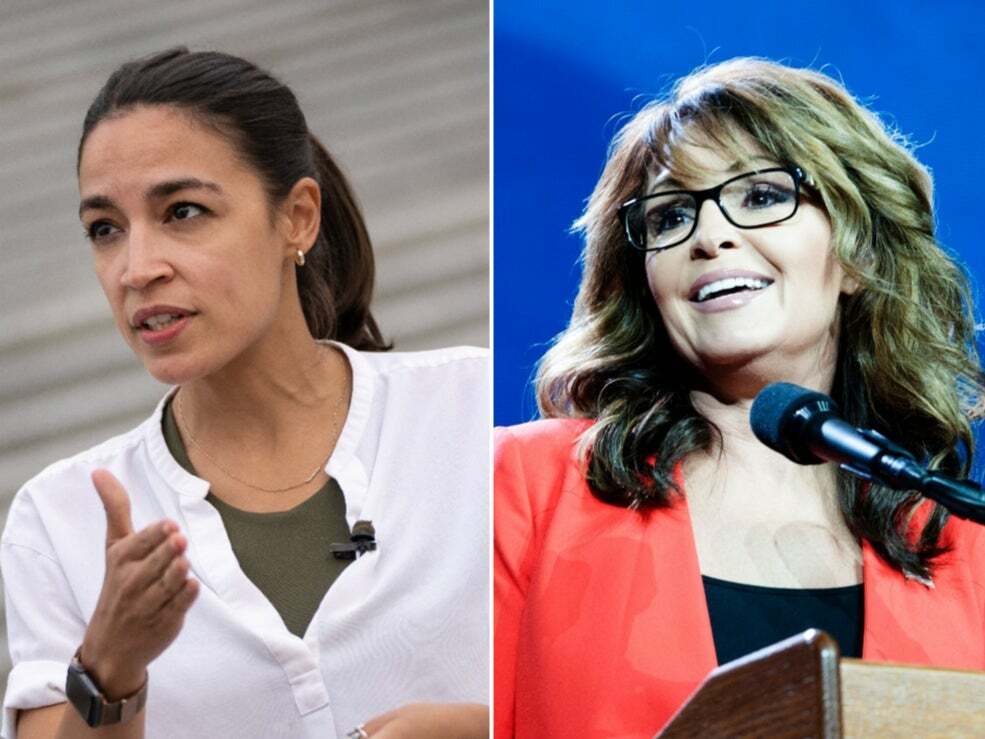 There’s no denying that Alexandria Ocasio-Cortez receives a lot of criticism from conservatives, including former President Donald Trump, Ted Cruz and Marjorie Taylor Greene just to name a few.

But another name AOC can now add to her long list – former Republican vice presidential nominee Sarah Palin (what a throwback).

In an interview with Fox News, Palin slammed AOC by calling her a “fake feminist” because of AOC’s criticism of Texas Governor Greg Abbott over his comments on the new abortion law that has been introduced in the state.

The new law prohibits abortions once medical professionals can detect cardiac activity (around six weeks) and before many women know they’re pregnant. The legislation makes an exception in the case of a medical emergency, which requires written proof from a doctor, but not for pregnancies resulting from rape or incest.

When asked why the law doesn’t make an exception for cases of rape and incest, Abbott said: “It doesn’t require that at all because obviously, it provides at least six weeks for a person to be able to get an abortion.” He then described rape as a crime and said Texas would “work tirelessly” to eliminate rapists off the streets.

AOC described Abbott’s comments as “disgusting” in an interview on CNN and went on to explain how he is not educated about a women’s menstruating body.

“He speaks from such a place of deep ignorance ... and it’s not just ignorance, it’s ignorance that’s hurting people across this country,” the New York Democrat congresswoman added.

Though AOC’s comments didn’t go down well with Palin who added in her Fox News interview that she was “embarrassed for her [AOC].”

“She is such a fake feminist ... She’s milking the whole female thing, and as a real feminist, I’m embarrassed for her,” Palin said.

“She is such a fake feminist ... She’s milking the whole female thing, and as a real feminist, I’m embarrassed for her.” pic.twitter.com/EvW9YJ8TQv

But in true AOC style, the congresswoman wasn’t going to let this dig slide and had the perfect zinger in response to Palin’s diss.

She tweeted: “I’m so sorry Sarah Palin is mad at me! In fact, to address this I set up a special hotline just for her.”

Along with her tweet, she included a video from her Instagram where she says: “Does my existence make you mad? Does the fact that, yes, I am a mouthpiece for the people of New York’s 14th congressional district upset you? Well, I have help for you - call 1-800-CRY-NOW, that 1-800-CRY-NOW.”

I’m so sorry Sarah Palin is mad at me! In fact, to address this I set up a special hotline just for her https://t.co/FGUWvdqt4T pic.twitter.com/Fcr8cYvEYT

In an epic move, AOC’s sarcastic hotline soon became a website, where people can donate to abortion and reproductive health providers in Texas.

In fact, we also set up a corresponding website - proceeds go to abortion and reproductive health providers in Texas: https://t.co/16yiomTbyD

Amazingly, over $250,000 has been raised for far - and hilariously it’s all because of Palin’s comments which have indirectly caused this page to be created and for money to be donated.

We’ve raised over $250,000 to Texas grassroots pro-choice organizers and healthcare providers so far. 🤗

People have since taken to Twitter to roast Palin after she described herself as a “real feminist” and there were a lot of laughing GIFs...

Did Palin just call herself "a real feminist"? 🤦🏾‍♀️ pic.twitter.com/Hoyux6UF4Z

— Wendy Get vaccinated, Save A Life (@chillibeanboy) September 9, 2021

There is a 0.00000000001% chance that if I asked any random person anywhere in the world to name a feminist, that person would respond with the name “Sarah Palin”. The ONLY person who would respond “Sarah Palin” is Sarah Palin. pic.twitter.com/ks5uYeeNz4

While Palin’s comments appear to have backfired, people took the opportunity to praise AOC for her brilliant response.

I never get tired of AOC dragging the right. Today's take down... Sarah Palin.

Oh, I needed to have a good laugh. Thank you 🙏

No one in the world would ever label Sarah Palin a feminist and her attack on Congresswoman AOC just reeks of jealousy, but AOC’s response just telling her to dial 1-800-Cry-Now is gold. 🤣👏

This is awesome! AOC set up a corresponding website for her "1-800-CRY-NOW Helpline" response to Sarah Palin's attack on her and they've already raised over $250K for Texas grassroots pro-choice organizers & healthcare providers (so far)!

turned a joke into raising 250,000 for grassroots organizations that are fighting for reproductive rights and access to safe abortions in Texas. we love to see it. https://t.co/lYzOMasQPH

omg this is fantastic https://t.co/Fuk836v1Qw

Think it’s fair to say AOC came out on top..