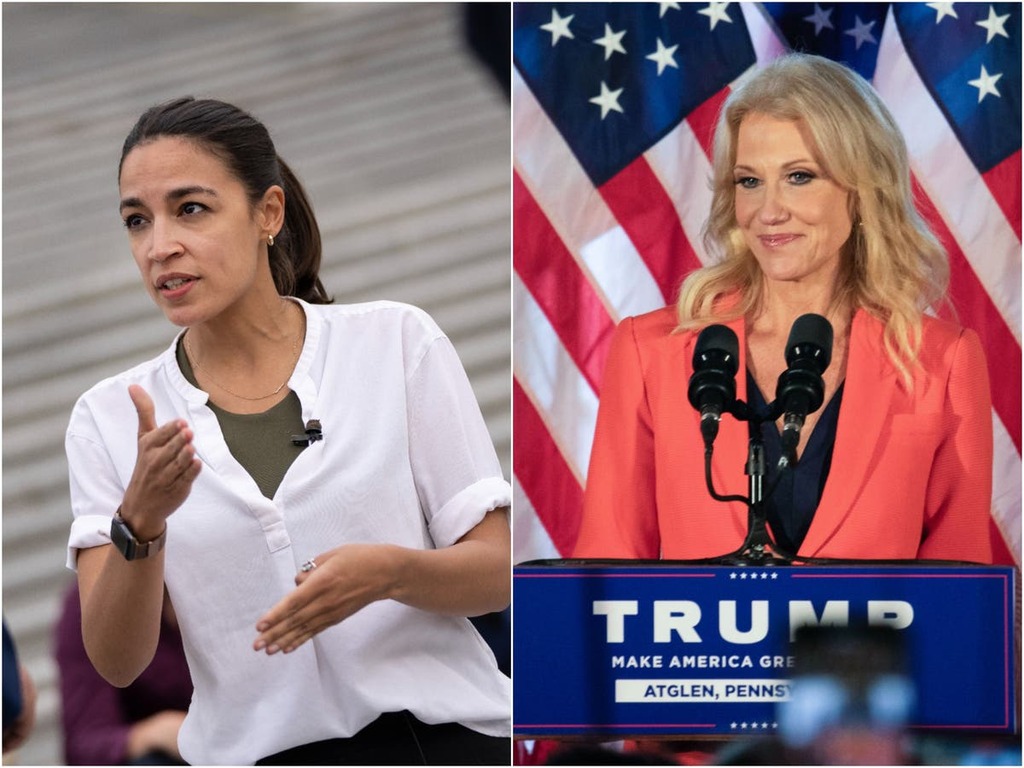 New York Democratic Representative Alexandria Ocasio-Cortez slammed former counsellor to President Donald Trump Kellyanne Conway for refusing to step down from the board of visitors for the US Air Force Academy.

The White House Office of Presidential Personnel sent letters to former members of the Trump administration asking them to resign their posts at advisory and visitor’s boards for the Military Academy, the Naval Academy, and the Air Force Academy.

Those who didn’t resign by 6pm on Wednesday would have their positions terminated.

In response to the request that she stepped down, Ms Conway posted a letter addressed to President Joe Biden, writing that the request seemed “petty and political, if not personal”.

“Your decision is disappointing but understandable given the need to distract from a news cycle that has you mired in multiple self-inflicted crises and plummeting poll numbers, including a rise in new Covid cases, a dismal jobs report, inflation and ... the chaotic and deadly withdrawal from Afghanistan that has left hundreds of Americans and thousands of Afghan allies stranded under Taliban rule,” Ms Conway wrote.

Ms Ocasio-Cortez responded on Wednesday evening in a tweet: “A predictable, if not unfortunate, outcome. Clinging onto vestiges of power against the people’s will is kind of your /Trump’s / the GOP’s thing. When you’re fired, don’t let the fascist victim complex hit you on the way out.”

Mr Spicer spoke about his dismissal on his Newsmax programme on Wednesday, just after his termination had gone into effect.

“All Trump appointees, including myself, have been kicked off the boards of the United States Naval Academy, Air Force Academy, and West Point in an unprecedented move by the Biden administration,” he said.

“I will be joining a lawsuit to fight this,” he added. The former press secretary was previously a member of the Board of Visitors at the United States Naval Academy.

According to Mr Spicer, the letter asking that he step down said: “Please submit your resignation to me by the close of business today. Should we not receive your resignation, your position with the Board will be terminated effective 6pm tonight. Thank you.”

Mr Spicer went on to allege that the move to remove Trump appointees from the boards was maybe prompted by a will “to inject liberal ideology like critical race theory into the curriculum, and they want to ensure there’s no pushback”.

On Wednesday, White House Press Secretary Jen Psaki said: “The president’s objective is what any president’s objective is – to ensure you have nominees and people serving on these boards who are qualified to serve on them and who are aligned with your values … I will let others evaluate whether they think Kellyanne Conway and Sean Spicer and others were qualified or not political to serve on these boards.”