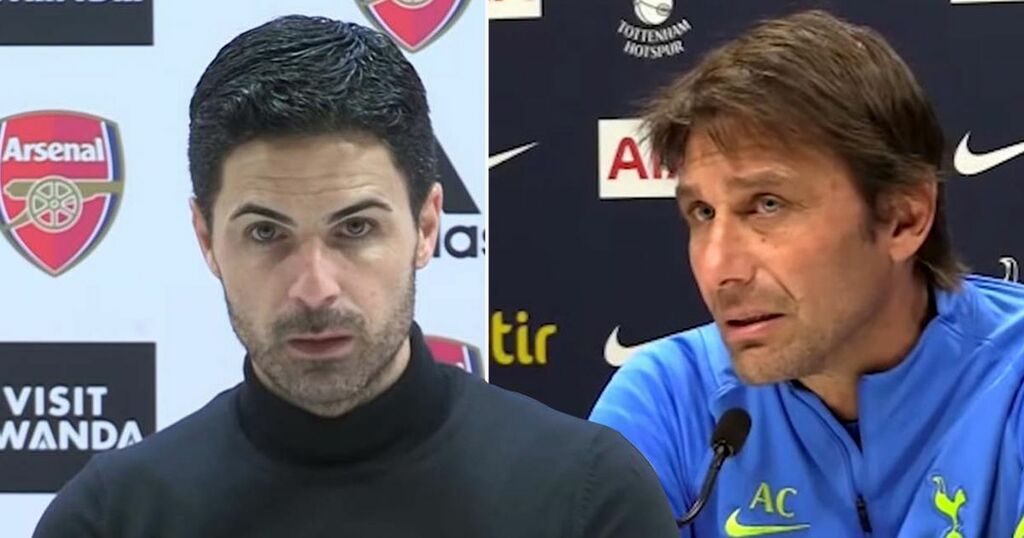 Spurs defeated their local rivals 3-0 on Thursday night to reignite the race for a spot in the top four of the Premier League, with Harry Kane scoring twice and Son Heung-min adding the third. The fixture had its fair share of controversy as the Gunners conceded a somewhat soft penalty before Rob Holding was sent off.

Arteta was especially livid about the spot kick being awarded and was tight-lipped in his post-match press conference to avoid getting "suspended for six months". Conte had no time for the Spaniard's protests, however, and accused his opposite number of "complaining a lot" as he spoke to reporters.

Conte, 52, has a wealth of experience in the dugout having won titles with Juventus, Chelsea and Inter Milan before joining Spurs mid-season. In contrast, Arteta, 40, is in his first senior managerial role and his sole trophy is from the 2019/20 season, when he led the Gunners to FA Cup glory.

There is no doubting Conte is the more decorated and battle-hardened of the two bosses, but he is facing backlash for his comments on Arteta. Jordan was eager to point out the animated Italian also throws plenty of strops and harked back to Spurs' 1-0 defeat by Burnley in February to illustrate his point.

Did Antonio Conte overstep the mark? Have your say in the comments...

"I don't know how he has the audacity to comment on the fact Arteta moans and groans about things, all of them do the same thing," Jordan told talkSPORT , per Metro. "I don't think Mikel Arteta was asking for advice on his coaching from Antonio Conte.

"And maybe Antonio Conte could take some advice about acting like a mature individual when things aren't going his way. He had a temperamental hissy fit two or three months ago, 'I don't think I'm good enough.'

"The bottom line is I don't know why Antonio Conte needs to dispense his particular brand of wisdom to Mikel Arteta. I'm sure it's because it was a leading question, but notwithstanding it, you don't have to answer the question by being slightly condescending and patronising about the nature of the person's experience in the profession."