The Antarctic Peninsula, which is the part of the continent closest to South America, experienced a record heatwave of sorts in early February.

On February 9, a weather research station on Seymour Island reached a temperature of 20.75C, which if verified would be the ice-covered continent's hottest temperature on record.

The warmth during early February comes against the background of sharply increasing temperatures linked to human-caused climate change, with melting glaciers and vulnerable floating ice shelves the subject of increasing concern to scientists and policymakers alike. The Antarctic Peninsula is one of the fastest-warming parts of the globe.


The record warmth on February 6 and February 9, which came during a longer, stretch of much above average temperatures that lasted from February 5 through to February 13, was enabled by a dome of high pressure parked over the southern tip of South America, along with warmer-than-average sea surface temperatures.

In addition, there was an absence of a band of winds known as the Southern Hemisphere Westerlies blowing between the continents, which tend to shield Antarctica from milder air to the north.

The temperature records, at least the one at Esperanza Station, were also aided by downsloping winds, known as foehn winds, which cause air to compress and temperatures to increase. Such winds came down from mountains called the Antarctic Peninsula Cordillera.

"It's not unprecedented to get these foehn events," Ruth Mottram, a climate scientist with the Danish Meteorological Institute, told National Geographic regarding the recent temperature records. "Of course, when you have a warmer atmosphere or ocean nearby, it's easier to break the records when you have them."

That much was clear before new satellite imagery became available. But on February 21, Nasa released data showing the startling impacts of the Antarctic warmth on Eagle Island, located near the tip of the Peninsula.


Mauri Pelto, a glaciologist at Nichols College, told Nasa's Earth Observatory that during the warming event, about 2.3 sq km of snow cover became saturated with meltwater, which shows up on the satellite images as blue-covered melt ponds. According to climate models, Eagle Island experienced peak melt of 2.5cm on February 6.

In all, the island lost 10cm of snow cover in this one warming event, Pelto said. This amounted to about 20 per cent of the seasonal snow accumulation in the region.

"I haven't seen melt ponds develop this quickly in Antarctica," said Pelto. "You see these kinds of melt events in Alaska and Greenland, but not usually in Antarctica." He also used satellite images to detect widespread surface melting nearby on Boydell Glacier.

Pelto said that rapid melting of this sort is usually caused by prolonged periods with temperatures well above freezing, and that has not typically occurred in Antarctica until recent years.


He noted that there were also other significant melt events during this Antarctic warm season, occurring in November and January.

This February heat wave was the third major melt event of the 2019-2020 summer, following warm spells in November 2019 and January 2020. "If you think about this one event in February, it isn't that significant," Pelto said. "It's more significant that these events are coming more frequently."

These short-term heat waves can have long-lasting consequences. The Larsen B Ice Shelf collapsed in a matter of days in 2002 during a warm spell and foehn wind event, speeding the flow of upstream ice into the sea.

This event was the inspiration for the opening scene of the disaster film, The Day After Tomorrow, which was released in 2004. 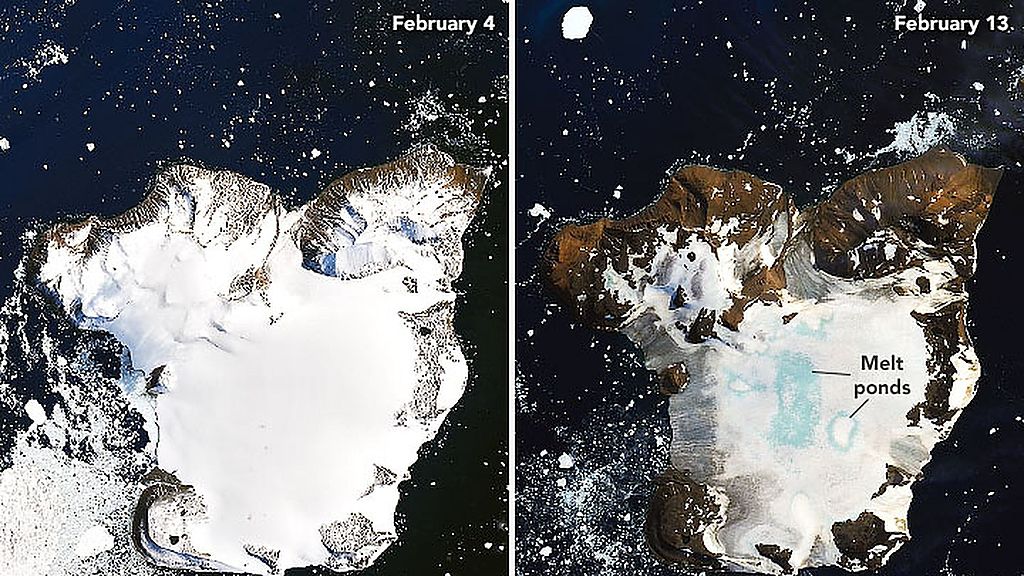 Axios
One subscription that gives you access to news from hundreds of sites
Eagle Island ice shelf in Antarctica melts as record temperatures hit
In just nine days, Eagle Island on the Antarctic Peninsula went from covered in snow to wet and then green…