Ant and Dec have spoken of their surprise at their win at Sunday night's BAFTAs as the ceremony continues to be marred by controversy over It's A Sin being 'snubbed.'

No stranger to awards success, Ant and Dec's Saturday Night takeaway was on the shortlist for the first award of the night at London's Royal Festival Hall, as famous faces flocked to the event for the first time in a number of years, after it was scaled down massively for the coronavirus pandemic. Saturday Night Takeaway saw off competition from the likes of Strictly Come Dancing and An Audience With Adele to win for Best Entertainment.

As well as having a record breaking winning streak for Best Presenter at the National Television Awards, Ant and Dec have had plenty of BAFTAs success over the years too, but seemed genuinely surprised to have won again. During their acceptance speech, Dec said they were 'fully expecting' to be beaten and were just there 'for the party,' before opening up on the difficulties of filming the 2021 series of Takeaway while the country was still in lockdown.

READ MORE: Ant and Dec in Britain's Got Talent 'break up' after audition snub

As they headed home to Newcastle to launch their Making it in the Media scheme on Monday, as well as being announced as hosts of the Princes Trust Awards on ITV, Ant and Dec once again expressed their shock at taking home another BAFTA, with a post on Twitter. Uploading a photo of them and Oscar winner Olivia Colman, who presented them with the trophy, they wrote: "Wow, did last night really happen?! So thrilled @itvtakeaway won the @bafta for Entertainment Programme! Thank you #BAFTATV (and Olivia Colman!) for this wonderful award. Huge thanks to @ITV and our brilliant production team. And thanks @stephenmulhern for his… thanks."

While fans loved seeing Ant and Dec on the winners' rostrum again, this year's BAFTA continue to spark anger over the fact that hit Channel 4 drama It's A Sin got nothing on the night, with its cast also losing out in the acting categories and It's A Sin being beaten by Time for best Mini Series. And, although it won Director and Editing accolades at the Craft BAFTAs at the end of April, fans are up in arms about it not receiving recognition at Sunday's ceremony.

One furious fan tweeted: "It’s shocking #ItsASin won NOTHING at the #BAFTAs tonight. It represented so many wonderful things: found family, love, inclusivity, community, strength, hope, in a truly devastating period of history. It’s a sin indeed." Equally angry, another fumed: "I’m really sad that the #Baftas2022 didn’t award #ItsASin in any of its nominated categories. For me it’s one of the most powerful and important dramas I’ve ever seen it was one of the most powerful, witty, clever and heartbreaking shows I've ever seen. Disgraceful ."

*The Games contestants on ITV including Max George and Olivia Attwood

*The Games' Holy Willoughby shit down over 'ridiculous' remark

*Martin Lewis hit with instant regret on return to GMB 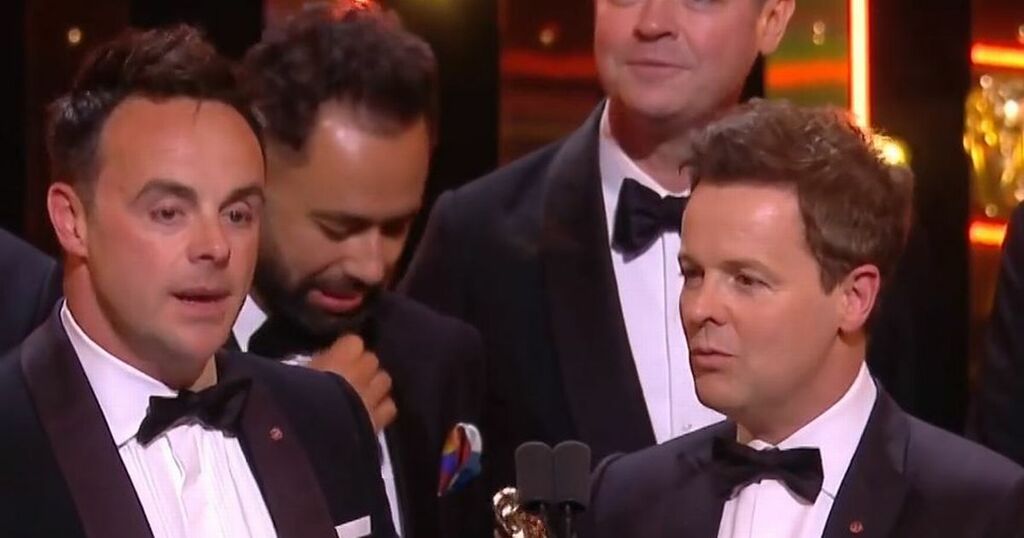 As the Geordie duo won the coveted BAFTA award, Ant McPartlin sweetly shared a kiss with wife Anne-Marie Corbett in…