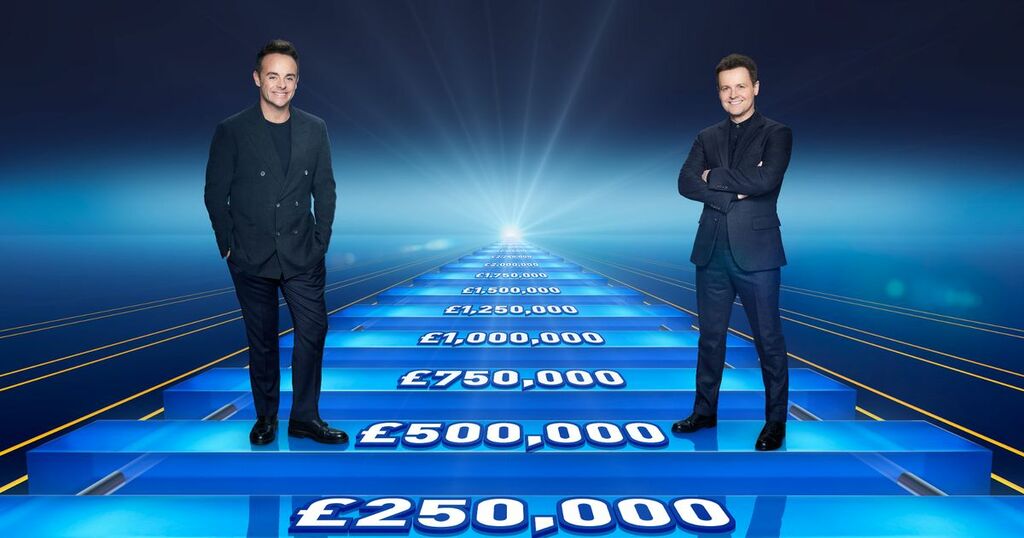 Ant and Dec have told how their new TV quiz breaks the mould of traditional game shows and gives ­contestants more chance of winning bonanza jackpots.

The duo’s Limitless Win on ITV has a never-ending ladder of cash, which means those taking part can win huge sums of money if they do well.

Dec, 46, said: “The great thing about this show is that the questions can’t really get harder because the answer to every question is a number.

“With a lot of TV shows, the further it goes on, the harder it gets. And I find as a viewer, I can’t play along any more because I don’t have any idea.

“But the thing with Limitless Win is that all of the answers are numbers, so you can have a good stab at most of them. You might not get it exactly, but you might stay in the game.”

Revealing how they have torn up the traditional TV quiz rulebook for their show, he added: “As hosts we don’t know the questions, or the answers. So we’re not question masters interrogating contestants.

“So there’s a lot of kind of quiz show traditions that we tried to change when we were developing it and we were going, ‘We want to play along with the contestants.

“‘We want to go on the journey.

“We tried to play with all those quiz show traditions like having a jackpot, like the question masters knowing the questions and all that and we just said, ‘How do we change it? How do we do it differently?’ So it’s kind of unlike anything else.”

Contestants can move up the ladder to win more money once they have “banked” it with a correct answer. They can get some questions wrong but have limited lives.

Ant told how the opening episode gets the winning off to a good start.

The 46-year-old added: “There are big winners yeah. I mean, we give away quite a bit of money.

“There’s one in episode one which is great and a really lovely win. There are some life-changing amounts of money and some crashes and burns from people coming in confidently thinking they will do well and don’t.”

Ant and Dec are synonymous with hit shows and big ­audiences on ITV. But this is their first new project in over a decade. Their last quiz Red Or Black was no big hit.

However, the pair are pleased with the new game show, joking they feared it could make ITV “bankrupt” if players did too well.

Dec said: “We’re really happy with how the show turned out.

“We’re really excited about it. Very proud of it. We think it’s a really fun, exciting dramatic watch.”

Ant added: “It looks really good. We delivered what we set out to deliver.”

The Geordies both revealed what they would do if they won a limitless jackpot. Ant said: “I would like to buy my own island.” Dec added: “Yeah, an island. I don’t think we would be able to afford Newcastle United any more.”