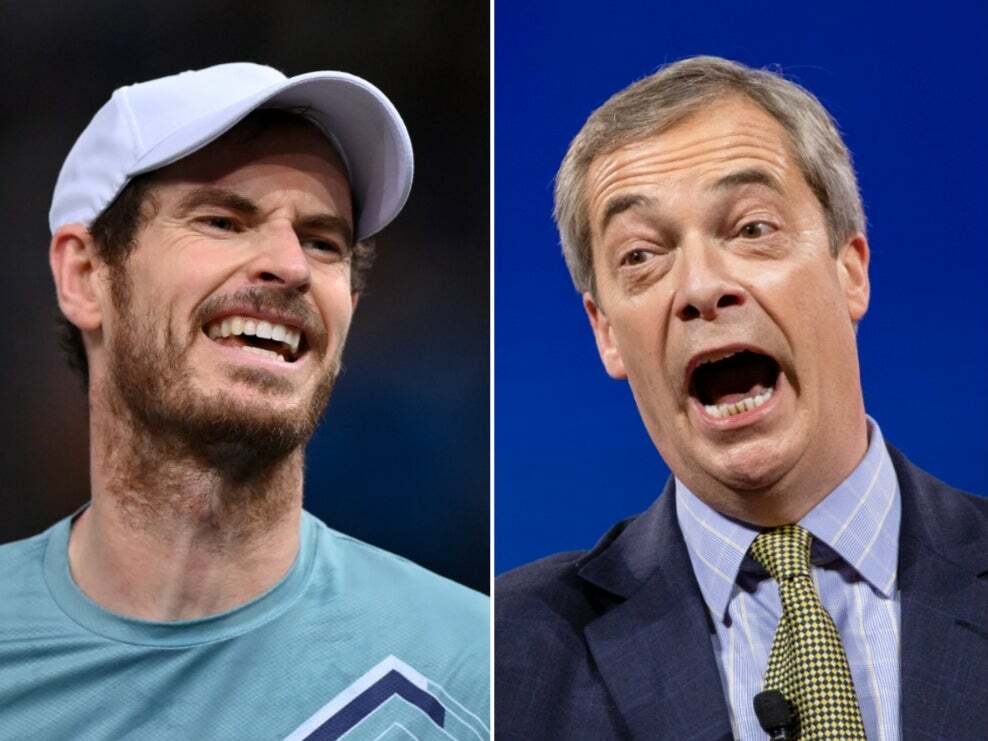 Andy Murray savagely (and hilariously) ripping into Nigel Farage certainly wasn’t on our 2022 bingo card - but ten days into the year, here we are.

Farage was celebrating Novak Djokovic’s recent appeal win over the Australian government’s decision to deny him entry into the country.

Although the world number one confirmed he was not vaccinated against Covid, he has claimed he is exempt from Australia’s strict vaccination policy because he tested positive for Covid in December.

Of course, Farage has been poking his nose in on the matter by supporting the Serbian tennis star while also moaning about Australia’s tight border controls (which is strange considering he’s previously been a staunch advocate for Australian-style border controls be enforced in the UK).

It seems Farage has gotten friendly with the Djokovic family as he posted a clip on Twitter where he was being shown Djokovic’s trophy room with the tennis star’s brother Djordje.

“This is pretty amazing,” Farage can be heard saying before greeting other people in the room.

In the trophy room with Novak's brother Djordje. pic.twitter.com/DjgD4ItdMz

But Andy Murray wasn’t going to let this slide without pointing out the massive irony of it all and in response cheekily wrote:

“Please record the awkward moment when you tell them you’ve spent most of your career campaigning to have people from Eastern Europe deported,” with a winky face emoji.

Please record the awkward moment when you tell them you’ve spent most of your career campaigning to have people from Eastern Europe deported.😉 https://t.co/rfFn1hdXlu

It’s fair to say people on Twitter loved Murray’s grand slam dunking on Farage - and added some tennis puns for good measure to demonstrate this.

Seems Andy Murray serves up aces in more than one arena....👏 https://t.co/Txrod0bazW

I am making a mental record of the delicious moment when I read this tweet. It's like watching one of your glorious backhand straight drive down the line winners.

Thank you for that.

I know it's only the 9th of January but Andy Murray just won 2022https://t.co/njK2ihCW0g

Never mind the @AustralianOpen. This tweet deserves its own trophy.🏆 https://t.co/eQYwvZSQf4

Murray also seemed to get his mother’s approval as Judy Murray retweeted her son’s tweet with a mouth covering emoji.

Safe to say Farage wasn’t very amused at Murray’s zinger. The former Brexit Party leader said the tennis star is “filled with prejudice” and told him to “concentrate on the tennis” and “crack a smile every now and again.”

“Dear Andy, you clearly don’t understand politics or the Brexit campaign but are filled with prejudice. Concentrate on the tennis and, a word of advice, crack a smile every now and again,” with a smiley face emoji.

Dear Andy, you clearly don't understand politics or the Brexit campaign but are filled with prejudice.

Concentrate on the tennis and, a word of advice, crack a smile every now and again. 😃 https://t.co/8s943WUSQ1

That shot failed to clear the net if you ask us - and others agreed too.

The audacity of Farage to accuse someone of being filled with prejudice 😂 https://t.co/9B2S8E5RfB

Mate you just got ratio’ed by Andy Murray, take it in the chin and let it go lmao. https://t.co/X959ugdcFA

Farage just accused someone of been “filled with prejudice” ……….. https://t.co/bQGdGXrOVx pic.twitter.com/N0T5hw7yPs

Though Murray was clearly amused at Farage’s response and replied to it with a fishing pole emoji - alluding to the fact the broadcaster took the bait.

Speaking on Djokovic’s situation, Murray previously said as quoted by Australian newspaper The Age: “I think everyone is shocked by it to be honest.”

“I’m going to say two things on it just now. The first thing is that I hope that Novak is OK. I know him well, and I’ve always had a good relationship with him and I hope that he’s OK.

“It’s really not good for tennis at all, and I don’t think it’s good for anyone involved,” he added.

Murray is set to play Viktor Durasovic tomorrow in the Sydney Tennis Classic after being given a wildcard to play in the event.

The 34-year-old is also a wildcard in the Australian Open which begins on 17 January.

Tom Brady refused to leave field so he could earn his buddy $500,000