Andy Moran column: I'd love nothing more than to see Mayo finish job we started 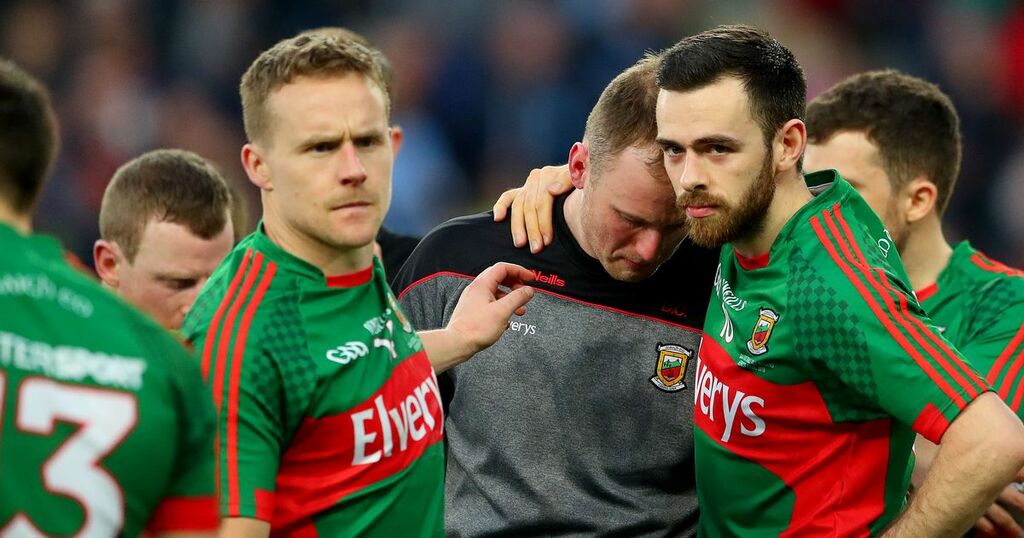 All-Ireland week is not easy for a player and, I have to say, there’s not one part of me that’s missed it over the past few days.

Then you jump on the bus the day before the game and suddenly it becomes real. You’re in the inner circle, where you’ll stay until well after the game, and the anticipation starts to build.

I don’t have any regrets about not being involved. I’m nearly 38, I had six chances at winning an All-Ireland final and didn’t take them so it’s best to move on and give someone else a chance at it.

I’d imagine that all of the Mayo players over the past 40 or 50 years would say the same thing. I think of lads like Gary Ruane, James Nallen and Fergal Costello, who I played alongside in the early part of my career, and I would say that the likes of them would have no sense of regret at missing out if Mayo get the win this evening. It’d be more pride that they made a contribution over the years in helping the county get to that point.


Last year was my first year out and I wasn’t quite 100% comfortable with it but that was more because a lot of great men that I had soldiered with weren’t getting a look in and, compared to how I finished up, I felt the pain for them.

I didn’t particularly enjoy playing for the club last year as I just needed to establish a bit more distance between the full-on nature of inter-county level before I could get a real thrill out of the club again. And sure enough, even though I’m player-manager now, I’m loving it again.

In terms of the various finals Mayo have been in over the years, this one has most in common with the 2012 final against Donegal. Nothing between either side, a genuine 50-50 game. In fact, anyone who categorically states that either side will win today’s game is spoofing. It’s just too tight to call with any degree of certainty.

There’s a different psychology to this final and it’s of benefit to both teams that they’re not playing Dublin or Kerry. Teams that have experience of winning a final will find that the second one comes that bit easier to them.

Both teams carry that bit of naivete into today’s game.

Yet, there’s no game that I ever went into thinking we didn’t have a chance. Even in 2004 and ‘06, when Kerry were clearly better than us, you always felt you could find a way to win. That individual brilliance from the likes of Ciaran McDonald would carry the day.


It was a closer run thing in our more recent finals and I stuck in with Mayo in 2018 and ‘19 in the hope that we could pull it off but, after that, I sat down with my wife Jennifer and she put it to me: are you comfortable with them winning the All-Ireland without you in 2020? I was, and I will be today if it happens.

The time for feeling sorry for yourself is gone. My kids are going to school and learning ‘The Green and Red of Mayo’. I want them getting their picture taken with the Sam Maguire Cup. That’s what it’s about now.

Great Mayo people, right up to this week, have gone to their graves without seeing an All-Ireland victory.

If it finally happens today, I’m looking forward to the glow of satisfaction driving back down the road having handed the baton to a bunch of lads that came and finished the job.

HOW THE TEAMS MATCH UP

BOTH Robbie Hennelly and Niall Morgan have enjoyed standout years.

They are very different goalkeepers, however. Morgan is a natural outfield player who will link the play from back to front. Hennelly will direct traffic behind his defence.

The pair of them have an exceptional kicking range, however, and I’d be surprised if both of them haven’t raised at least one white flag before the game is over.

I don’t expect there to be many goals so either of these two could be a match-winner from placed balls.

MAYO have the better one-to-one defenders for me but this is offset by the system that Tyrone have. They always manage to create a sweeper, usually Frank Burns.

This gives McKernan, McNamee and Hampsey great protection while clogging up the central channel for the opposition.

So, all things considered, it’s much of a muchness between the two back lines and, just as with the goalkeepers, it’s an area of the team where both sides will expect scores from.

Both half-back lines have transition players but it was notable that in their respective semi-finals, both Tyrone and Mayo largely nullified the threat from the opposition half-back lines.

Whatever defensive unit can repeat that level of performance will have sent their team a reasonable distance towards the winners’ enclosure.


MAYO have the stronger hand here.

Mattie Ruane has been their standout player this season. His duel with Brian Fenton underlined his progress and he’s ably assisted by Diarmuid O’Connor and Conor Loftus.

Tyrone’s midfield has a different mix, with two men that are big in stature yet mobile. When Colm Cavanagh retired you wondered what direction Tyrone would take at midfield but Brian Kennedy and Conn Kilpatrick have been very solid.

Tyrone will try to exploit Mayo with long and direct kickouts aimed at these two but it didn’t give them an edge against Kerry and I expect that Mayo will be ready for them.

Ruane and O’Connor will have the upper hand on the ground and the latter’s natural ability as a forward, which will see him slipping further upfield, will cause difficulty for Tyrone’s central pair.

This is where Mayo’s superiority is most pronounced - they need to make it count.


I was impressed at how the Tyrone management kept patience with their forwards in the semi-final.

Darren McCurry was getting destroyed by Tom O’Sullivan with just three possessions in the first half and no shot at the posts.

He had to be looking over his shoulder but Feargal Logan and Brian Dooher showed patience and McCurry ended up kicking two crucial points from play. As a forward, knowing you have the full confidence of your manager is a weight off your shoulders.

The loss of Cillian O’Connor in June looked to be fatal for Mayo. However, with every obstacle comes an opportunity. Ryan O’Donoghue has been spectacular this year and Tommy Conroy came alive when the need was greatest against Dublin.

Aidan O’Shea and Mattie Donnelly may not be stealing the headlines for either side just now but they are key links in their respective attacks and bring a calming influence.

But, all told, I think it’s a dead heat between the two forward divisions.

Logan and Dooher have better options than James Horan when looking over their shoulders.

There’s nothing too shabby about Enda Hession, Darren Coen and James Carr from a Mayo point of view, but Tyrone’s bench has been integral to their progress through the Championship, whether it was Conor McKenna and Tiernan McCann against Donegal or Cathal McShane and Darragh Canavan against Kerry.

Holding players of that calibre in reserve is always a risk but if the game is in the mix in the last quarter, Tyrone have extra riches that Mayo can’t reach for.


BOTH teams are served by astute management teams that will have plotted and planned how to counteract the opposition’s strengths.

Neither side is going to nullify the other, however, so the small gains made across the field will add up to determine the winners.

I believe that the four-week break will have given Mayo enough time to find more of those gains and so I’m backing them to win. Just.

THE Meath ladies footballers have demonstrated what can be achieved with proper planning, belief and some really good coaching.

They certainly aren’t an overnight sensation. They set a template for how they wanted to play over the last five years and after losing two intermediate finals they got up to the senior grade last year.

Evan Talty, the Clare ladies manager, is a good friend of mine and he told me what was happened in Meath and raved about their organisation and it was laid bare for all to see against Dublin.

How they pressed the kickout, the way they erected a defensive wall and their ability to kick scores at vital times was a joy for any aspiring coach to watch.