Anderson, Donaldson Give Their Sides on ‘Jackie [Robinson]’ Comment

The confrontation occurred in the bottom of the fifth inning when Donaldson and Sox catcher Yasmani Grandal shared words at home plate as he stepped up for his third at-bat. The heated back-and-forth prompted players from both teams to surge onto the field, leading to Anderson needing to be restrained by teammates José Abreu and Gavin Sheets.

Anderson and Donaldson also had to be separated following an exchange in the third inning earlier in the contest.

After the game, White Sox manager Tony La Russa alleged Donaldson made a “racist comment” toward Anderson but declined to comment further. Anderson, who was one of the first players to reach the scrum, clarified during his media availability that his intense response stemmed from Donaldson calling him “Jackie,” a reference to Hall of Famer Jackie Robinson.

“He just made a disrespectful comment, you know, basically was trying to call me Jackie Robinson, like, ‘What’s up, Jackie?’ I don’t play like that, I don’t really play at all,” Anderson said, per NBC Sports Chicago. The Sox star claimed Donaldson made the comment twice, with the first instance allegedly coming in the second inning when the former AL MVP eventually scored after grounding into a fielder’s choice to first base.

According to Laura Albanese of Newsday, Donaldson confirmed he greeted Anderson by saying “What’s up, Jackie” in the first inning as an attempt to “diffuse the situation” before claiming he thought it was an inside joke between the two.

Yankees reporter Bryan Hoch later reported Donaldson made the reference based on a 2019 article from Sports Illustrated’s Stephanie Apstein in which the 2013 first-rounder said he feels like the modern-day version of the Dodgers legend.

“I kind of feel like today’s Jackie Robinson,” Anderson told Apstein. “That’s huge to say. But it’s cool, man, because he changed the game, and I feel like I’m getting to a point to where I need to change the game.”

At the time, Anderson, then batting a league-leading .375, was the only Black player on the White Sox roster, “making him one of only 72 Black players in a game that, percentage-wise, was more than twice as Black as recently as 1994.”

Donaldson also claimed he joked with Anderson about comparing himself to Robinson while with the Braves in 2019. “I don’t know what’s changed — and I’ve said it to him in year’s past. Not in any manner than just joking around for the fact that he called himself Jackie Robinson,” he explained. “If something has changed from that, my meaning of that — has not any term trying to be racist by any fact of the matter. It was just off of an interview of what he called himself.”

Saturday’s dust-ups were the latest exchanges in a brewing feud between Donaldson and Anderson. The pair were previously involved in another bench-clearing dust-up on May 13 at Guaranteed Rate Field.

No punches were thrown and no players were ejected in either confrontation. Umpires did, however, issue warnings for both teams.

After taking Saturday’s game, 7–5, the Yankees will host the White Sox for a doubleheader Sunday, the sixth and seventh times the clubs will have faced off in a 10-day span. New York has now won four of their last five meetings against Chicago. 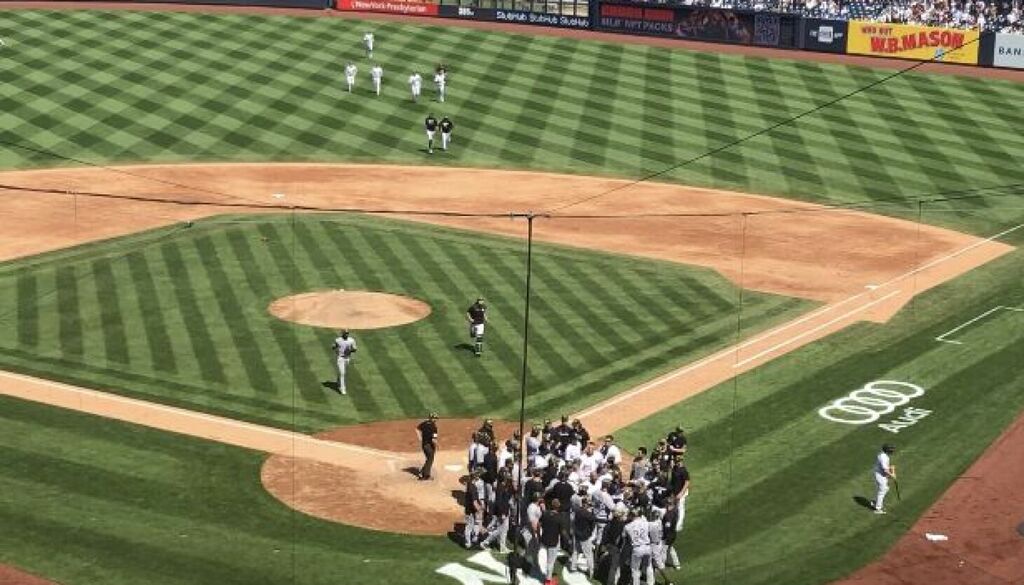 White Sox say Josh Donaldson’s Jackie Robinson comment triggered bench clearing
The Sox’ Yasmani Grandal and Tim Anderson and the Yankees’ Donaldson were at the center of the dustup. There were…

Chicago Sun-Times
One subscription that gives you access to news from hundreds of sites
Yankees’ Josh Donaldson gets suspension, fine for comments to White Sox’ Tim Anderson