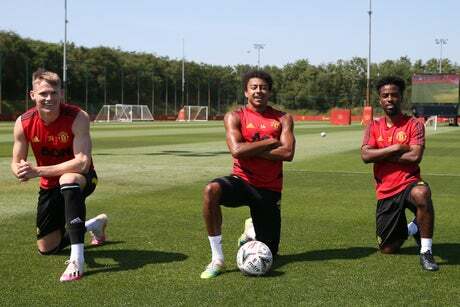 Angel Gomes says it feels amazing being with the England Under-21s having felt miles away from a call-up following his exit from Manchester United.

The former United academy player left Old Trafford last year having been there since the age of five and has opened up on accusations his exit was all about the money.

Gomes declined a contract at Manchester United and joined Lille before shining in a year on loan in Portugal with Boavista.

The attacking midfielder is now establishing himself with the French champions and has been granted his first call up to the Under-21s after new manager Lee Carsley contacted Gomes in the days following his appointment.

"It was surreal really because in my eyes I thought I was pretty far away from the 21s even though I had a good season in Portugal," said Gomes, who helped England win the Under-17 World Cup in 2017.

"The manager rang me saying he had watched some of the games in Portugal and had been keeping his eye on me, so to get that [phone call] was nice.

"To be back is amazing and to have the opportunity is something I have been working on in the last couple of years. I’m delighted to be back

"The call gave me the motivation to keep doing what I’m doing and try and do more with each opportunity you get."

Gomes is certainly taking his opportunities since leaving United. It was widely expected that the now 21-year-old would be another breakthrough star from the academy in the red half of Manchester, having in 2017 become the club’s youngest senior debutant since the great Duncan Edwards in 1953.

But it never came to be and Gomes declined a new deal in 2020, taking the bold step to move overseas.

"There was a contract there that was on the table for me to sign," said Gomes.

"Everyone refers to ‘I left for more money’ which, for me, makes no sense why anyone would leave Man United, the biggest club in the world, with a lot of money, to go to the French league to play for Lille.

"That obviously made no sense and, for me, it was more to do with the pathway and the opportunity that Lille were bringing. At the time I’d spoken to a lot of people at the club and a lot of people from Lille.

"It was just a  decision I chose to make and nothing to do with personal issues at the club or anything. I didn’t leave on anything negative and I have nothing negative towards the club because without them I wouldn’t be where I am today, so that was literally how things went.

"It was a big step and I knew it was going to be a big step. It is not one I regret because it is for my development and I know a lot of good can come from it."

Gomes is part of an England squad that is facing games away to Slovenia on Thursday and Andorra the following Monday as part of their qualifying campaign for the Under-21 Euros being held in 2023.