When the Liberals looked in mortal danger of losing the blue-ribbon seat of Wentworth, who would expect a large mob of CEOs, bankers and barristers (among others) to gather jubilantly in the eastern suburbs and cheer every time the ABC reported a swing against the Coalition?

Peter Dutton might lose his seat? People were stomping their feet and doing a little jig. Trent Zimmerman poised to lose his seat in North Sydney? A huge roar went up. Josh Frydenberg looking shaky in Victoria? This sea of teal was gripped with delight.

Such was the toxic stench of the Liberal brand, that the former party faithful (or more likely children of the party faithful) gathered for Allegra Spender at her celebration in Bondi and practically danced on the political grave of Scott Morrison.

Bondi Bowling Club was a wave of teal. Although not claiming victory on Saturday night, Spender claimed a victory of sorts, and that was a victory in shepherding a new, less cynical way of doing politics.

“It is a victory for the community and what we have achieved together – there is still prepolling and polling to be counted, and while it’s looking good, not everything has been counted,” she said.

“But it’s a victory for the community movement around the country. We stand for the future, not for the past. You’ve given up shouting at the television, the negativity and the spin. You’ve all invested in the democracy of the country.”

The biggest cheer came from Spender’s rallying call to include more women in politics.

More than 700 people RSVPed to the event, which from the get-go had the festive and carefree air of a result that had already been decided.

Large cheers went up for anything on the big screens that challenged the Liberal hegemony.

“It’s beyond all expectations,” said a Spender supporter, Adele Gibson, of Bellevue Hill. “Scomo’s gone now. And the Murdoch press? They don’t control us any more – gone!”

Introducing Spender was Lyndell Droga, the Wentworth independent’s campaign spokeswoman. Married to short-seller Daniel Droga, she approached Spender a year ago with a plan to run as an independent.

According to a strategist close to the campaign, the Spender base were people who would never vote Green or Labor, but no longer recognised the party of their parents. This base was motivated enough about the climate and had enough trust in the candidate to join a movement.

Heavily represented at the Spender party were members of Business Women Australia – and many volunteers were well connected and well resourced in corporate Australia, according to a Spender strategist.

A man shouted to his friends from the crowd, “I know you just got married but this is the best night of your life!”

Droga made a fulsome acknowledgement of country and thanked the lineage of independent women who had come before Spender, including Cathy McGowan, Zali Steggall and former Wentworth independent MP Kerryn Phelps.

She also acknowledged the bravery of the supporters – people in the richest electorate in Australia who “never would have talked about politics with their friends or family” but were transformed by disgust for mainstream politics and a need to take action on integrity and the environment.

The capitalist class of Sydney’s east have proven a formidable force in turning Wentworth teal. The vibe in the room was ecstatic – to put it mildly. It’s like every single supporter had just been elected school captain, chief executive and had their company floated on the stock exchange all at once.

For those in the eastern suburbs, the image of Allegra Spender had become as familiar to them as their own face in the mirror. Her posters were everywhere – crowding out her political competitors’ advertising at an embarrassing ratio (what does Labor’s Tim Murray even look like?). The teal-coloured posters with a smiling headshot were on the fence posts of terrace houses all the way down the gully towards Cooper Park; they sat on the glass veranda balconies of mansions in Vaucluse; they stared back at you as you had coffee in the park by the yacht club; they were on the cars and trucks that drove slowly through Cross Street in Double Bay; they eyeballed you from the windows of the Rose Bay shops.

At the dog park in Darling Point, Spender’s volunteers would swoop on your animal, pat it, then offer you an Allegra Spender dogkerchief. Over the last six weeks, even the local pets were recruited into walking billboards.

A spokesman for the Spender campaign said the campaign had more than 1,200 volunteers and an inventory of over 800 posters. As for the dogkerchiefs, “We had to reprint them three times – there are literally hundreds of dogs around Wentworth wearing Allegra scarves.”

Like Where’s Wally?, spotting the Liberals’ Dave Sharma had been difficult. You had to really look, and there he’d be, his poster like a postage stamp in an endless sea of teal.

Spender, who campaigned on a platform of environmental action and integrity in politics, is very much a product of the eastern suburbs. She attended school at Ascham in Edgecliff where she was head girl, and is the daughter of the late fashion designer Carla Zampatti and John Spender, a Liberal minister. Her grandfather Sir Percy Spender served in the Menzies government.

Now Spender is poised to commit a sort of patricide – killing the party of her family. But as her supporters were saying all night, the party is no longer recognisable to the Liberal party of Malcolm Fraser or Robert Menzies. You can’t kill something that died a long time ago. 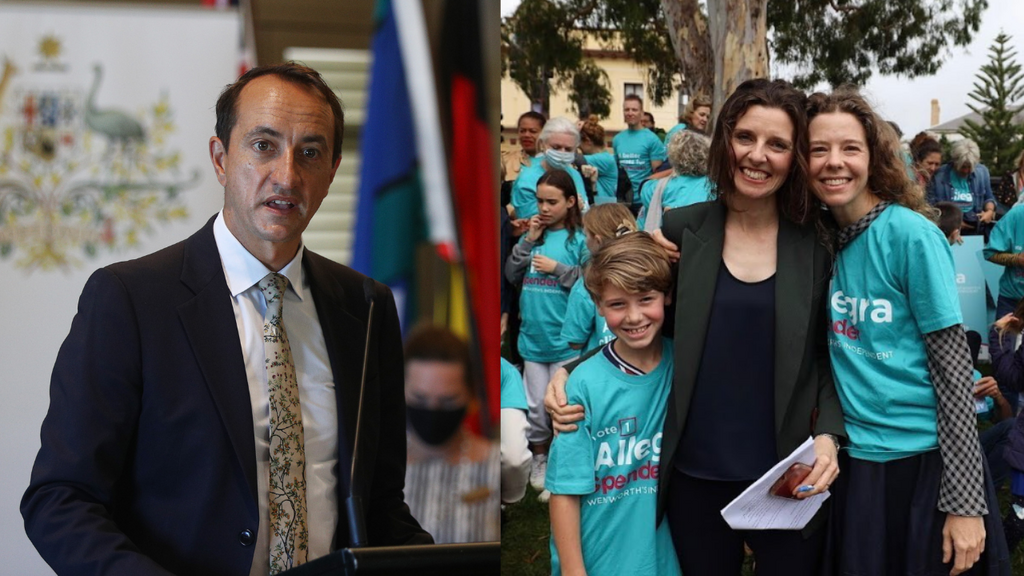 Pedestrian.tv
One subscription that gives you access to news from hundreds of sites
The teal wave: Meet the pro-climate women who took on the Liberal Party and won

A wave of independent, teal candidates running on climate action and transparency rocked the election – causing major upsets for…