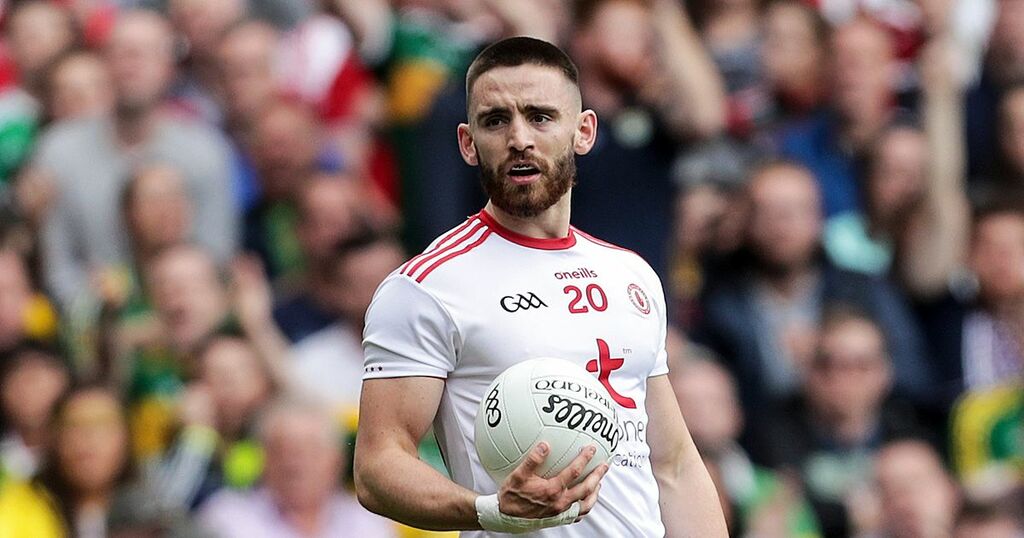 Sitting at 33/1 in the Footballer of the Year odds is Tyrone skipper, Padraig Hampsey.

There are 15 players ahead of him, six from Tyrone.

Some money has clearly gone on elsewhere and he’s now 13th on another list at 22/1, with five of his team mates ahead of him.

The bookies don’t often get it wrong – apart from the two recent football All-Ireland semi-finals.

But with inter-county players selecting the winner, off a shortlist compiled by selectors, it can be a precarious business selecting a Footballer of the Year.

It is often swayed by television man of the match awards, and the commentary of high profile analysts.

Maybe there could be another upset on here when it comes to the Footballer of the Year – if Tyrone win on Saturday evening.

Tyrone captain Hampsey has form in All-Ireland finals as well.

When Tyrone were well beaten by Dublin in the 2018 Sam Magurie decider, he was comfortably their best player, forcing a string of turnovers on Paul Mannion and Kevin McManamon.

He also supplied the final pass for a penalty goal and scored a point, while showing his cutting edge with a thumping shoulder on Jonny Cooper late on.

The Coalisland Na Fianna man went on to win an All Star that year.

Ask Tyone people and Hampsey is comfortably in their top three from the county. Many have him as their top performer this year.

Maybe it’s because Hampsey isn’t much of a talker, by his own admission. Or that he’s a defender.

Or that Kieran McGeary has snaffled two television man of the match awards for his all action displays in the huge wins over Donegal and Kerry.

It tells you something that McGearty is the Tyrone vice-captain, to Hampsey the captain.

It’s worth noting that Hampsey has scored a point in each of the last two games.

And also that he’s done big man marking jobs on Conor McManus and Paul Geaney, with the latter taken off before being brought back on for the injured David Clifford.

Ryan O’Donoghue or Tommy Conroy could be up next. It could even be Aidan O’Shea if he is switching in and out and Tyrone want to keep Ronan McNamee close to goals.

Hampsey will hardly care. He is a man of action, rather than words.

Maybe it’s Hampsey’s boxing background, which tells him it’s about leading by example in how he trains and plays.

He says he has no speech ready if Tyrone win a fourth All-Ireland title in their seventh final: “I try and speak a bit but I wouldn’t be great,” he says.

“Look, I won’t even worry about that. I’ll worry about going out to do my best for the county and all the lads will be the same. It will take a massive effort against a great Mayo side.

“I just try and keep the head down and work hard on the training pitch.

“There are plenty of leaders in the panel – even the likes of Kieran (McGeary), who is vice-captain, and he plays a massive role and is a great leader himself.

“There are many in the panel who lead by example and it makes my experience a lot easier. It takes a weight off my shoulders. I’m very thankful to those lads for sharing the whole thing.”

Hampsey recalls the moment when he was handed the captaincy by Brian Dooher – a renowned man of action himself – and his fellow joint-manager, Feargal Logan.

“I remember they pulled me to the side and they explained they were putting me in a new role,” he says. “It was a very proud moment for myself.

“To be taking the role from the likes of Mattie Donnelly, who I’ve learned a lot off as a captain and is still a great leader to this day.

“I’ve learned an awful lot from him as a player as well. It was massive for myself and I’m very thankful to Brian and Feargal for it.”

Asked about double All-Ireland winning skipper, Dooher, Hampsey said: “Brian has been there and done that.

“He has led by example as a footballer and he’s doing the same as a manager. A no bullshit attitude and he can sense things.

“He just knows when things aren’t right. He’d pull you to the side. He’s keeping lads grounded.

“You’re just working hard and putting your head down and he’s keeping you focused. That’s the way he wants it and I suppose that’s the best way to have it.

“Look it, we’re thankful for Brian and Feargal, who’s a great man and has done plenty for us lads this year.”

Dooher and Logan had their work cut out coming off the back of the six goal defeat by Kerry in the League semi-final at Killarney back in June.

“I suppose coming home that day was a turning point for us,” said Hampsey.

“We went back to training on the Tuesday.

“We had a real hard look at ourselves as players. Did we really go out and do the county proud that day, which we didn’t.

“We had a couple of tough sessions and lads just put their shoulders to the wheel and believed if we got things right and stuck together that we had the players and the squad to go places and thankfully we’ve done that.”

OUR ALL-STAR SIDE GOING INTO THE FINAL: