Aim is to make Tamil Nadu number one in industrialisation, says CM Stalin 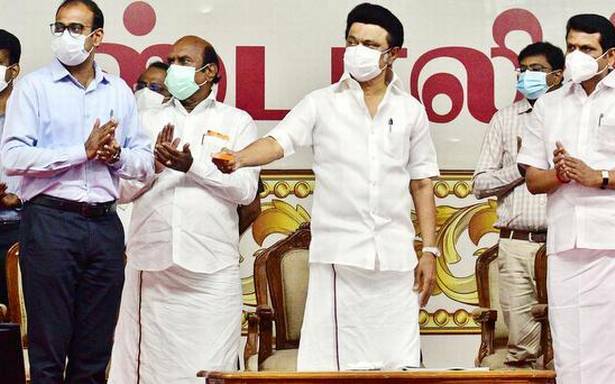 The Tamil Nadu government’s objective is to make the State number one in industrialisation, Chief Minister M.K. Stalin said in Coimbatore on Monday.

The CM was in the city to inaugurate completed government schemes, launch new ones and distribute financial assistance to beneficiaries.

On Tuesday, Mr. Stalin will meet industrialists at an investors’ meet, to sign MoUs and draw in investments. The move will create employment opportunities and pave the way for further industrialisation of Coimbatore.

The district is known for its industrial houses as well as medium and small enterprises. The government’s objective was to industrialise other districts in the State, Mr. Stalin said.

The Chief Minister said his government believed in action more than words. It would like its performance to speak for itself. Therefore, the State government would follow up on announcements made by issuing orders and then executing them.

Mr. Stalin said though this was a government function and he would refrain from talking politics, he would like to say that in the run up to the 2021 Assembly election, his opponents had criticised his move to collect petitions from the public saying the petitions dropped in the boxes he had kept would never be opened. But on assuming office, he established a new Department to act on those petitions. In the last six months, the Ungal Thoguthiyil Mudalamaichar Department had resolved issues raised in several petitions, the Chief Minister said. This was a commitment that he had successfully kept.

The other commitment that he made on the day the DMK returned to power was to work for even those people that didn’t vote for the party. In keeping with that commitment Mr. Stalin said he was in the city to launch a host of projects and inaugurate completed ones. It didn’t matter to him that Coimbatore didn’t vote for DMK the way he had expected it to. He would continue to work for the district’s development and he was giving this assurance in front of the audience, he said.

The Chief Minister announced the developments of five scheme roads in the city, funds for UGD coverage for three areas in the city, improving solid waste management and a plan for developing Semmozhi Poonga and auditoriums after shifting out the prison from Gandhipuram.