Hundreds of desperate Ukrainians are still searching for missing relatives

The video was a terrible way for Vadim Yevdokimenko to find out that his father had been murdered. Alexei had been missing for weeks, since he went out in early March to scavenge firewood for cooking in their shattered, Russian-occupied town of Bucha.

Yevdokimenko and his mother, Lilia, clung to a fading hope that he might have been captured and taken across the border, and that he would return in a prisoner exchange – the fate of some Ukrainian men.

But this week the 20-year-old student barber spotted his father’s face in footage of Ukrainians tortured and murdered during the occupation. The only solace the family can reach for now is giving Alexei a decent burial, but they cannot find his body.

So they had come to wait outside a white tent set up in the grounds of Bucha hospital, where French forensic investigators were swabbing a queue of quietly desperate people for their DNA, to see if any of them have relatives lying in the nearby morgue.

After weeks of exhumations, the morgue holds more than 200 bodies that have not been identified. Some were buried without documents and are waiting to be claimed, but many are too disfigured by their deaths, or their treatment after death, to be identified by sight.

“This is the first time we have done this. At first we didn’t know how many people would come,” said Andrei Turbar, the deputy prosecutor for Bucha district, as dozens of relatives filled in forms and waited for their tests. The crowd underlined how many people are missing in just one small suburban town outside Kyiv.

Ukrainians who saw their loved ones killed or have collected their bodies for burial are grappling with terrible grief. But thousands more are dealing with a loss compounded by the agony of uncertainty.

Some are searching for children or parents, a spouse or siblings who went missing when the Russians were slaughtering civilians. Others got bad news from a friend or an image online, but have not been able to find the remains of the person they loved.

So everyone lining up outside the tent in Bucha has come with the bleakest of hopes – to continue in limbo, confirm a death, or find a body they will be able to bury but not recognise.

The UN’s top human rights envoy, Michelle Bachelet, highlighted the torment of those with missing relatives “desperate to know where they are, if they are alive, and how they can get them back”, in a speech to the security council on Thursday.

Vera Kunayeva and Olga Zaetz are friends whose sons were neighbours and went missing together in early March. The two women are praying their DNA will not match any of the bodies, so they can carry on believing the missing men may be prisoners somewhere in Russia, as Yevdokimenko and his mother did until a couple of days earlier.

“We came to do the DNA tests but we hope it is useless, and shows they are alive,” said Kunayeva, whose 40-year-old son, Vadim, is her only child, a family man with two teenagers. Zaetz’s missing son Maxim is a factory worker and at 33 still her baby, the youngest of three brothers.

The men went out at 5pm, neighbours said, and were never seen again. “They started volunteering the first day when the Russians arrived, taking aid to older and vulnerable people,” Zaetz said. “I wasn’t worried because they were always doing it, they were used to helping.”

The area was isolated by Russian troops, half-destroyed by shelling and then occupied, so residents who were hungry and reduced to cooking on open fires had to rely on each other for aid. Kunayeva’s eyes filled with tears as she described what the village had been through, and remembered Vadim. “We want this over, we want victory and the Russians destroyed.”

The number of unidentified bodies in this small suburban town goes up and down daily, said Turbar.

Even as some victims are identified by tattoos, scars or other marks, Bucha’s sandy soil is still giving up more grim evidence of Russian brutality. “In the beginning it was 40 or 50 people exhumed a day. It is going down now. Yesterday we had seven, today four,” Turbar said.

Volunteers are helping retrieve bodies from shallow graves, because authorities cannot keep up. Many are only discovered when residents who fled return. “People are coming back to find a grave in their garden,” Turbar said.

“Perhaps a person driving in a car was stopped by Russians at a checkpoint and they shot him there. Later they let local people bury the body in a nearby house. That wasn’t a single incident, it was systematic.”

Some of the bodies that cannot be identified were burned, some partly destroyed by the force of explosions that killed them. Russian soldiers intentionally disfigured the faces of some victims.

Other corpses were left in cars or on the street so long that decomposition rendered them unrecognisable, after locals were banned from burying them or too afraid to attempt it as fighting raged.

The overwhelming scale of atrocities has led to cruel confusion and bureaucratic layering of pain on top of terrible grief. At the morgue where Yevdokimenko went after seeing the video, he was presented with a single severed leg that workers insisted was all that remained of his father for burial.

“They were trying to push a body on me. [Dad’s] cards were in the pocket but I think someone must have taken them,” he said. The trousers and shoe did not belong to his father, he said.

When he challenged the workers they admitted that chaos often engulfed their efforts and confided that one body bag they opened this week contained three legs.

A small town police force, government and hospital used to dealing with alcoholics, petty thieves and a few dozen deaths a year before Russia’s invasion could hardly have been adequately prepared to handle one of the biggest war crimes investigations of the century.

“I am still afraid to walk around because I remember there was a Russian tank here or here. At the very end when they knew that they were leaving, they went street to street just killing everyone, grannies, grandpas, someone who was just sitting outside smoking,” Yevdokimenko said, adding that most of the victims were men.

“My classmate, who was 20, was shot because the Russians didn’t like his trousers. There are only women left in my circle [so many of the men were killed].”

Despite the scale of the challenge, Turbar says the town is determined to seek justice for the dead, and warn Russian forces still fighting in Ukraine – and reportedly committing fresh atrocities – that they cannot brutalise and murder with impunity.

“Emotionally it is very hard to look at these people, some of them I knew before, all the buildings that have been destroyed,” he said. “But I feel an extreme responsibility to the people of Ukraine to collect evidence so we can take [the Russians] to court.

“What is happening here is nothing compared to Kharkiv and Mariupol, [the number of atrocities uncovered] are going to get even worse. For Bucha, it is over, but there it is still going on, civilians are still dying.” 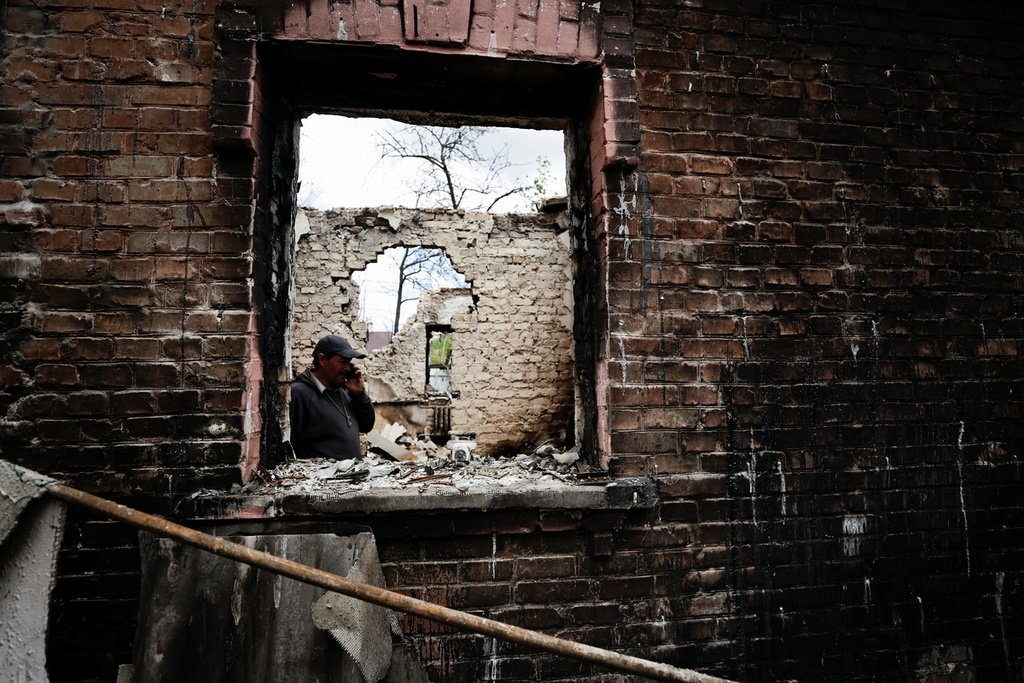 Reuters
One subscription that gives you access to news from hundreds of sites
Ukraine latest: Volodymyr Zelenskyy invites German Chancellor to Kyiv amid Victory Day warnings

As the holiday commemorating the Soviet Union's World War II victory over Nazi Germany approaches, cities across Ukraine are preparing…

ABC News
All women and children evacuated from Azovstal; Ukraine claims it has destroyed another Russian ship – as it happened