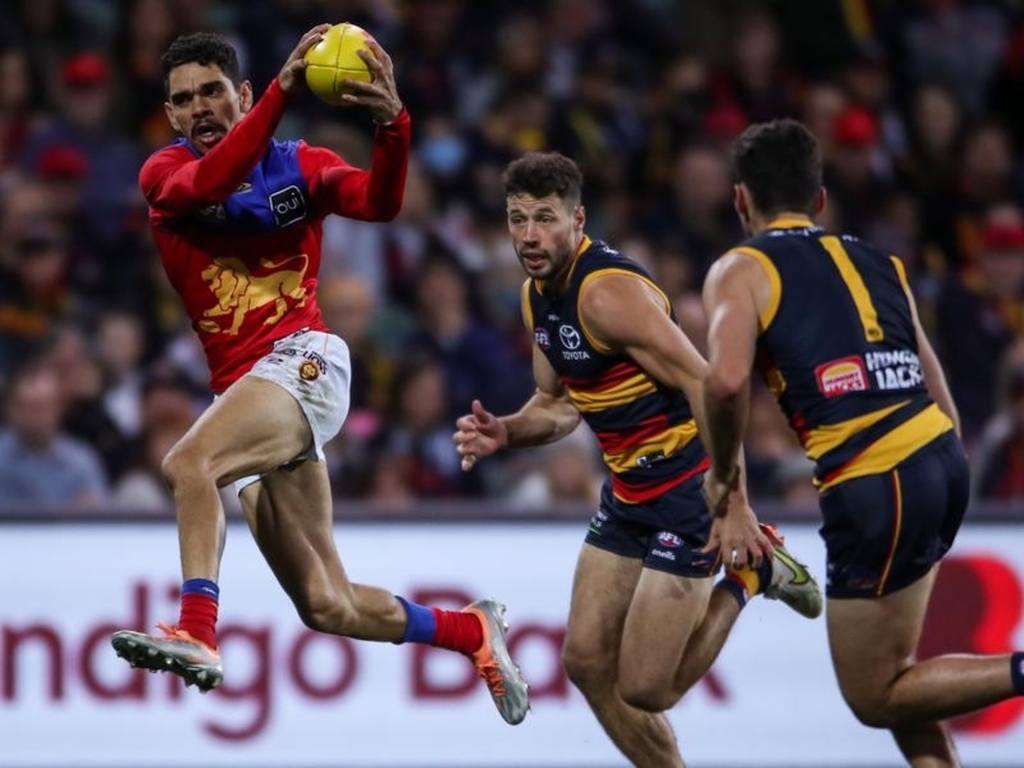 Cameron stars as Lions down Crows in AFL
Brisbane's Charlie Cameron has kicked four goals in a 36-point AFL victory against Adelaide.

The Giants come out cold in Leon Cameron's farewell game, but the Saints are sizzling in an impressive win over…

ABC News
Richmond hang on for AFL win over Hawks

Autosport
From analysis to good news, read the world’s best news in one place
Five interesting Spanish GP F1 updates you may have missed

Sydney have bounced back from consecutive losses on their home deck to thump Essendon by 58 points at the SCG.

Superstar forward Lance Franklin again haunted the Bombers and was instrumental when the match was on the line to help set up the 14.21 (105) to 6.11 (47) victory on Saturday night.

Franklin ended the match with 2.4 but had as much impact with his all-round display and passed off several shots on goal when well within his range.

He has now tormented the Bombers with 77 goals, the most he has kicked against any AFL club.

It was a disappointing performance from the Bombers who were unable to toast captain Dyson Heppell's 200th match with a competitive effort.

Heppell finished with 23 disposals but didn't have enough teammates in support.

The Bombers were on the back foot from early in the contest but were hammered 54-30 for tackles while being beaten 137-124 in contested possessions.

Sydney co-captain Callum Mills (29 disposals, 13 tackles) helped set the tone and was well supported by Chad Warner (32 disposals) and Errol Gulden (26), while Tom Papley (21 touches, 2 goals) looked back to his best after a delayed start to the season.

The Bombers have now slumped to a 2-7 record and have much to do to return to finals for the second consecutive year after recovering from a 2-6 start last season.

While there were few highlights on the night for the Bombers, their in-form spearhead Peter Wright looked to inspire his team with a 65m bomb from a set shot late in the second term.

Darcy Parish (31 disposals) battled hard in the midfield and Andrew McGrath was busy across half-back (22) while Jordan Ridley (22) fought back in the second half to reduce Franklin's influence.

The Swans were looking for a fast start after leading at the first change only twice in the opening eight rounds, and a noticeable lift in intensity helped them win the tackle (12-5) and clearance (11-4) counts while taking a 20-point margin into quarter-time.

The strong opening was capped off by a rousing goal to Sam Wicks after the small forward got out the back of the Bombers' defence, almost stumbled with ball in hand until steadying just enough to slam it through on the run as the siren sounded.

The previous five matches between the teams were decided by an average of six points but the Swans all but ensured this would be a more comfortable margin with four goals to two in the second term as the Bombers were ultimately flattered by the final score.

After three consecutive matches at the SCG the Swans will hit the road to face Carlton on Friday night, while Essendon will look to get their season back on track against Richmond the following night.

Lions see off spirited Crows to keep touch with the leaders

Brisbane livewire Charlie Cameron has torched his former AFL club Adelaide with four goals in a 36-point away victory for the Lions.

But Adelaide remain in the mire in 14th spot with three wins after being flattened by a powerful Brisbane surge.

The Lions slipped 15 points down when McAdam slotted his third goal in the 23rd minute of the second stanza.

But Brisbane emphatically responded to the challenge, kicking the next eight goals of the game and 11 of the next dozen.

After Adelaide's Taylor Walker scored the game's first major, the Lions went on a run of four consecutive goals including two from ex-Crow Cameron.

Brisbane held a 5.2 to 3.3 quarter-time lead before the tide turned Adelaide's way in the second term.

The Crows kicked four unanswered goals, with two each to McHenry and McAdam, to take a 15 point lead.

McHenry's first came amid controversy as he snapped a goal after picking up a ball which had clearly gone out of bounds within metres of the boundary umpire, who inexplicably failed to whistle.

The Crows led by three points at half-time, 7.6 to 7.3, but were overwhelmed by a Brisbane blitz in the third quarter.

In a barnstorming 25 minutes, Brisbane booted six goals to none with Cameron, who left the Crows after the 2017 season, adding two more and missing another set shot.

Brisbane's burst created a 28-point buffer at three quarter-time and the Lions then cruised to victory in a tame last term by adding three goals goals to one against the flagging Crows, who mustered just two majors in the entire second half.

But it came at a cost as small forward Jack Higgins was substituted out under concussion protocols for the second time this season.

Geelong held the upper hand in an arm wrestle until midway through the third quarter, when St Kilda suddenly flicked a switch.

Ruck pair Ryder and Rowan Marshall both set up goals with their tap work as the Saints slammed on five majors in a 10-minute burst to seize momentum.

A seventh goal for the term, kicked by Tim Membrey on the three-quarter time siren, gave them a 16-point advantage after they had trailed by 22 points soon after the main break.

A ferocious spray by coach Chris Scott at the final change spurred Geelong into action and they got back within three points through two quick goals from Tom Hawkins.

But Ryder, who had been the game's most influential ruckman to that point, pushed forward and responded with two goals of his own to steady the ship.

Ryder finished with three majors and had a hand in several others in a match-winning display.

Jade Gresham (30 disposals), Jack Sinclair (31) and Brad Crouch (36) were all outstanding for the Saints as Membrey and Max King kicked two goals apiece.

But the Saints had too many winners when it mattered most.

Higgins was substituted out of the match before half-time following a bump from Jake Kolodjashnij that could land the Cats defender in hot water.

Kolodjashnij also performed the tackle that led to Saints skipper Jack Steel's shoulder injury, which was assessed at half-time.

Steele was moved forward after the main break and saw out the match.

Tigers beat Hawks to continue charge up the ladder

Richmond have survived a late scare to beat Hawthorn by 23 points in their AFL clash at the MCG.

As the Hawks pressed, Jason Castagna smothered a Denver Grainger-Barras kick out of defence and then goaled to kill off the challenge.

Tigers star Shai Bolton then followed up with an outstanding running goal.

The Hawks could have put Richmond under even more pressure late in the game, but James Worpel sprayed his shot at goal.

Bolton's second term was critical for the Tigers and he finished with two goals, while co-captain Toby Nankervis dominated the ruck and Dion Prestia made a successful return from injury.

Hawthorn troubled Richmond early and led by seven points at the first break, but suffered a major blow on the quarter-time siren when Jack Gunston was hurt in a marking contest.

Gunston tried to return early in the second term, but only lasted a couple of minutes before he limped off and was subbed out of the match.

Despite losing one of their most experienced players, the Hawks kicked the first three goals of the second quarter to lead by 25 points.

Then the Tigers scored two goals against the run of play, first a soccer-style strike from Jack Graham and then a stunning snap from captain Toby Nankervis.

Suddenly, Hawthorn's momentum was gone and with Bolton roaring into top gear, the Tigers took control.

Richmond kicked six goals to four and had a six-point lead at the main break, extending that to 19 points at the last change.

Dustin Martin snapped a freak goal in the third, while at the other end Hawthorn's Sam Butler was denied a goal on debut by fellow first-gamer Bigoa Nyuon.

The Richmond backman created enough doubt with his desperate lunge on the goal line for the score to be confirmed a touched behind on video review.

Tom Lynch kicked four goals for Richmond, but defender James Sicily was solid on him and was the Hawks' best player.

The Tigers lost Noah Balta in the third quarter with a hamstring injury.

In-form Port Adelaide have inflicted more pain on an under-fire North Melbourne with a 69-point AFL win in Hobart.

Despite missing skipper Tom Jonas in defence due to health and safety protocols, the Power pocketed their fourth straight victory on the back of a six-goal-to-one first quarter.

The Kangaroos have slumped to their seventh loss in a row after a week in which they made headlines for the wrong reasons.

It was revealed coach David Noble issued an apology to his players for delivering a stern post-match address after their heavy 108-point loss to Brisbane in round three.

It didn't get much better early on, as Port Adelaide dominated contested possession to race to a 41-6 lead at quarter-time.

North Melbourne won the second quarter 16-15 and could have been in a better position on the scoreboard if not for simple misses by Jaidyn Stephenson and Tarryn Thomas in front of goal.

Cameron Zurhaar (three goals) was a bright spark for the Kangaroos, with three majors for the match, including a brace in a tightly fought third quarter in which both sides kicked two goals.

Port Adelaide, who are on the rise after a horror 0-5 start to the season, pulled away with a run of five goals early in the final term.

They play Geelong on the road next round, while North Melbourne face a massive challenge against undefeated reigning premiers Melbourne.

Cameron stars as Lions down Crows in AFL
Brisbane's Charlie Cameron has kicked four goals in a 36-point AFL victory against Adelaide.

The Giants come out cold in Leon Cameron's farewell game, but the Saints are sizzling in an impressive win over…

ABC News
Richmond hang on for AFL win over Hawks