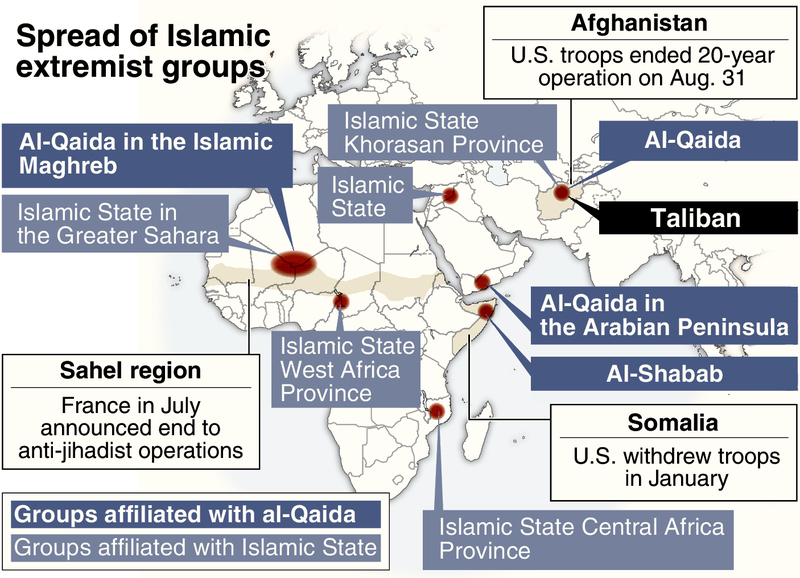 There are fears that groups affiliated with the international terrorist organization al-Qaida and the Islamic State (IS) militant group will increase their activities in Taliban-held Afghanistan and various parts of Africa.

Twenty years after the Sept. 11, 2001, terrorist attacks on the United States, international terrorism has been on the decline. The "fleeing" of the U.S. military, however, could give momentum to extremist ideas that have spread to various parts of the world.

"Afghanistan will become a haven for terrorists," said Nabil Naeem, an Egyptian former member of al-Qaida, in an interview with The Yomiuri Shimbun on Sept. 2.

Naeem traveled to Afghanistan with the current al-Qaida leader, Ayman al-Zawahiri, and the two underwent military training together. Judging from his own experience, Naeem said extremist fighters on a watch list of U.S. and European security organizations are likely to gather in Afghanistan as a haven.

The Taliban has vowed to keep out international terrorism. However, the Haqqani network, the hardline element of the Taliban, is said to maintain military connections with al-Qaida. The suicide bombings near the international airport in Kabul on Aug. 26 exposed the Taliban's inability to contain terrorism.

The current situation in which people who follow Islamic extremist ideology are heading for Afghanistan is reminiscent of 2014, when the IS expanded its power in Iraq and Syria. About 30,000 people from 86 countries are said to have traveled to Iraq and Syria to join the IS.

The group at its height controlled an area from northern Syria through northern Iraq and established a system to govern the area based on its own interpretation of Islamic law. It was hostile to the United States and Europe and was deeply involved in international terrorism, including the 2015 attacks in Paris.

The 20-year U.S. war on terrorism weakened al-Qaida and the IS, and led to the death of charismatic leaders Osama Bin Laden and Abu Bakr al-Baghdadi.

However, the potential threat of international terrorism has not disappeared. Extremists have scattered around the world and continued their activities while "indigenizing" themselves in various regions.

On Aug. 31, the day the U.S. military completed its withdrawal from Afghanistan, al-Qaida issued a statement and called for preparations for the "next stage of the struggle" to "liberate" the Islamic world.

Certain regions in Africa, where al-Qaida and IS-affiliated groups are embedded, are of particular concern.

Islamic State West Africa Province (ISWAP) militants based in Nigeria attacked a town in the northeast of the country in late August, killing 17 people, including government solders and aid workers. In Somalia, the al-Qaida-affiliated Al-Shabab has recently carried out a series of suicide bombings and other attacks.

According to the Institute for Economics & Peace's Global Terrorism Index, 41% of the terror attacks by the IS were concentrated in sub-Saharan Africa.

Prior to the pullout from Afghanistan, the U.S. military completed its withdrawal from Somalia in January. France also announced an end to its anti-extremist operations in the Sahel region.

African militant groups are currently focusing on overthrowing the rulers of the area and establishing an Islamic state, rather than waging international terrorism against the United States and European nations. Their primary targets are government troops and local residents.

However, Alexandre Marc, a nonresident senior fellow at the Brookings Institution in Washington, warned in an interview with The Yomiuri Shimbun that, without intervention by the United States and France, "jihadi insurrections" could quickly overrun major cities in Africa and become a global threat, possibly leading them to engage in international terrorism to assert their presence.