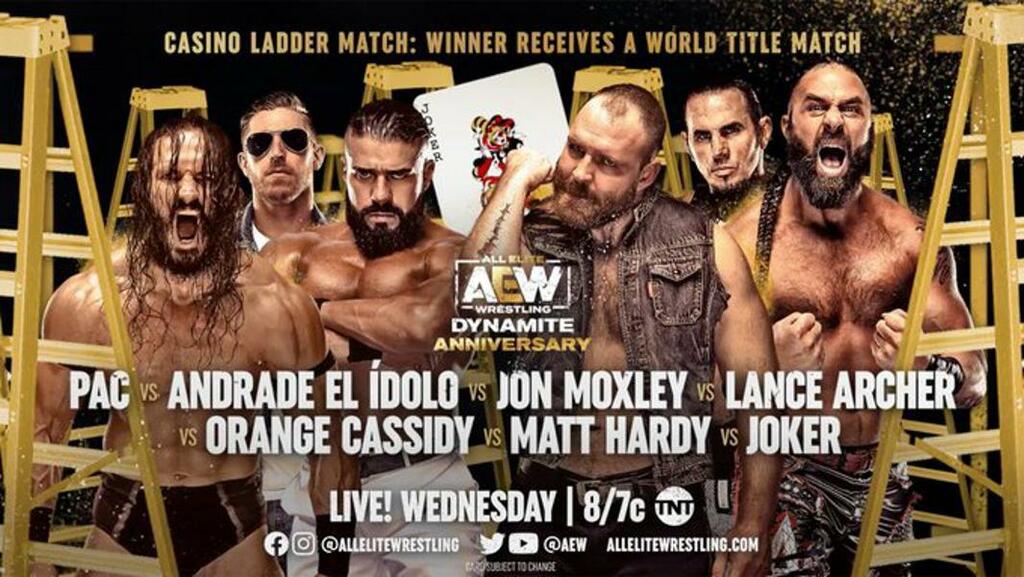 Dynamite also advertised an eight-man tag team match pitting The Elite against Bryan Danielson, Christian Cage and The Jurassic Express, Sammy Guevara vs. Bobby Fish for the TNT Championship and Hikaru Shida vs. Serena Deeb with Shida going for her 50th win. AEW also advertised a huge announcement fro Tony Khan, which turned out to be Tony Schiavone announcing the Women’s TBS Championship.

Fans popped huge and chanted “Holy shit!” after The Young Bucks performed their signature double—kiss on Adam Cole. Some may have their issues with this spot, but you cannot argue with how over it is with the live crowds.

This match quickly became a four-on-three when Christian was taken out due to a (kayfabe) neck injury.

Luchasaurus is so underrated. I know he's tall and muscular, which hurts you in AEW, but I see so much more potential in him than Jungle Boy.

Crowds came alive at the tease of Bryan Danielson and Kenny Omega, and instead of being a mega heel by tagging out, Omega engaged Bryan in competition.

The Elite messed up a triple-team powerbomb on Luchasaurus, only to encourage fans to chant “You f—ed up!”

The finish to this match was a unique quadruple BTE Trigger where Adam Cole pinned Jungle Boy yet again.

In the least-surprising moment of the night, Sammy Guevara’s pop was leaps and bounds above that of Bobby Fish, which was nonexistent, though they did get into Fish’s wrestling.

With tough competition from a Dodgers playoff game, this match figured to be a candidate for channel-changing, especially during the picture-in-picture.

Sammy Guevara was mauled by American Top Team and The Inner Circle took its own sweet time coming to his aid, but eventually they did.

AEW kept Chris Jericho’s music going during the entire run-in, similar to The Gangstas in ECW.

These fans were going crazy with boos and chants of “Shut the f—k up!” during Dan Lambert’s entire promo. He’s the best heel in AEW.

Chris Jericho thought his mic cut out and tossed it aside, and Lambert improvised with the segment fantastically.

With yet another match where there were no stakes and the result wasn’t in doubt, and the MLB playoffs on TBS, this might be one of the lower AEW Dynamite ratings in recent months, possibly even dipping below one million.

Following this segment, AEW actually had a segment where Dante Martin was interviewed in the ring. Black wrestlers standing in an AEW ring and talking is extremely rare, so I was shocked. Turns out, Martin will be fed to Malakai Black, just like Lee Johnson was. Much more on-brand for AEW.

Ricky Starks and Brian Cage had a very quick segment that you missed if you blinked or flipped the channel to the Dodgers-Cardinals game.

This match was built around Hikaru Shida possibly becoming the first woman to win 50 matches in AEW, trophy and all, and I had a fleeting feeling that she might lose and chase that honor.

Yes, Hikaru Shida tapped out to Serena Deeb, but I love the idea of Shida chasing 50 wins, especially as part of a feud against Serena Deeb. A great way to build up a heel.

This match was filled with spots of wrestlers bafflingly opting to settle personal grudges over going for the world title. This included Lance Archer waiting for the next entant to walk out despite being all alone in the ring.

On a show filled with big pops, the pop for Hangman Adam Page was out of this world.