By Isabel Dayman and Rebecca Opie 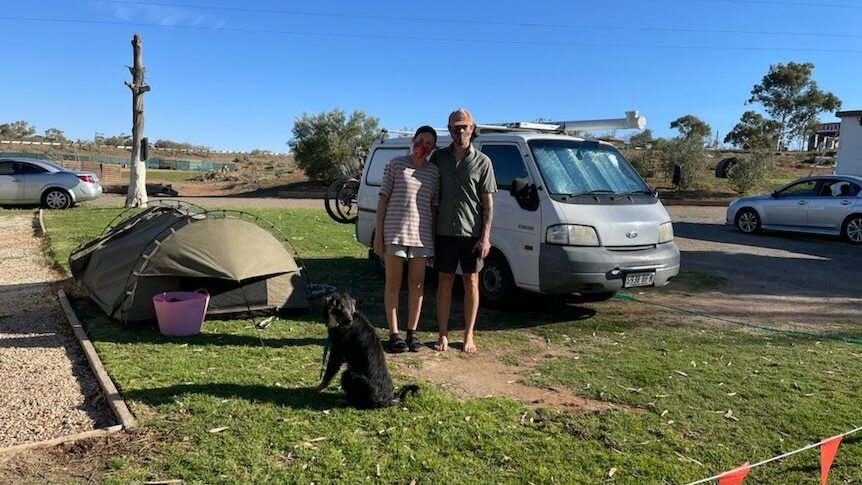 South Australians Jess Wood and Riley Poole have been stranded in a Broken Hill caravan park for five weeks, desperate to return home.

The couple, both aged 22, were on a camping trip when Ms Wood sustained a serious injury.

"On the 10th of August we applied for an SA Health exemption after a pretty traumatic accident I had when we were camping," she said.

"That's when we decided that we needed to go home."

After three weeks without word, they got in contact with SA Health.

"They said they referred the application, which meant that it was prioritised but unfortunately still we haven't heard a single thing," Ms Wood said.

Mr Poole said it has been hard for Ms Wood to recover from her injury while staying in the caravan park.

"The poor bugger is sleeping on the cold floor," he said.

"She needs care and she's sleeping in a swag because we were holidaying, so all we have in the car is a swag.

"It's the first experience really we've had with SA Health, both of us, and it hasn't been a nice one."

There are currently more than 7,000 exemption applications lodged with SA Health by people trying to enter South Australia from Victoria, the ACT and NSW, including from Broken Hill, which was previously part of a border bubble.

The silver city has recorded 40 cases during the Delta outbreak, including a 13-year-old girl who was transferred to Adelaide's Women's and Children's Hospital earlier today.

SA Health officials have said the Broken Hill area remains high risk and that it is doing everything it can to work through the requests.

"These guys were in a private ensuite so they weren't actually sharing facilities with other people.

"All these people that are here stuck have been getting tested every three days for COVID. They have been doing all the right things.

New South Wales Health would not confirm whether the positive case recorded in Broken Hill today had been staying at the caravan park.

"We haven't been contacted by New South Wales Health to say we operate any differently."

She said some of the stranded travellers had been staying at the caravan park for three months.

Ms Wood said the lack of communication and information from SA Health was taking a toll on everyone's mental health.

"Everyone is sick of waiting and waiting — checking emails, checking missed calls, anything. And every time we check, we are always disappointed.

She pleaded for SA Health to at least offer them a timeline.

"Even some hope, we would love some hope, something to show that SA Health are definitely working on fixing this mess," Ms Wood said.

"At the moment, there's none of that. We are just genuinely in limbo and it's so frightening."

During a press conference on Tuesday, South Australian Deputy Chief Public Health Officer Emily Kirkpatrick said despite the large volume of applications, each one needed to be assessed individually.

"Having sat on the exemptions panel, I can say this is a very, very difficult panel to sit on because of the sad stories we hear coming across, particularly for people who are applying who have been waiting many weeks to be able to cross the border," she said.

Dr Kirkpatrick said the exemptions team had increased in size and an online portal was set up last month to help the process.

"[We are] making adjustments now to the portal based on feedback that people would like to see where their application is up to, and we are very pleased that will hopefully be live very soon," she said.