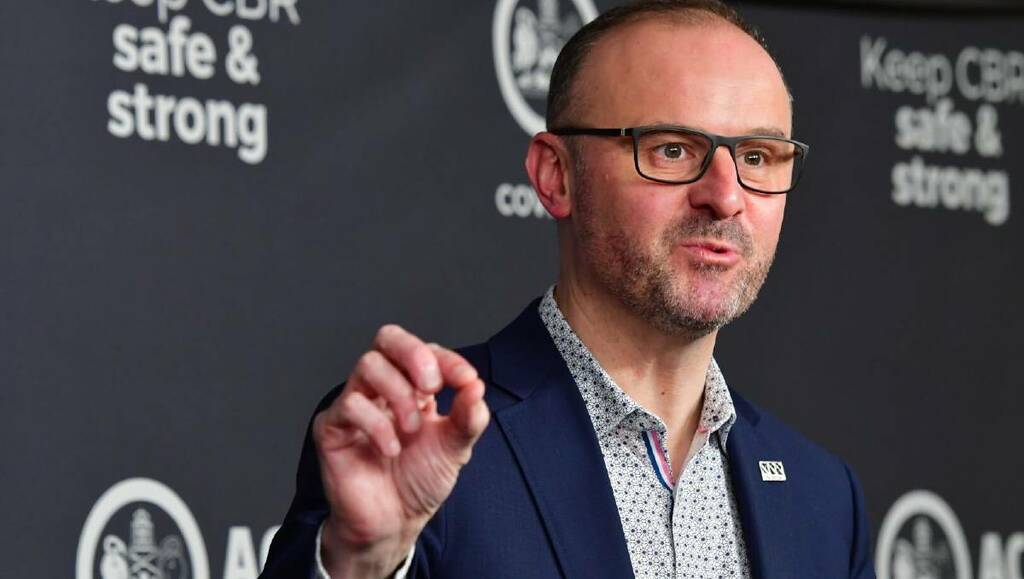 The ACT has reported 24 new cases of COVID-19 to 8pm on Thursday, with most linked and more than half in quarantine throughout their infectious period.

Eighteen of the cases have been linked, while six are under investigation.

ACT Chief Minister Andrew Barr said there were 15 people in ACT hospitals with COVID-19 on Friday morning, including four people in intensive care.

One person required ventilation. The youngest patient in hospital was aged under 12, and the oldest was in their mid-70s.

Of the patients currently in hospital, 11 are unvaccinated and three have had one dose. One person's vaccination status is not known.

Since the outbreak began, 42 people have been hospitalised with COVID-19.

"Those high levels of linked and in quarantine are the good news out of today's headline number," Mr Barr said.

Mr Barr said the ACT was the first state or territory to reach the milestone.

More than 30,000 Pfizer vaccination appointments have been added to the ACT government-run clinics, following the arrival of the territory's share of doses secured from the United Kingdom.

Mr Barr said the new doses would bring the vaccination program forward by about two weeks.

Chief health officer Dr Kerryn Coleman said the majority of people who had tested positive for COVID-19 in the ACT's outbreak were unvaccinated.

Of the 463 cases in the outbreak to date, 361 were unvaccinated, or 78 per cent. Nine per cent of cases had received one dose, while just 4 per cent were fully vaccinated.

The chief health officer again encouraged people to get vaccinated, given the high proportion of unvaccinated people testing positive for COVID-19 in the outbreak.

"This is not unexpected, given 84 per cent of our confirmed cases are aged under 45 years and actually haven't been eligible for vaccination for as long as the other age groups," Dr Coleman said.

Health authorities have linked 90 per cent of total cases - 414 out of 463 - to known cases or outbreaks. However, 40 cases are unlinked, which includes nine cases under initial investigations.

Residential construction was able to resume on Friday with plans in place to limit COVID transmission risks.

Deputy Commissioner Gaughan said there would be a significant focus on building site compliance, and officers could issue fines up to $5000 to businesses found to be breaching the rules.

"I just want to make very, very clear that power does exist under current legislation that enables us to shut down a building site for serious non-compliance where there's found to be a threat to public health. Clearly, we don't want to shut down building sites," Deputy Commissioner Gaughan said.

"We will not hesitate to do so if we need to to ensure public health is maintained."

The ACT will consider the impact of the NSW roadmap as part of plans to ease public health restrictions in the territory, but would not grant fully vaccinated residents freedoms before others.

NSW on Thursday announced it would allow fully vaccinated residents freedoms ahead of others as restrictions in the state eased.

Health authorities have again stressed the need to get tested for COVID-19 at the onset of even mild symptoms of the disease.

People who later tested positive for COVID-19 had waited days after becoming symptomatic before presenting to Canberra's emergency departments, prompting concern people were delaying getting a test.

Health Minister Rachel Stephen-Smith said on Friday the capacity to run COVID-19 tests in the ACT would be bolstered to 10,000 tests a day.

The ACT's testing turnaround time was excellent, but slowed when more swabs were collected a day than ACT labs could process, she said.

Ms Stephen-Smith said that capacity would come into its own if there was another surge in demand for testing.

The ACT reported 15 new COVID-19 cases in the 24 hours to 8pm on Wednesday, including at least eight people who were in the community for part of their infectious period.