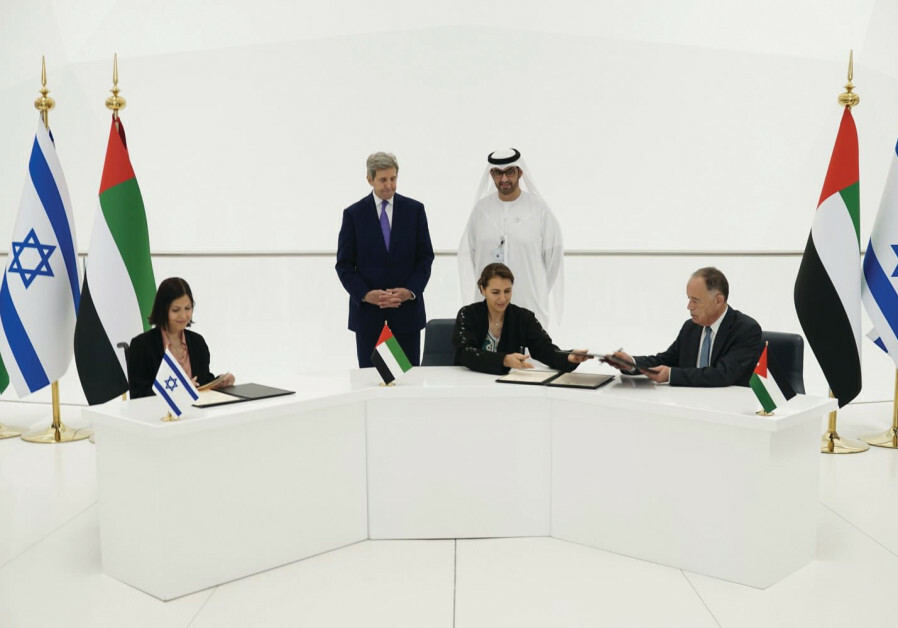 John Kerry, the former US secretary of state currently serving as President Joe Biden’s special climate envoy, finally got to help hammer out and watch the signing of a Middle East agreement on Monday.

It wasn’t, however, an Israeli-Palestinian accord, one that former defense minister Moshe Ya’alon said Kerry was “obsessive and messianic” about brokering.

Rather, it was the signing in Dubai of a tripartite energy-water accord between Israel, the United Arabs and Jordan.

Under this accord, a government-owned UAE firm will build a massive solar energy facility in southern Jordan, which will then sell the energy to Israel. Israel, in turn, will either build a new desalination plant or provide Jordan – via its current desalination facilities – with some 200 million cubic meters of water per year, quadrupling the amount of desalinated water it currently sells the Hashemite Kingdom.

The irony was striking since it was Kerry – in a terrible prediction that will always accompany a discussion of his Mideast diplomatic legacy – who famously said, at a conference in 2016, that Israel would never reach a separate peace with any Arab nation without first signing an agreement with the Palestinians.

Not only would this not happen, he stressed, but he was completely sure it would not happen.

“I’ve heard several prominent politicians in Israel sometimes saying, well, the Arab world is in a different place now, we just have to reach out to them and we can work some things with the Arab world and we’ll deal with the Palestinians. No, no, no and no,” Kerry said at the Saban Conference in 2016.

“There will be no advance and separate peace with the Arab world without the Palestinian process and Palestinian peace,” he continued with complete certainty. “Everybody needs to understand that. That is a hard reality.”

Those comments came less than a month before the Obama administration, in which Kerry served, enabled during its final month in office a sharply worded anti-settlement UN Security Council resolution, and just before Kerry delivered a rambling swan-song speech at the State Department on the Mideast where he pinned the onus of the blame for the diplomatic stalemate with the Palestinians on Israel.

Yet, there he was on Monday, standing next to the UAE crown prince, watching the fruits ripen from just precisely the type of separate peace agreement that he was so certain would never materialize, and did nothing to advance.

The importance of what was signed on Monday goes beyond the supply of renewable energy to Israel and desalinated water to Jordan. This deal moves the benefits to be accrued from the Abraham Accords to other countries in the region, and not just to each of the Arab countries with which Israel reached an agreement: the UAE, Bahrain, Morocco and Sudan.

As Ghaith al-Omari and Simon Henderson wrote in an article for the Washington Institute for Near East Policy, this deal “demonstrates additional ways to build on the Abraham Accords.

“So far, most of the diplomatic activity surrounding the accords has focused on adding new countries or deepening bilateral relations between Israel and its new partners,” they wrote. “These efforts should be continued, but the solar/water deal shows how the accords can simultaneously deepen Israel’s relations with the first generation of Arab peacemakers.”

This deal could significantly warm up ties with Jordan, which the Bennett government has tried to put on a healthier footing than was the case under prime minister Benjamin Netanyahu.

Prime Minister Naftali Bennett did this immediately after taking office by secretly traveling to Amman to meet King Abdullah II, and by announcing that Israel would increase the amount of desalinated water sold in the kingdom.

The deal also takes the relationship between the two countries beyond the security field, where – with the exception of Israel’s sale of natural gas to Jordan – it has rested almost exclusively until now, and widens it to the civilian realm.

Not everyone was cheering, however. Reflective of this was an article in the anti-Israel UK-based Middle East Monitor, which quoted “Palestinian expert” Saleh al-Naami as saying the deal “proves that the Jordanian regime is increasingly serving Israeli interests.”

Naami said the plan will benefit the “settlements” and allow Israel to dump its industrial waste on Jordan.

“Jordan has the desert in the south, and this will be used for a massive solar plant to generate electricity to be exported to the Israeli settlements in the Negev and the West Bank,” he said. “Part of the Israeli industrial infrastructure, which has polluting emissions that harm the densely populated areas in Israel, will be relocated to the Jordanian desert under the pretext of hiring Jordanian workers.”

Notwithstanding these sentiments – which will surely be echoed by those in Jordan fiercely opposed to any cooperation with Israel – the deal could serve as an example for further cooperation with Jordan, as well as with Egypt, and demonstrates just how the Abraham Accords are transforming the region.

ANOTHER EXAMPLE came two days later, when Defense Minister Benny Gantz flew to Morocco for a two-day visit, the first visit by an Israeli defense minister to one of the countries with which Israel has begun to cooperate as a result of the Abraham Accords.

The Defense Ministry released a statement saying that Gantz and his Moroccan colleague Abdellatif Loudiyi signed a groundbreaking defense memorandum of understanding.

Let that sink in for a moment. Israel’s defense minister went to an Arab state that for years refused to acknowledge any ties with Israel, and signed a defense memorandum that “formalizes defense relations” between the two countries and “establishes a foundation that will support any future cooperation.”

This memorandum will enable the defense establishments of both countries to enjoy “increased cooperation in the fields of intelligence, industrial collaboration, military and training,” the statement read.

Three years ago, such a development would have seemed a pipe dream. This week the Moroccan press ran stories of how the agreement will enable the manufacture in Morocco of killer drones equipped with Israeli technology, and last week how the North African country bought Israel’s SKYLOCK dome system – an anti-drone weapon that detects and destroys enemy drones.

According to The North African Post, “The Israeli military equipment and technologies give Morocco a strategic advantage and superiority in the region, making Algerian generals, de facto rulers, extremely nervous.”

Indeed, Algeria – Morocco’s neighbor and arch-foe – was infuriated by the Moroccan-Israel rapprochement and the fact that the US recognized Morocco’s sovereignty over Western Sahara as a result of Rabat joining the Abraham Accords. Algeria has long backed the Polisario Front in Western Sahara against Morocco.

Shortly following the visit of Foreign Minister Yair Lapid to Morocco in August, Algeria severed ties with Morocco, using remarks Lapid made in Rabat voicing concerns about Algeria’s role in the region and its relationship with Iran as one of many pretenses for the move.

If Algeria was infuriated by the visit of Israel’s foreign minister, one can only imagine how it must be steaming now that the Jewish state’s defense minister was hosted in Rabat on a formal visit and talked about security cooperation and arms deals.

One Algerian reaction to the Israeli-Moroccan rapprochement has been closer ties with Iran, a friendship that will only drive Morocco and Israel further into each other’s embrace – further proof of how the Abraham Accords have thoroughly realigned the region.