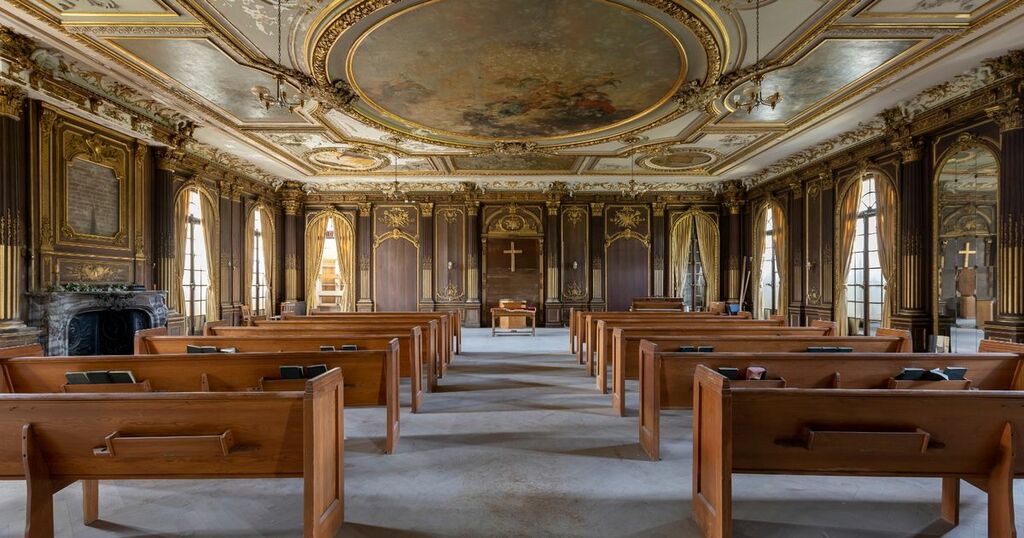 They once welcomed aristocrats and the world's wealthiest businessmen through their doors - now, they're at the mercy of nature and vandals.

Through a series of unfortunate - and at times spooky - events, these grand palaces have been lost to time, their majestic facades left crumbling over decades of neglect.

While many European stately homes were hastily abandoned during the Second World War, others have been subject to dark legends filled with grim accidents and grisly murders.

And one of America's grandest ever homes was left to rot following a heartbreaking tragedy involving the Titanic.

Here, we step inside the halls of the world's most creepy abandoned palaces to discover their secrets.

One of America's truly historic mansions, Lynnewood Hall was the grand residence of Peter Arrell Browne Widener, now recognised as one of the nation's 100 richest men.

Constructed following the death of his wife, Hannah, onboard their family yacht, the sprawling estate in Montgomery County, Pennsylvania, was completed in 1900, surrounded by 480 acres of land.

After living there for 15 years, Widener passed away and the home had been due to be inherited by his eldest son, George.

However, three years prior, George and his family had invested in the doomed HMS Titanic, proudly taking up a spot for its maiden voyage, where they are said to have dined with the captain.

Both George and his son Harry lost their lives when the ship hit an iceberg in 1912, and the estate was consequently passed down to Widener's only surviving son, Joseph.

Although Joseph kept the mansion in pristine condition, it was neglected when his children declined to take on responsibility for it following his death in 1943.

In the 1950s, it was purchased for $192,000 by a group of evangelical Christians, but they stripped it of its assets and sold all but 33 acres of its land.

Much of its grandeur still remains to this day, with an historic art gallery still beatifully preserved, though pictures show the lavish swimming pool and bathroom have suffered years of decay.

A campaign remains ongoing to save the estate, which has been described as the 'American Versailles'.

Fittingly for such a Gothic looking stately home, the Chateau Miranda has a dark and grisly past.

Designed in 1866 by English architect Edward Milner for the Liedekerke-Beaufort family, the chateau was located in the village of Celles in Belgium.

The family remained in place until the Second World War, when incredibly a small portion of the Battle of the Bulge took place on the property and it was occupied by Nazi forces.

Following their defeat, the chateau became known as the 'Noisy Castle' when it was taken over by the National Railway Company of Belgium for use as an orphanage.

As if that wasn't creepy enough, it was also used as a 'holiday camp' for sick children.

Sadly, the building's last known owners couldn't stump up the funds for renovations, and it was further gutted by a fire in 1995.

Ravaged by decay and vandalism, it was decided in 2016 that the chateau would be destroyed, marking a sorry end to the once proud aristocratic home.

The Chateau Verdure on the outskirts of Paris is thought to have been built in 1863, but a grim curse is said to have plagued its owners over the decades.

The grand home was first owned by a doctor and his seamstress wife, according to urban legend.

One night, the wife is said to have perished in a tragic road accident and died back at the home.

Since then, legend has it that any family trying to buy up the property have gone on to suffer a tragedy.

Regardless of such stories, there's no escaping the fact that the chateau has fallen into sad neglect.

Also known as the Schoolgirl's Castle or Pavlovich Manor, it now lies forgotten in an affluent French suburb, having been abandoned since the 1990s.

Inside, a dusty old grand piano sits beneath a sweeping stone staircase, while the floor above has completely collapsed.

Designed in the 1600s for a Polish noblemen, Pidhirtsi Castle was once considered one of the finest buildings in Ukraine.

For centuries, it was passed down through the generations, until the First World War marked the beginning of its sad decline.

Seized by Russian soldiers, the castle was ransacked, with priceless antiques and even its grand marble fireplaces stolen.

Years later, it was pillaged again during the Polish-Soviet War, according to Love Property.

When the Second World War broke out, its owner, Prince Roman Sanguszko of Poland, was forced to flee to Brazil, leaving the house at the mercy of the Soviets.

After being severely vandalised, it was converted into a sanatorium for tuberculosis patients, but in 1956 disaster struck again when a fire gutted the property.

Fortunately, in the late 1990s Pidhirtsi was turned into a museum. Whilst still in a state of disrepair, efforts are being made to return it to its former glory.

'House of Witches' rocked by murder and suicide

Also known as the Red House, Ghost Mansion and House of Witches, the Villa De Vecchi - as you might imagine - has a rather creepy back story.

Sitting just east of Italy's Lake Como, the supposedly haunted house was built in the 1850s for Count Felix De Vecchi, who was seeking a summer residence to enjoy with his family.

Architect Alessandro Sidioli died a year before the villa was completed - the first in a series of apparent dark omens.

The count, who was the head of the Italian National Guard, settled in for a few years, but in 1862 disaster struck.

Returning home, he was devastated to find his wife had been brutally murdered, while his daughter was missing.

After a long and unsuccessful search to find his child, he died of suicide later the same year.

The home passed on to the count's brother, but was abandoned after the Second World War and fell into ruin in the 1960s.

Rumours of occult rituals and animals sacrifices have plagued the home ever since, but despite an avalanche destroying nearby houses in 2002, it has remained in tact.

A coincidence? Most probably, yes.