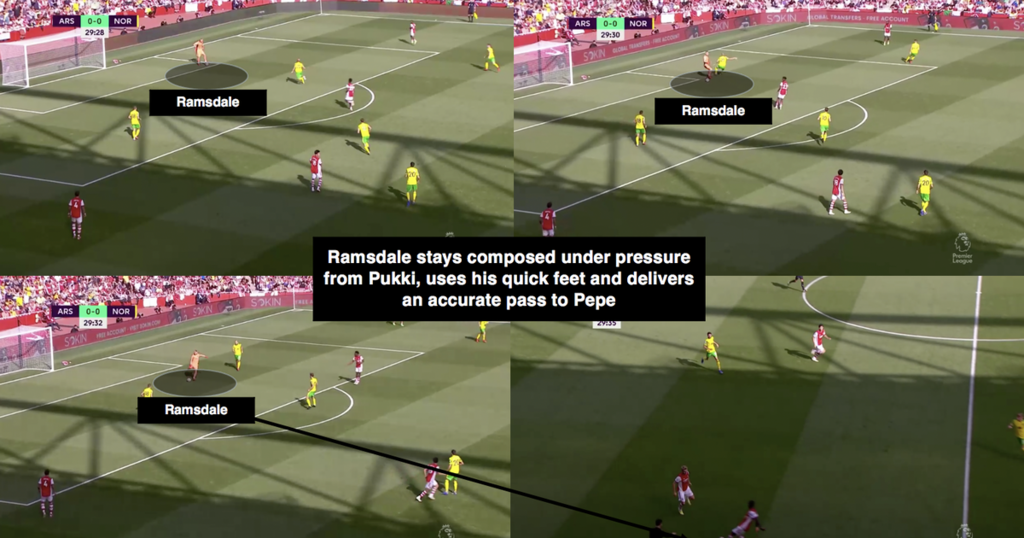 September's international break offered the Gunners some much-needed respite to give injured players like Kieran Tierney,and Gabriel time to recover, whilst also allowing Arteta time to re-think his strategy ahead of a crucial clash against Norwich City.

The Spaniard responded by making seven changes to the line-up that was decimated by City with Kieran Tierney, Bukayo Saka, Martin Odegaard and Pierre-Emerick Aubameyang the only four players to keep their place in the starting XI.

It was club captain Aubameyang that eventually netted the only goal of the game to help the Gunners climb up to 16th place and kick-start their campaign ahead of next week's trip to Burnley.

One of the changes that was made was between the sticks, with German international Bernd Leno dropped for new signing Aaron Ramsdale, who made his first Premier League start for the north London outfit.

Whilst Ramsdale was barely called into action by the Canaries he did demonstrate something that Leno has often been criticised of lacking - an impressive ability to distribute the ball to his teammates.

The former Bayer Leverkusen No.1 has always been an excellent shot-stopper but has struggled to replicate the passing ability that former Arsenal 'keeper Emi Martinez showcased towards the end of the 2019/20 campaign.

At the Etihad, Leno consistently gave the ball away, often kicking it long into the channels, without any real target identified. This allowed the Citizens to have the ball right after losing it, meaning Arsenal defenders had no time to readjust.

Similarly, Ramsdale frequently kicked it long against Norwich, in fact, the average length of his goal kicks were 57.2 yards on Saturday whilst Leno has averaged 45.6 yards per goal kick this term.

However, the Englishman was much more successful, completing 40% of his passes that exceeded 40 yards compared to Leno's 28%, albeit with a larger sample size.

Perhaps the most notable incident Ramsdale dealt with on Saturday was when he was being pressed by Norwich frontman Teemu Pukki. The 22-year-old stayed composed under pressure, re-adjusted his footing to outsmart Pukki before delivering an inch-perfect pass to Nicolas Pepe on the right flank.

During Arsenal's Premier League curtain-raiser against Brentford, Leno was faced with a similar situation when Bryan Mbeumo was pressing. However, the 29-year-old wasn't able to stay composed before slicing a poor kick right to the Bees, a common theme of the game.

Leno is undoubtedly a gifted 'keeper and more proficient when it comes to pure shot-stopping, although, Ramsdale's impressive distribution vindicated Arteta's decision to start him on Saturday and gives the Spaniard a lot to think about ahead of next week's trip game at Turf Moor.