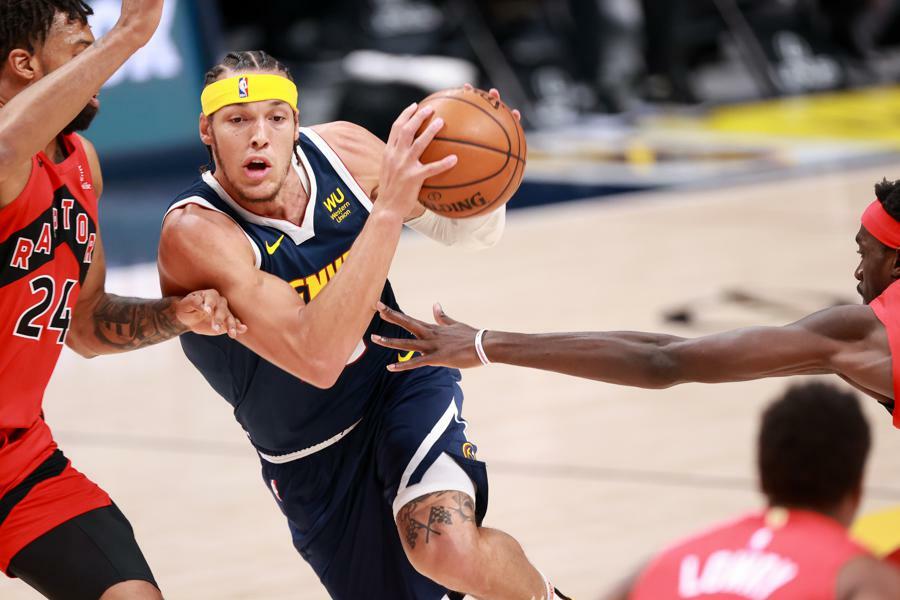 Aaron Gordon was visibly thrilled after being traded to the Denver Nuggets from the Orlando Magic at the NBA trade deadline last March.

“It's a huge relief to be part of a great organization,” he shared in his first media call with his new team.

“I'm just happy that I found a new home.”

Gordon can now happily keep calling Denver his home for years to come, after reaching terms on a four-year, $92 million extension with the Nuggets, as first reported by The Athletic’s Shams Charania.

The deal represents what is most likely the next-to-last offseason move by Nuggets president of basketball operations Tim Connelly, general manager Calvin Booth, and Denver’s front office staff. Their last piece of unfinished business: Negotiating yet another extension with rising star Michael Porter Jr., who told the Denver Post’s Mike Singer that “everything is going smooth as far as that goes.”

Presuming Porter similarly finds common ground with Denver, it could potentially result in him landing a deal at or near his maximum possible rookie contract extension salary of five years, $168 million.

Both of these extensions, should they get finalized, will come on the heels of additional offseason free agent spending by the Nuggets, who re-signed Will Barton III (two years, $32 million), JaMychal Green (two years, $17 million) and Austin Rivers (one year, $1.7 million per Spotrac), along with landing veteran journeyman Jeff Green (two years, $10 million) to reinforce their frontcourt depth amid the departure of big men Paul Millsap and JaVale McGee.

Lumped in with the current maximum contracts of reigning MVP Nikola Jokic and star point guard Jamal Murray (who will be out until at least early 2022 rehabilitating from an ACL tear), it all adds up to… a lot. A very big, expensive lot.

While the new deals for Gordon and Porter would not kick in until the 2022-23 season, Denver’s payroll in the upcoming year brushes right up against the 2021-22 luxury tax threshold of $136 million, with the forward duo’s contracts vaulting it well above the projected 2022-23 tax limit of $145 million that season. And (barring major salary-shedding moves, Denver would remain well over the luxury line for years to come after that.

This projected Nuggets salary structure cuts sharply against the grain of the penny-pinching reputation of owners Stan and Josh Kroenke. Fairly or not, throughout their ownership tenure the Kroenkes have garnered the image of chronic avoiders of luxury tax payments (as well as other important expenditures such as a practice facility worthy of modern NBA standards).

Those who believe in the willingness of the Kroenkes to spend into the luxury tax will point out that when they fielded a Nuggets team which they believed capable of winning a championship, they did in fact finance payrolls over the tax threshold on three occasions. Those who doubt counter that the last time they actually did so was over ten years ago, and that their prevailing priority has more often than not been staying under the line, sometimes even at the expense of the team’s success.

When I asked Tim Connelly in his end-of-season press conference last June if he had discussed with ownership whether they would approve of his front office spending over the tax limit to maintain a title contention-level roster, he was unambiguous about his understanding that the Nuggets would have the green light to spend.

“Ownership has been great,” he replied, emphasizing that “they’ve gone into the tax in the past.”

“We have no financial restraints in terms of trying to further develop a championship-level roster.”

Adding more context, Connelly described the Kroenkes as “basketball-obsessed,” saying that “they will do whatever they can to make sure [the Nuggets] have the best possible chance.”

Talk can be cheap in the NBA, where for a slew of reasons (intentional and otherwise) many claims and allusions of future possibilities never actually come to fruition.

But for Denver, the situation has in fact become objectively and qualitatively different now.

After having assembled the core group of players they believe constitutes a legitimate and perennial championship contender, the Nuggets are now decidedly on a trajectory in which paying the tax will in effect be unavoidable without breaking up the roster they so carefully constructed.

Nuggets fans who have long been calling for the Kroenkes to spend more on building a winning team, take heart. You are about to get your wish.

Assuming the Gordon and Porter deals go through as expected, those two along with all of Jokic, Murray, Barton, Monte Morris, Zeke Nnaji (assuming the Nuggets exercise their team option) and 2021 first-round draft pick Nah-Shon "Bones" Hyland will all be on guaranteed contracts through at least the 2022-23 season.

And on top of all this, after winning the MVP award, Jokic is all but guaranteed to become the recipient of a “supermax” contract extension which would take effect in the 2023-24 season, and represent the biggest contract in the history of the league:

In short, unless things were to somehow go terribly wrong for Denver, spending very deep into the luxury tax (and even deeper when the repeater tax kicks in) is inevitable.

This kind of big spending is a brave new world for the Nuggets, but a fitting one for a squad which – if it hasn’t already earned the label of “most talented roster Nuggets ever” – has at the very least one of the best and most realistic chances in the organization’s history to not only reach the Finals, but the Larry O’Brien trophy home to Denver for the very first time.