A year into Abraham Accords, business activity is picking up 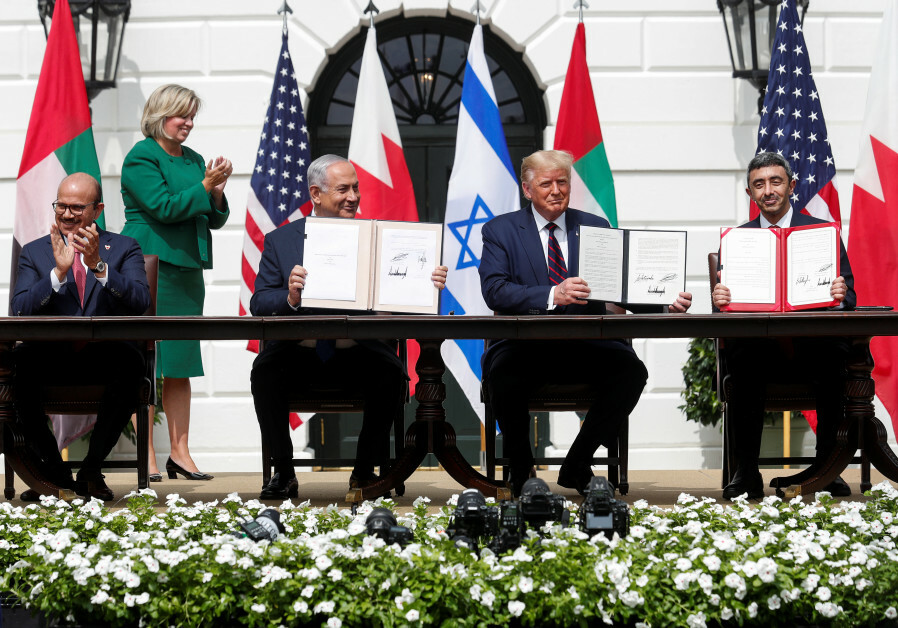 Trade between Israel and the United Arab Emirates has blossomed since the Abraham Accords, which normalized Israel’s relations with UAE and Bahrain, were signed at the White House in Washington, DC, on September 15, 2020.

According to data published by the Central Bureau of Statistics, trade in goods between Israel and the United Arab Emirates reached about $610 million from January to July 2021. Israel exported $210m. and imported $400m., with diamonds comprising about half of all trade.

Those numbers don’t include hi-tech services exports, which comprise a significant share of bilateral trade, the Israel Export Institute noted.

“I expect that business relationships between Israel and the UAE will move much more quickly in the coming year,” says Meggie Abecasis, VP Commercial at Vertical Field. “During the first year, each side was getting to know each other and creating trust. Israelis were thrilled to be visiting Dubai, and Emiratis were excited to be in Tel Aviv. Now that the initial excitement has subsided and people have spent the time developing their relationships, this will be the time where a lot starts to happen.”

Vertical Field, which offers solutions for urban agriculture by growing crops vertically on walls, is one of the hundreds of Israeli companies that have spent the past year building business connections in the Gulf area. After months of meetings, the Ra’anana-based company finally signed a memorandum of understanding with an Emirati partner recently, and is getting set to ramp up business there.

Both sides are very optimistic about future trade growth, with hopes of exceeding $1 billion this year and reaching $3b. within three years, trade organizations say. That means that if year one was filled with lots of talk about peace, relationships and potential, the coming years will yield significant returns.

"A year after signing the Abraham Accords there’s great involvement in the Israeli business community,” says Adv. Uriel Lynn, president of the Federation Israeli Chambers of Commerce. “However, we have only scratched the surface when it comes to realizing the true potential that will evolve from the collaboration between the two economies.

“The Abraham Accords are mainly about economic diplomacy, and they have impacted the region significantly,” said Adiv Baruch, chairman of the Israel Export Institute. “We are building the infrastructure for a proper economic relationship between Israel and the UAE, and with a billion dollars of bilateral trade in the first year, it is a huge success that shows the entire region that we are here to do it together. Both countries are leaders in innovation, and with the accords providing access to new markets with four billion people we haven’t reached previously, our relationships will continue to increase.”

Israeli businesses are starting to see the UAE not just as a new market, but as a hub where they can access markets in South Asia, East Africa, India and Bangladesh for the first time.

“These are markets with billions of people, and you can’t work with them from Tel Aviv,” says Dorian Barak, co-founder of the UAE-Israel Business Council, an organization connecting businesses in the two countries. “The UAE is the place where everyone congregates to do business, and Israel has finally been admitted to that club.”

The UAE is also looking to bring more Israeli companies into its 35 free-trade zones, which offer tax exemptions, world-class technology infrastructures, and shipping and trade systems designed to made business as simple as possible.

Gadi Gertel, chairman of the Israel Jeweler’s Association, is particularly optimistic about the accords’ prospects for the jewelry industry.

“When the accords were signed, the Chambers of Commerce connected us with the Dubai Gold and Jewelry Group, the largest trade body for Dubai’s jewelry industry,” Gertel says. “They hosted us very graciously in Dubai in December, and we have followed up with meetings on Zoom. This November we will travel again to Dubai for the first-ever Israeli sales event there, where top retailers from around the region will be able to buy from our inventory.”

“This is something that could change the entire diamond industry for Israel. The Emiratis see Israel and its relationship with the United States as a channel for them to reach the huge US market for the first time. That is something they have been seeking for a long time. For us, the UAE is a market that can also serve as a gateway to the broader Gulf region and nearby markets. So this is a win-win situation that can create all kinds of new connections and large opportunities.”

Other industries also see massive opportunities, but achieving them may not be easy. In a survey of 500 Israeli business leaders, the Federation of Israeli Chambers of Commerce found that some 43% of respondents said they had difficulties finding a business partner in the UAE, 19% said financing growth in the Gulf was a challenge for them, and others said they had challenges with gathering relevant market data, arranging shipping logistics, complying with regulatory requirements, and bridging language and cultural differences.

The Economy Ministry, the federation and numerous other organizations offer services, programs and missions to help companies bridge these hurdles. On Monday, for example, the Israel Export Institute said it will bring some 250 businesspeople and entrepreneurs to Abu Dhabi and Dubai on a business mission in partnership with Bank Hapoalim.

The difficulties of forging new relationships in Muslim countries were exacerbated by the pandemic, which hampered tourism and business travel between the new peace partners. The military flare-up with the Palestinians in May also tested both sides’ commitments to peaceful relations, and Israelis were forced to have many uncomfortable conversations that often led to even stronger relationships, Fleur Hassan-Nahoum, co-founder of the UAE-Israel Business Council and deputy mayor of Jerusalem, has said.

“We were in talks with a potential partner in Abu Dhabi when the conflict with Gaza broke out in May,” says David Santar, CEO of R.R. Knowledge Systems and Technologies, which makes software for managing medical clinics and optics stores. “We had found a partner that was a perfect fit, and their win-win approach to business made negotiations very easy. When the military campaign started, we stopped having meetings for a few weeks, but then we started talking again after it ended. Now that we have agreed to work together, and have started bringing in clients together, I expect that our relationship will be strong enough to weather future conflicts.”

“It’s a different culture, where relationships come before business,” Abecasis says. “Israelis like to go quickly and move toward signing an agreement. In Dubai, the pace is very different. People have a lot of respect, and are in awe of Israeli innovation, but you have to build the trust first. Zoom meetings have helped a lot in the process, but face-to-face meetings are key here. Now that we have all spent the past year planting the seeds of trust, I believe the benefits will start to blossom very quickly.”