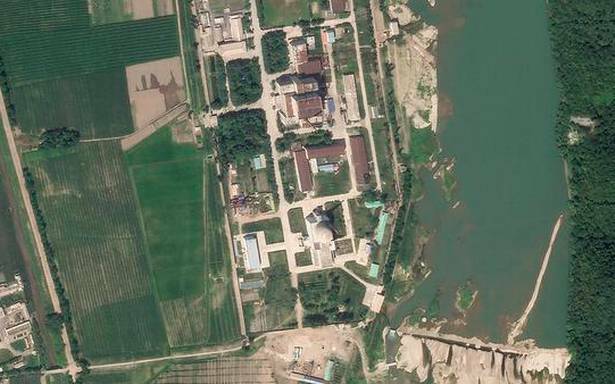 The resumption of North Korea’s largest fissile material production reactor, after operations were ceased in December 2018, has sparked speculation about its real and symbolic significance. The International Atomic Energy Agency (IAEA) has underlined that the restart of activity in Yongbyon constitutes a violation of UN Security Council resolutions.

This is the same reactor that the North Korean leader Kim Jong-un, in a bilateral summit in 2019 with then U.S. President Donald Trump, offered to fully dismantle in exchange for securing complete relief from international economic sanctions, but to little avail. The ageing five-megawatt reactor at the Yongbyon complex has been central to the North Korean reprocessing of spent fuel rods to generate plutonium, besides the production of highly enriched uranium for the development of atomic bombs. But observers also point to the diversification of the country’s nuclear weapons and missile programmes to covert locations over time. Hence, they are cautious not to exaggerate the importance of the recent reopening.

Indeed, the opaque nature of Pyongyang’s nuclear programme partly accounts for the current confusion over the motives behind the restart of the reactor. In June 2008, in order to buttress its denuclearisation commitment to the U.S. and four other countries, Pyongyang blew up the cooling tower at the Yongbyon complex. The move did little to assuage the concerns of critics, either regarding the plutonium stockpile the regime had amassed or its engagement in clandestine nuclear proliferation.

But it nevertheless led former U.S. President George W. Bush to ease some sanctions against North Korea, which he had in 2002 dubbed part of the “axis of evil”. More controversial was Washington’s decision to revoke, less than two years after Pyongyang’s first nuclear explosion of 2006, the designation of “state sponsor of terrorism”. North Korea was placed on the terrorism list after the 1987 bombing of a South Korean airplane.

A few months after blowing up the cooling tower in 2008, Pyongyang barred IAEA inspectors access to its reprocessing plant in the Yongbyon complex and eventually expelled them the following April. In November 2010 American scientist Siegfried Hecker confirmed accounts that North Korea had rapidly built a uranium enrichment plant at Yongbyon.

The above sequence of developments was almost a rerun of events nearly a decade earlier. In 1994, Pyongyang barred IAEA access to the Yongbyon complex amid suspicions that the country was generating plutonium from spent fuel. The U.S. had initially planned pre-emptive precision strikes on the nuclear sites, but was deterred against such a misadventure by a blueprint for a peace deal brokered by President Jimmy Carter. The so-called 1994 Agreed Framework, an executive agreement signed by President Bill Clinton, required Pyongyang to freeze all nuclear activity and allow inspection of its military sites in return for the construction of two light water reactors. The accord broke down in 2002.

The Biden administration has adopted a pragmatic path of declaring its readiness to resume negotiations with Pyongyang without the grandiose distractions of the Trump era that amounted to exerting little diplomatic leverage. Meanwhile, Mr. Kim has spurned all such overtures until he can win concrete relief from sanctions, especially those relating to raw materials exports. Apart from the punitive impact of such measures on an impoverished people, the protracted stand-off over North Korea reinforces the hollowness of the doctrine of deterrence and begs the question whether proliferation can ever be prevented just because nuclear weapons states want to perpetuate their dominance. The UN treaty on complete abolition of atomic arms, whose deliberations were boycotted by all nuclear weapons states, is the morally superior alternative.