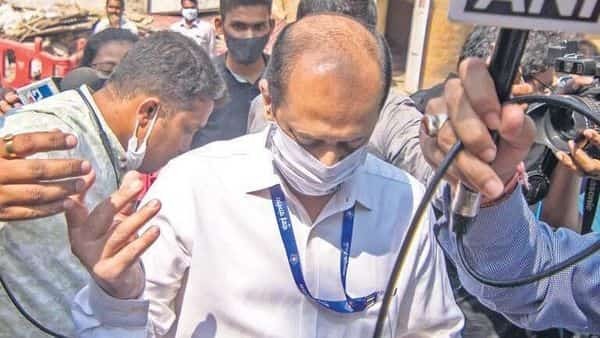 It was a "secret operation", Sachin Waze, former Mumbai police officer, told his official driver who was with him when an explosives-laden SUV was parked near Mukesh Ambani's residence 'Antilia' February this year, National Investigating Agency (NIA) said. The agency has filed a charge sheet  against Waze and nine others in connection with the case and subsequent murder of Thane-based businessman Mansukh Hiran.

The minute-by-minute statement of Waze's driver was taken by the NIA and was included in the charge sheet.

The driver  told NIA that at around 05.30 pm on February 24, he had driven Waze to 'Dnyaneshwari' bungalow, former home minister Anil Deshmukh's official residence and returned in about an hour.

Waze asked him to change the number plates of Mahindra Scorpio, the explosives-laden vehicle which was placed outside Ambani's resdince, and an Innova car, multiple times, the driver added.

Waze had asked him to take specific routes and pay toll plazas. "At about 2.10 am I was following the Scorpio car driven by Waze at a very slow speed on Carmichael Road. At a particular point, he stopped the Scorpio and parked it on the left side of the road," the driver stated.

"Accordingly, I also stopped my Innova car at a distance of about 40 to 50 meters behind the Scorpio," he added.

“He returned to the Innova car after about five minutes and removed his face mask and shield. Waze then asked him to drive ahead, and after a while the former API (assistant police inspector) realised that his identity card was missing and asked the driver to check in the car (Innova), but it wasn't found," the driver said.

As per his statement, they then came to Waze's residence in neighbouring Thane district, where Waze went inside to search for his identity card. However, he returned after about 20 minutes, and told the driver that he had probably forgotten the card in the Scorpio. At around 4.30 am they returned to the Carmichael Road, where Waze went inside the Scorpio and returned after a while. Waze then directed the driver to take him to Thane.

The driver also stated that Waze had taken his phone and switched it off when he reported to duty (on February 24). It was returned only after he drove Waze home, the driver told the NIA. In his statement, the driver further said when he enquired about the entire episode, Waze told him it was a "secret operation", and asked him not to reveal it to anyone.

"On February 26, I was attending the marriage ceremony of a colleague when I came to know about the incident from TV news channels. I was very scared on seeing the said news, but I did not tell this story to anyone," he added.

The NIA also said that Waze placed the SUV near Ambani's house to regain his reputation as a "super cop". Thane businessman Mansukh Hiran was subsequently killed as Waze thought him to be the "weak link" in the conspiracy, the NIA said, alleging that Pradeep Sharma, a former police officer, was roped in to execute the murder.