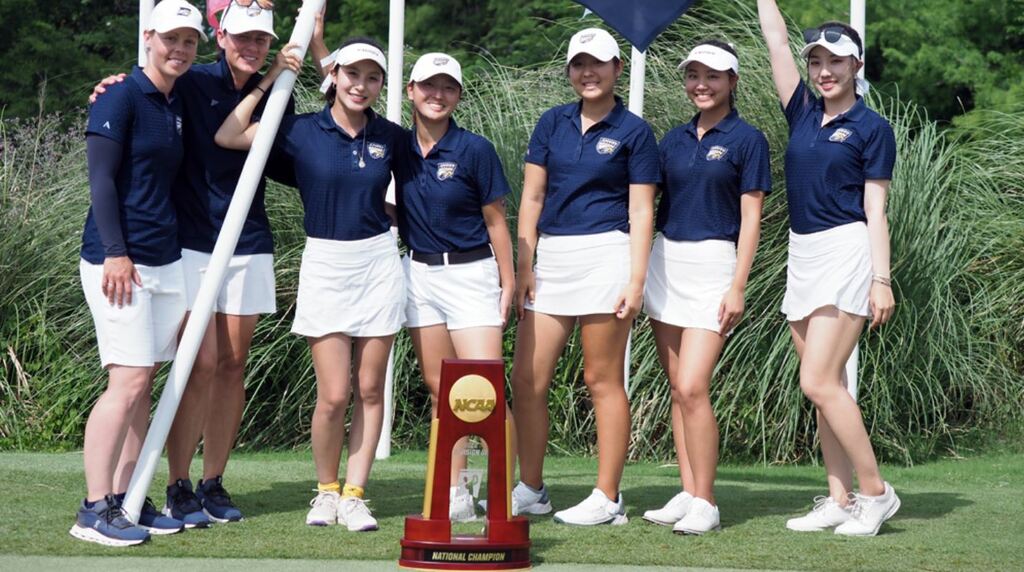 Methodist won the team and individual title at the 2022 NCAA Division III Championship.

The former Korn Ferry Tour player lit up TPC Craig Ranch on Thursday, posting a 7-under 65.

A Q&A with the coach whose team got the last at-large berth in the NCAA Regionals: ‘We’ll be ready’

The Colorado State men’s golf team earned an at-large berth to one of six NCAA Regionals, with a chance to advance to the national championships.

The Rams were the last at-large team selected to participate in a regional tournament, getting the No. 11 seed in the Bryan (Texas) Regional, hosted by Texas A&M, from Monday through Wednesday at Traditions Club.

The top five teams from each regional, along with the top individual not on those teams, will advance to the national championships May 27 to June 1 at Grayhawk Golf Club in Scottsdale, Arizona.

We caught up with 10th-year CSU coach Christian Newton to discuss the Rams’ success this season.

Question: What does it say about this year’s team getting to the NCAA regionals? Because that’s not an easy task.

We had a bit of a tumultuous year. We’ve lost players to suspensions. We’ve lost them to a player who got hit in the head with a golf ball and got a concussion. We’ve had two back injuries. We’ve just had a lot of issues to deal with amongst the team, so we’ve had a lot adversity.

But they’ve been awesome. We were ranked as high as (No.) 110 in the country to start the spring, and we’ve just kind of scrapped our way back and ended up being the last team to get into the NCAA regionals.

We had some really great wins coming down the stretch. I think it just says a lot about their adversity and kind of what they fought through, so I’m very proud of them.

Q: Having an individual Mountain West champion is something that hasn’t happened often for CSU golf. What was that like for Connor (Jones) and the program?

A: That was really awesome. He had been peaking. He was playing really well but maybe just had lost a little confidence in his putting. And then he made a switch, switched a few things up with his putting, and in the last four events he played really well. He finished second in an event, and then he’s just had a lot of solid finishes.

And then for him to go to Mountain West and win there was awesome. He had maybe as big as a five-shot lead at one time, and then that lead dwindled down to nothing. He was tied for the lead, and then he birdies the 17th hole the last day to go up by one and pars the last to win.

So, I think it says a lot about him, what he’s quietly done. If you look at where he came from; Connor’s a transfer from (University of Denver), and was in and out of their lineup last year. He comes here, he plays every single time and then he ends up winning the Mountain West individual title. He has an incredible story.

Q: How much did that second-place finish as a team at the Mountain West Championships boost your chances of earning an at-large berth to the NCAA regionals?

A: It was huge, because basically the week before we had beaten Nevada and Boise (State), who were both teams that were in the top 50 that were in. Pretty much going to conference, I thought we would have to win or finish second.

So we go to conference, and we beat New Mexico to go to 2-1 against those guys on the year, and they were top 25, and beat Nevada and Boise again to have a 2-0 record against Boise and a 2-2 record against Nevada. It was huge.

Q: How exciting is this given that you were doing so well before COVID-19 shut down the 2020 season?

A: It is rewarding. We had it going, ranked (No.) 19 in the country when we got shut down in 2020, and it’s been a hard road back. Some programs have really benefitted from some of the things that happened with COVID. I don’t necessarily know if we would have benefitted. I think we’ve just had some real challenges, roster management and, in general, things that you do within the program.

So, for us to kind of start playing well and make it back into the postseason says a lot about where the program is. We don’t lose any of those starters, which is awesome, and we’re going to add two really good players, as well.

Things are looking back on the up and up for the program.

Q: Going back to some of the impacts of COVID-19 restrictions on your program, you had a number of international players on that team that I assume were affected even more by restrictions than the players from Colorado faced. How did they navigate their circumstances?

A: Basically they couldn’t get back over (to the U.S.). Restrictions for golf in Europe were not like they were here, where golf went gangbusters here. In Europe, everything was closed. We had a couple Swedes and an English player, they weren’t even able to play golf.

So, they’re out for the fall and then they roll back in here in Colorado in January, where obviously things are a little more challenging for golf, as well. We had some specific challenges as it related to those international players even getting back into the States. There were times I didn’t even think we’d get them back.

So, yeah, there have been a lot of challenges. I’m thankful for the way the team has handled it, and we really just took it day by day. We just said you know we’re writing a story here, and we’re going to write it as good as we can, and we’re going to make the ending really awesome.

The ending was not looking very good come December. But we certainly changed course and ended up writing a pretty cool story.

Q: It seems like your team is playing its best golf at the end of the year, with a lot of top finishes here in the past month?

A: Yes, and they’re very capable of getting one of those top-five spots. We’ve been close before. We’ve been fifth and lost in a playoff. We’ve been seventh and a couple shots back. So they’re highly capable of doing it, and I’ve told them that. They don’t have to do anything special (this) week; they just have to be themselves. A lot of times teams will show up and try a little harder because it’s the NCAA postseason. We’re just going on. We just have to be who we are and let the chips fall where they will.

Q: If you’re not able to advance to the national championships as a team, what are the chances some of your players advance as individuals? I know those are hard spots to get.

A: (Bryant) Davis and Connor would have gone on as individuals already. An individual advancing’s tough. A.J. Ott did it last year, and he had to finish second (at regionals) to do it. So, you’re pretty much looking at a top-five finish to get that done. There are guys that are capable of doing that, but we’re going to focus on the team advancing, so everybody gets to go.

Q: What do you know about this course?

A: The team has not played it. I’ve been there recruiting probably 10 years ago. I’ve done some homework with some coaches that have played there. It sounds like it’s a long golf course. It’s very challenging. They had a spring tournament there this year, and Texas A&M won with 30-over (par). I think it’s going to be hard, the wind may blow, and it’s going to be hot.

We’ll be ready. We’re going to go out early and try to get acclimated to the grass and temperature and give it our best shot.

Kelly Lyell reports on CSU, high school and other local sports and topics of interest for the Coloradoan. Contact him at kellylyell@coloradoan.com, follow him on Twitter @KellyLyell and find him on Facebook at http://www.facebook.com/KellyLyell.news.

Methodist won the team and individual title at the 2022 NCAA Division III Championship.

The former Korn Ferry Tour player lit up TPC Craig Ranch on Thursday, posting a 7-under 65.