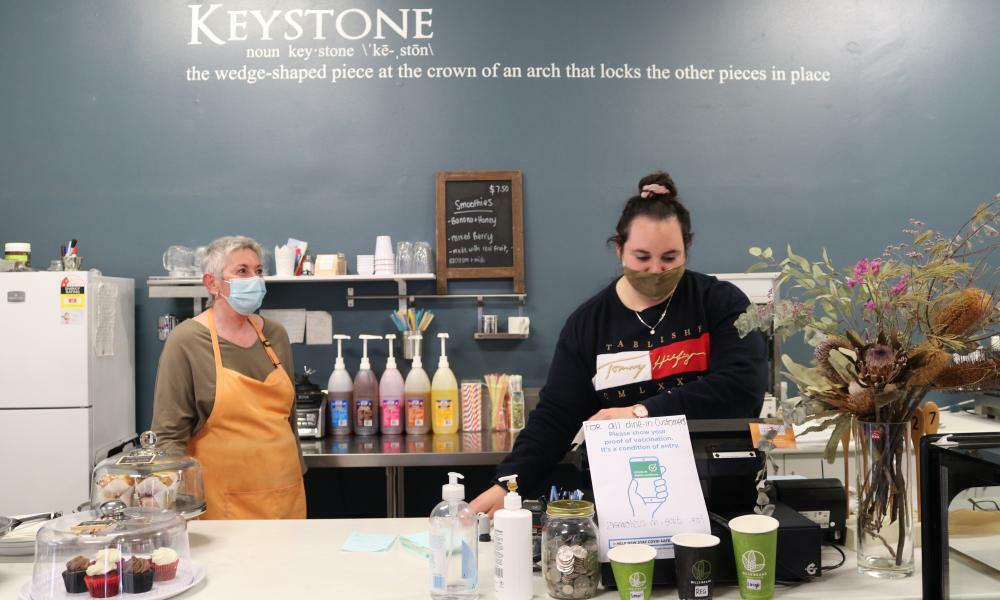 New South Wales’s roadmap promises eased restrictions for the state, but for regional towns like Gilgandra that were not in lockdown last week, the new rules in place since Monday represent greater constraints.

Many residents of regional areas like Cynthia Anderson, the owner of Tingles Massage and Beauty in Gilgandra, say the roadmap makes more sense for Sydney than it does for regional communities.

“The thing that I don’t understand is that last week we were able to serve people that weren’t vaxxed and this week we have to say no to them,” Anderson said.

Anderson said the community ties with clients made it all the more difficult. “It’s like family, to tell somebody they can’t come in is really hard, but I’ve had to do it. I can’t afford to get fined.”

Even for essential businesses, which can still serve vaccinated and unvaccinated people alike, the new roadmap has caused confusion for clients.

Caitlin King, the owner of Gil News and Gifts, said many customers influenced by the rhetoric of a statewide “freedom day” had been coming in without their masks and not signing in because “they think it’s all finished”.

“There’s a lot of confusion about it. Everything’s open as it was, it’s still the same, but there are all these new rules all of a sudden,” King said.

Last week, unvaccinated people were able to eat at Keystone Cafe, but since Monday only the vaccinated can now dine in while the unvaccinated have to get takeaway.

Sharon Olaya, the owner of Keystone Cafe, thought it was good that the opening up was happening slowly but said this six-week period before shops would be allowed to open again to the vaccinated and unvaccinated, like they were before 11 October, was “quite weird, it’s causing a lot of frustration”.

Gilgandra had one of the highest vaccination rates in the state, with 83.7% of the town having received both doses. However, the problems posed by the new rules were even more pronounced for regional towns with very low vaccination rates, according to Chris Cherry, the mayor of Tweed shire, whose rate of double vaccination was 58.2%.

“The opening up of the roadmap is a step forward for Sydney, but it’s a huge step backward for the Tweed community,” Cherry said.

“A lot of businesses are finding that being forced to be the people enforcing who can and can’t be served by their business is such a divisive thing in our community.”

Cherry said local businesses “don’t want to set themselves up as god”.

While Tweed shire businesses were open up until Sunday 11 October, since Monday Cherry said many businesses, such as Murwillumbah’s only cinema, had chosen to close “because they don’t want to discriminate against people who are not fully vaccinated”.

She said many restaurants and cafes were choosing to only serve takeaway as a deliberate choice to serve all customers equally.

Cherry said the imposition of new restrictions was “unnecessarily hard at a time when our businesses were struggling so much. To do this to the regions is a slap in the face.”

“The lockdown has been an incredibly challenging time for our state, both in Sydney and in the bush, and the NSW government is taking every step to ensure the health and safety of communities as we return to a level of normality,” Toole said.

“I appreciate that right now is a scary time for some, but I also know that the regions are looking forward to the day they can welcome back visitors from greater Sydney with open arms. Businesses in the bush have been doing it tough and families have been separated for too long.”