A global war on terror with no tangible results 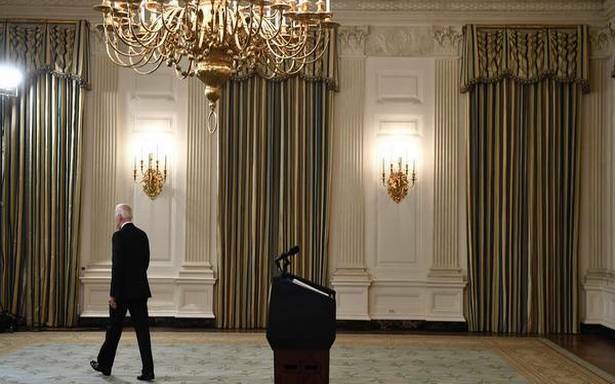 On the day the United States marked two decades since the September 11, 2001 terrorist attacks, the Taliban triumphantly hoisted their flag over the Afghan presidential palace to start off their new regime. The unprecedented 9/11 attacks prompted the U.S. not only to invade landlocked, strategically located Afghanistan but also to launch a global war on terror. Yet, the U.S.-led war on terror has yielded no tangible results.

If anything, it has made the world less safe. The scourge of transnational terrorism has only spread deeper and wider in the world. In fact, the U.S. President Joe Biden’s blunder in facilitating the terrorist takeover of Afghanistan raises the nagging question whether the seeds of another 9/11 have been sown.

Mr. Biden will be remembered in history for making the world’s deadliest terrorists — the Pakistan-reared Taliban — great again. Historians will be baffled that the U.S. expended considerable blood and treasure in a protracted war to ultimately help its enemy ride triumphantly back to power. The war killed 2,448 American soldiers, 1,144 allied troops, more than 66,000 Afghan security personnel, and countless numbers of civilians.

The Taliban’s defeat of the world’s most powerful military represents the greatest victory of violent Islamists in the modern history of jihadism, with the Taliban calling it “the most joyful day of our existence”. The triumph over the “Great Satan” is certain to inspire other Islamist and terrorist groups across the world.

It is worrying allies

America’s close partner, India, with its location right next to the Afghanistan-Pakistan belt, is likely to be one big loser from Mr. Biden’s Afghan debacle. The rejuvenated epicentre for terrorism next door could leave India less space to counter an expansionist China at a time when Indian and Chinese forces remain locked in multiple border standoffs since last year.

Despite the Afghan fiasco, Mr. Biden plans to withdraw from Iraq this year, in keeping with what he declared in his August 31 address to the nation: “This decision about Afghanistan is not just about Afghanistan. It’s about ending an era of major military operations to remake other countries.” This realignment of strategic objectives is rattling allies — from Taiwan to Ukraine — who fear being abandoned the way the U.S. threw the Afghan government under the bus.

Afghanistan may not be the last blunder of the Biden presidency. Robert Gates, who served as Secretary of Defense under U.S. Presidents George W. Bush and Barack Obama, wrote in a 2014 memoir that Mr. Biden “has been wrong on nearly every major foreign policy and national security issue over the past four decades”. Mr. Gates has proved right.

In fact, al Qaeda leader Osama bin Laden, in a May 2010 letter found in his Pakistan compound after he was killed by U.S. forces, advised al Qaeda not to target then-Vice President Biden, hoping he would one day become President. “Biden is totally unprepared for that post, which will lead the U.S. into a crisis,” bin Laden wrote. He too has proved correct, to the delight of all jihadists.

Mr. Biden, like his predecessors since 2001, has disregarded the lessons of 9/11. This is apparent from Mr. Biden’s attempts to paint the Taliban as “good” terrorists and ISIS-K (Islamic State Khorasan), al Qaeda and the Haqqani Network as “bad” terrorists. He even claimed that “ISIS-K terrorists” are “sworn enemies of the Taliban”, ignoring the Pentagon’s acknowledgment that one of the Taliban’s first actions after conquest was to free thousands of ISIS-K prisoners from Afghan jails.

What did America achieve in Afghanistan?

The misleading distinctions Mr. Biden has sought to draw between interlinked terrorist groups are part of his administration’s public relations campaign to downplay the implications of the Taliban conquest. Indeed, extending its good-terrorists-versus-bad-terrorists thesis, Team Biden has sought to court the Taliban as America’s new partner to help contain the “bad” guys, with United States Secretary of State Antony Blinken saying publicly that the U.S. is ready to work on “counterterrorism” with the Taliban.

This flies in the face of a key 9/11 lesson — that the viper reared against one state is a viper against others. Drawing distinctions between those who threaten U.S. security and those who threaten others is a sure recipe for failure, as terrorist cells and networks must be targeted wherever they exist on a sustained basis in order to achieve enduring results against the forces of global jihad.

In reality, the Taliban are closely entwined with other terror groups. As a United Nations Security Council report has said, “the Taliban and al-Qaida remain closely aligned” and cooperate through the Haqqani Network. Since their victory, the Taliban have not only refused to utter a critical word about al Qaeda but also have claimed there is “no proof” that bin Laden was responsible for 9/11.

The invasion of Afghanistan was a fraud: John Pilger

The Taliban and Haqqani Network are not “two separate entities,” as the State Department has claimed, but closely integrated, as the line-up of the new Cabinet ministers shows. And, although Mr. Biden sought to insulate the Taliban from the Kabul Airport bombing (August 26) by quickly pinning the blame on ISIS-K, the fact is that ISIS-K has little relationship with the ISIS founded by Abu Bakr al-Baghdadi. Rather, as part of Pakistani intelligence’s deception operations to build plausible deniability in terror attacks, ISIS-K draws its cadres largely from the Haqqani Network.

Afghanistan is set to again become a haven for transnational terrorists under an all-male regime dominated by former Guantanamo inmates and U.N.-listed or U.S.-designated terrorists, including the interim Prime Minister who was instrumental in the 2001 destruction of the Bamiyan Buddhas. The world is reaping the bitter fruits of a geopolitics-driven war on terror.

The 20th anniversary of 9/11 should have been an occasion to reflect on the forgotten lessons of those attacks, including the importance of not coddling terrorism-supporting regimes. With the global war on terror having gone off the rails, the anniversary was also a reminder of the imperative to build a new international consensus to help drain the terrorism-breeding swamps. It is not too late for western powers to absorb the lessons from national policies that gave rise to Frankenstein’s monsters.

Worldview with Suhasini Haidar | 20 years after 9/11, what have we learned?

Brahma Chellaney is a geostrategist and the author of nine books, including the award-winning ‘Water: Asia’s New Battleground’