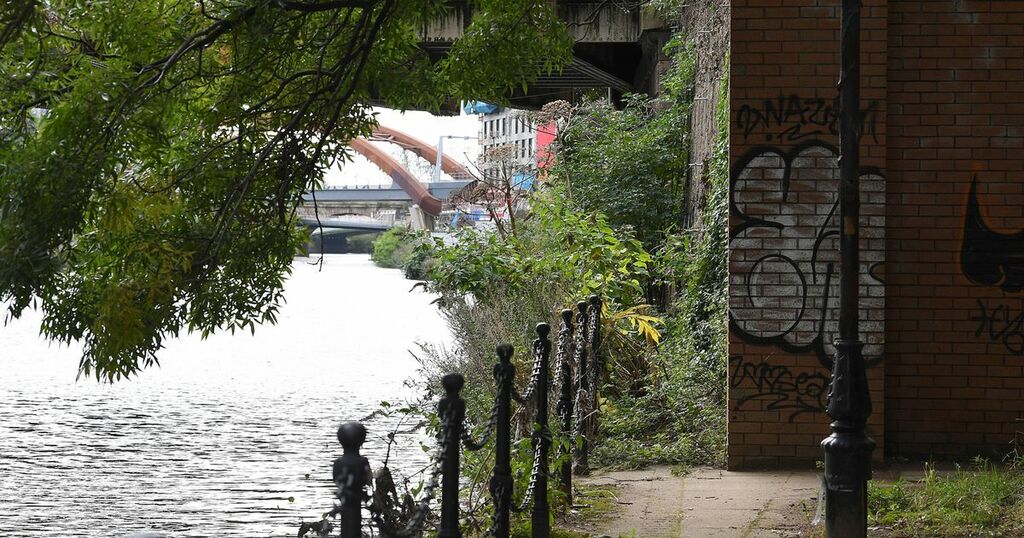 And, historians say, Victorian ladies walked along it- risking the foul smell of the water - on their way to boat trips down the Irwell.

But now the 200 yards of riverside walkway at Ralli Quays, in Salford, across the river from Manchester city centre, is at risk from developers.

An application to build a multi-million pound office and hotel development would, if it goes ahead in its current form, erase the footpath and cycleway. It passes in front of the famous, currently disused, Mark Addy pub, named after one of Salford's most famous sons, who saved 50 people from the River Irwell which rolls past.

The proposals have triggered a challenge from ramblers, who accuse Salford council of being 'secretive'.

An application to close the footpath was first submitted in September 2018, with the Greater Manchester Pedestrians Association being invited to comment.

A total of 55 people submitted their objections, and campaigners were told last year that the case was to be heard at Manchester Magistrates Court.

However the case was adjourned several times, and, in May this year, the Association was informed by a town hall solicitor that Salford City Council was not going to proceed with the application to close the right of way after all.

But then, last month, the campaigners were at the location making a podcast about the value of walking during COVID when they noticed posters revealing a new application for closing the footpath had been made.

Don Lee, a veteran guardian of footpaths who was a key member of the Open Spaces Society, said: "It was purely by chance that we were there and saw the application tied to posts. Despite our objections over the last few years we had not been informed about this latest application, it had been kept quiet.

"In 1721 this path was a towing path for horses. I have no objections to the new development but it should not mean the closure of the footpath.

"There was an attempt to do this last year and we mustered 55 objections. We were about to challenge it in court when the proposal to close the path was withdrawn.

"There is no way we will accept this. if necessary we will force a public inquiry. I am not afraid of barristers. I have stood up to them before.

"If this was happening in London, stopping riverside access to The Thames, there would be outrage. The council has been very secretive about it.

"The proposal is to close public right of way and privatise the access. We need a meeting with developers and the council to resolve it otherwise a lot of public money will be spent at a public inquiry."

Gloria Gaffney of the Greater Manchester Pedestrians Association, said: "The council didn't even tell us about this proposed order. This part of Salford is being swallowed up by development but it should not be at the expense of public footpaths."

The hotel and office development is proposed by property and investment giants Legal & General Investment Management.

As well as owning a 50% interest in Media City, L&G have provided major long term investment in the New Bailey District of Salford, where the New Bailey prison once stood.

The site proposed for the development, on Stanley Street, comprises two office blocks purpose built for H.M. Customs and Excise almost thirty years ago, which would be demolished.

L&G say: "The existing Ralli Quays buildings are underwhelming and redevelopment of the site will complement the scale and quality of the completed or planned new buildings.

"The proposal is to demolish the existing buildings and construct a new hotel and office scheme which takes advantage of its riverside location and views across the City."

The proposal will consists of a 12-storey office block with a rooftop terrace; a 16-storey 260 bed hotel; restaurant bar with terrace overlooking the river and a roof bar; and parking.

Morag Rose, from Manchester, who is a lecturer in Human Geography at Liverpool University, and part of a research team looking into creative walking is also campaigning against the closure.

She said: "We are fighting to save the public right of way along the Salford side of River Irwell at Ralli Quays.

"Access is threatened by the development of new offices and a hotel which will effectively enclose and privatise the path.

"The alternative route provided is a permissive path through the Ralli Quays development. This has no view of the water and could be removed at any time.

"We have less than a week to object .We believe the right to walk along the Irwell is a fundamental right and we assert the value of public space. It should not be sacrificed for private gain.

"The space is well used and highly valued, for example the benches opposite the People’s History Museum are frequently used by a wide range of people for different reasons including respite, socialising, picnicking and more.

"The route has a huge amount of potential for improvement and if we loose this stretch we lose the possibility of a walking and cycling path from Manchester city centre to Salford Quays and potentially beyond to Liverpool.

"The Irwell, and the Irwell and Mersey Navigation, are of huge historic importance to both Manchester and Salford, they are sites of special significance and relevance to the development of our cities. The area is rich in Industrial Archaeology.

"Concerns around homeless people using the area to sleep is not a valid reason to remove a right of way, we need a humane and holistic approach to homelessness and social care.

"The Covid-19 pandemic reinforced how important public space, and access to local amenities for walking, are for people, especially in areas where there are high percentage of flats without private gardens.

"There is a wealth of research into the physical and mental health and wellbeing benefits of walking and active travel. We should be increasing access and promoting walking, not restricting it.

"This restriction and removal of a path is counter to a number of local and national policies which promote green and blue space, active travel and pedestrian rights.

"We are asking people to send two emails, one to Salford council to modify the planning application and one to The Department of Transport to oppose the Stopping Up order. We need both because the two applications are interlinked."

"We do not want to scrap the whole development but believe that removing the right of way is not necessary and changes should be made to the design to retain full public access."

Councillor Mike McCusker, lead member for planning and sustainable development, for Salford City Council, said: “All comments on the planning application will be considered by the planning panel.”

The contested pathway is part of a continuous stretch for walkers from the old heart of Salford to The Quays and MediaCityUK which survived the regeneration of docklands.

It features in a 1856 oil painting by Day Jackson which is owned by Salford Museum and Art Gallery.

You can also comment via the Planning Portal if you are registered. The deadline is October 12th.

To object to the Department of Transport against the Stopping Up Order which is the legal power that will be used to remove the right of way the reference is: NATTRAN/NW/S247/4804. Email nationalcasework@dft.gov.uk. The deadline is October 13th.