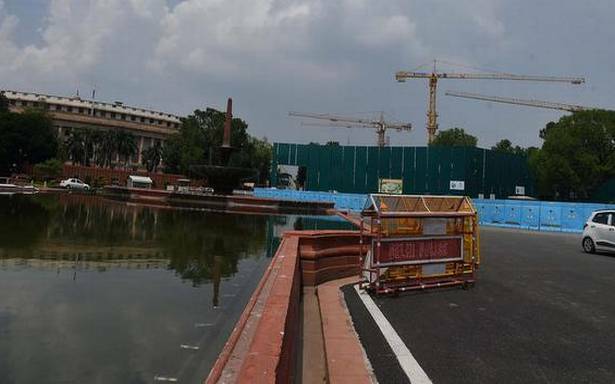 As part of the Central Vista redevelopment project, over 7,000 employees of the Ministry of Defence (MoD) will move to new office complexes at two locations from the existing hutments and old buildings around South Block and North Block. The two complexes constructed at a combined cost of ₹775 crore are scheduled to be formally inaugurated by Prime Minister Narendra Modi later this week.

“It is a big thing for us. Since Independence, many of our employees have been in hutments. For the first time, they will move into proper offices. Outside South Block, this will be the largest office space of the MoD,” a senior defence official said on Tuesday.

Some of the hutments are over 75 years old and some were stables back then. The existing hutments are spread over 50 acres as against 13 acres for the new complexes. The vacated area will be handed over for the redevelopment project, the official said.

The shifting will happen immediately after the inauguration on September 16 and is expected to be completed soon though no formal deadline has been set.

The various hutments and old buildings being vacated include Blocks A, B, E, G, H, J, L and M, Plot No. 30 and Plot No.108 (E&W) and Jodhpur House. In all, 14 offices are being relocated to the KG Marg and 13 offices to the Africa Avenue.

Stating that the decision on the new premises was taken around last March and construction began in July/August, the official said over 7,000 officers and staff belonging to 27 organisations — attached offices of MoD, service headquarters and other subordinate offices — are going to move to the new office complexes.

The new premises are designed as eco-friendly, green buildings and also have multi-level car parking for over 1,500 cars. While the cost of the construction was provided by the MoD, the work was carried out by the Ministry of Housing and Urban Development as part of their Central Vista project.

The location and space of these buildings have been so designed that trees have not been disturbed, the official said. “Not a single big tree has been effected.”

The MoD had constituted a joint coordination committee under Joint Secretary & Chief Administrative Officer (CAO), MoD, with representatives from all stakeholders to co-ordinate various requirements of specific organisations, space allocation and common amenities.

As part of the Central Vista redevelopment plan, both the heritage buildings of South Block and North Block are also planned to be converted into museums.