Make Us Dream. The message from the Rangers fans at the club’s training ground was simple on the eve of their semi-final.

And the players delivered to ensure that European dream is well and truly on after one of the greatest nights ever witnessed at Ibrox Stadium to move to within 90 minutes of history.

On a raucous, euphoric and emotional night at the Govan ground Rangers booked their place in the fifth European final of their history as RB Leipzig had no answer.

And as anniversary gifts go, getting their hands on that trophy on May 18 in the Ramon Sanchez-Pizjuan Stadium would be a special way to celebrate the club’s 150th year.

They wanted to do late kitman Jimmy Bell proud just days after his passing and they did that and more on an unforgettable evening for Giovanni van Bronckhorst and his men.

Trailing 1-0 from the first leg in Germany, a 3-1 victory on the night was enough to set up a final showdown against Eintracht Frankfurt in Seville.

James Tavernier fired Rangers in front with just 18 minutes on the clock for his seventh goal in the competition - the most of any player.

Glen Kamara then had them in dreamland with a second before the break as the Light Blues were half way to the final in Seville.

Christopher Nkunku levelled the tie on aggregate with a brilliant finish to haul the Germans right back into it.

But it was Rangers who had the final say and John Lundstram was the hero as he grabbed the winner to send Ranges into dreamland.

Kemar Roofe failed to recover from his knee injury as he missed out on the squad completely but fellow injury doubt Aaron Ramsey did make the bench.

It meant Van Bronckhorst went with the exact same starting XI as the first leg as he kept faith with Scott Wright ahead of weekend Old Firm goal hero Fashion Sakala.

The home side started on the front foot right from the off as they took the game to RB Leipzig and Ryan Jack’s shot from just outside the box held by Peter Gulasci in the first real effort.

Leipzig tried to use their pace to pick Gers off on the counter and Willi Orban, suspended in the first leg, spurned a good opportunity when he headed wide from a corner after losing Calvin Bassey.

The visitors threatened again after a lung busting run from Konrad Laimer before he slipped the ball to Yussuf Poulsen but Jack made a superb saving tackle.

But it was Rangers who struck just short of the 20-minute mark as Ibrox erupted and the aggressive start paid off.

The Finnish midfielder’s role in the build up to that opener was crucial before Kamara himself got on the scoresheet.

It was a lovely build up as he exchanged passes with Wright who cushioned the ball into his path and the midfielder stroked low into the corner.

Van Bronckhorst couldn’t have hoped for a better start yet they should have had a THIRD before the half hour when Joe Aribo somehow missed from close range after Tavernier headed Borna Barisic’s cross into his path.

Portuguese whistler Artur Dias has been card happy in the Europa League and Connor Goldson picked up a harsh booking for a challenge on Poulsen which left him living dangerously - and he survived a foul on Christopher Nkunku shortly after.

Rangers were dealt a blow on the stroke of half-time when Joe Aribo went off after a free kick hit him flush in the face and Sakala replaced him.

Leipzig enjoyed more possession in the second half and Jack and Wright went off with Leon Balogun and Scott Arfield on in a double change.

The visitors started to probe and Allan McGregor pulled off a huge save when called upon but they couldn’t hold out much longer.

Just moments after McGregor’s one v one stop, Angelino - who netted that stunner in the first leg - crossed for Nkunku and the Frenchman sent a brilliant shot into the net.

It was all about character after that and Rangers showed it in abundance as they struck again to claim victory.

The Leipzig defence failed to deal with Kent’s deep cross and the ball fell to Lundstram who sent Ibrox wild.

Here's five talking points from a huge night at Ibrox...

History in their hands

There is a feeling that Europa League success could be written in the stars for Rangers in a special year for the club.

Those 1972 legends wrote their name into Ibrox folklore and now van Bronckhorst and his players have the chance to join them.

Van Bronckhorst is only six months in the job but he has the chance to do what only Willie Waddell has done before him in leading the club to a major European trophy.

Rangers were underdogs in their last European final with Walter Smith’s players running on empty during a marathon season and Zenit St Petersburg picked them off in Manchester.

But there is no reason for this Ibrox side to feel inferior to their final opponents Eintracht Frankfurt after the teams they have beaten.

Borussia Dortmund are second and RB Leipzig fifth in the Bundesliga table with the team they will meet on May 18 currently in eleventh.

But the Germans - who defeated Rangers in their first ever semi final in the 1960 European Cup - will argue they have seen off top sides Barcelona and West Ham United so will fancy their chances.

Celtic will always be associated with Seville after reaching the UEFA Cup final there in 2003 - but now it’s Rangers turn to write a chapter in the Andalusian capital.

The Parkhead side took an estimated 80,000 travelling fans and there is likely to be similar huge numbers making their way to southern Spain for the game on May 18.

Many fans had already booked flights in anticipation and those who didn’t take a gamble are likely to see prices shoot up as the scramble begins for tickets.

Who needs a striker when you have a free-scoring full back? So much has been made of Gio van Bronckhorst’s lack of options up front.

But the Dutchman can always rely on his skipper to step up to the plate, especially on the European stage.

And he’s now on 15 for the season in all competitions as his incredible contribution to the club continues for his £200,000 transfer fee.

It was an emotionally charged night at Ibrox following the passing of legendary kitman Bell.

Van Bronckhorst and the players paid tribute as they laid a wreath outside the stadium earlier in the day.

And images of Bell throughout nearly four decades of service to the Ibrox club were beamed onto the stadium screens.

Fans applauded as the montage was shown before a minute’s silence was observed prior to kick off to remember the much-loved figure.

When Glen Kamara netted his goal he pulled off his black armband and kissed it in tribute to Bell. 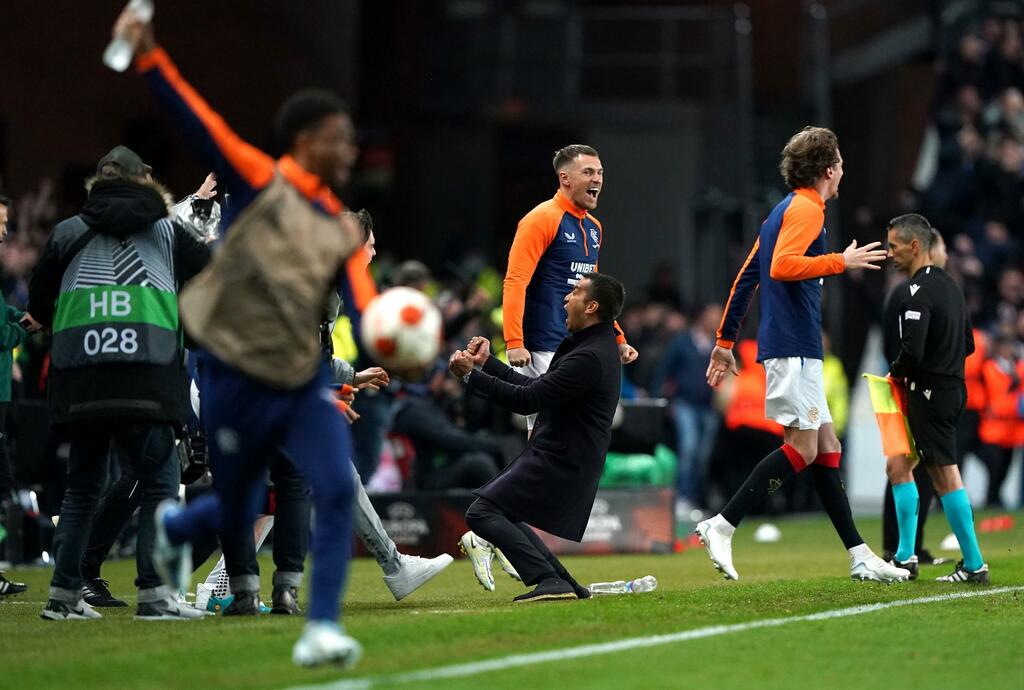