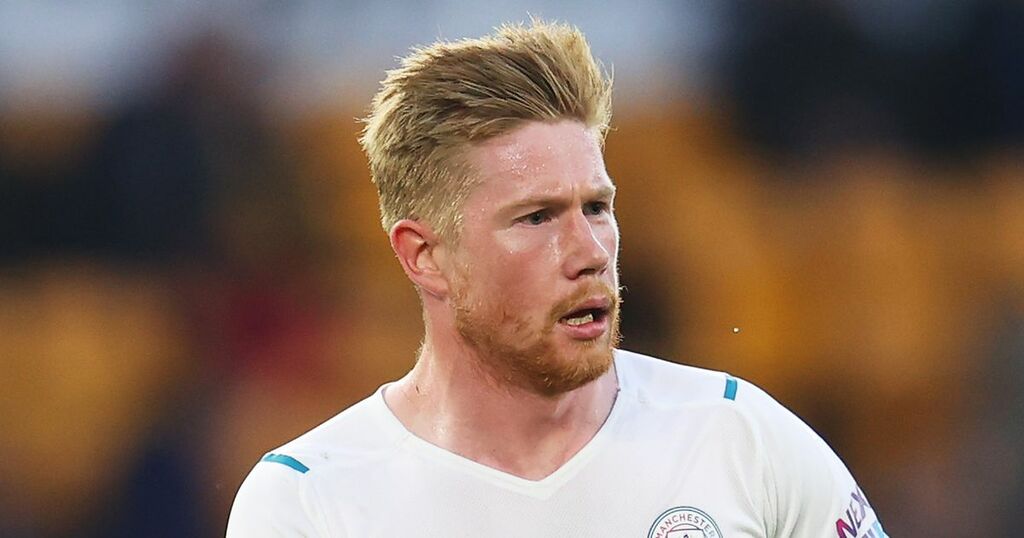 The Independent UK
One subscription that gives you access to news from hundreds of sites
Wolves vs Man City LIVE: Premier League result and final score as Kevin De Bruyne nets four

Manchester City took another stride towards winning the Premier League title on Wednesday evening after thumping Wolves 5-1 at Molineux.

A stunning 17-minute hat-trick from Kevin De Bruyne gave the visitors a commanding advantage in the first half, despite Leander Dendoncker's equaliser. The Belgian went on to score a fourth goal after the interval, while Raheem Sterling tapped in their fifth.

Pep Guardiola's side are now three points clear of Liverpool in second with just two games left. City's remaining league fixtures are against West Ham and Aston Villa, while the Reds take on Southampton and Wolves. Here are five talking points from Molineux.

Is Kevin De Bruyne the greatest midfielder in Premier League history? Let us know in the comments below!

De Bruyne produced one of the greatest individual displays in Premier League history. His first goal was a thing of beauty. A one-two with Bernardo Silva gave him the opportunity to fire at Jose Sa, hammering the ball into the bottom corner with his left foot.

The Belgian's second goal was scrappy but equally as impressive. He picked up the ball from Oleksandr Zinchenko's forward pass and played it into the feet of Sterling. Sa closed the Englishman down, yet possession squirmed straight to De Bruyne to finish.

His third goal was just ridiculous. He picked up the ball in midfield, drove at the defence and just smashed a strike into the far corner with his left foot. De Bruyne had ripped Wolves to shreds... and there were only 24 minutes on the clock.

The 30-year-old wasn't finished there, scoring a fourth after the interval. Few would've been surprised if he added a fifth (and he nearly did - rattling the crossbar). De Bruyne must be considered for a third consecutive PFA Players' Player of the Year award.

The home fans were after a response following De Bruyne's first goal... and they certainly got one. Portuguese winger Chiquinho almost had a chance to equalise within seconds of the restart, forcing Aymeric Laporte to produce a last-gasp tackle to deny him.

Then came Dendoncker's goal. Raul Jimenez picked up the ball on the counter and drove at City's defence. He fed possession to Pedro Neto, who played a low cross into the box for Dendoncker to hammer home. It was counter-attacking football at its best.

Unfortunately for Wolves (and Liverpool) fans, City have De Bruyne.

Guardiola recently confirmed three City players have been ruled out for the rest of the season through injury - and they're all defenders. Much to the Spaniard's frustration - John Stones, Ruben Dias and Kyle Walker will not kick another ball this term.

And, with Nathan Ake still returning to full fitness, Guardiola was left with just one recognised centre-back against Wolves - Laporte - forcing him to play Fernandinho at the back. The veteran didn't put a foot wrong against the hosts, producing a captain's display.

To make matters worse for Guardiola, Laporte went down with a knee injury in the second half. He played on for a while but couldn't complete the game. Even the big clubs aren't immune to an injury crisis - just ask Jurgen Klopp after Liverpool's woes last season.

It's been a disappointing end to the season for Wolves, who've won just three of their last 12 Premier League games. If it wasn't for their last-gasp equaliser against Chelsea on Saturday, they'd have lost five in-a-row.

Wolves' hopes of playing in Europe next season are all but over, sitting five points behind West Ham in seventh. Yet it's still been a good campaign for Bruno Lage's side. They'll be confident of challenging the top seven again in 2022-23.

Guardiola hasn't brought the European Cup to Manchester yet, but he won't care about that right now. City are just four points away from winning an eighth league title and fourth under Guardiola's leadership following their stunning performance against Wolves.

If City get over the line, Guardiola will become the second most successful manager in Premier League history after Sir Alex Ferguson, who won 13 titles at Manchester United. The Spaniard will eclipse the three titles won by Arsene Wenger and Jose Mourinho.

It'll be some achievement by Guardiola. He's quickly creating a dynasty at the Etihad and, with Erling Haaland coming in the summer, title number five could be won by this time next year. Guardiola's been at City six years... and he could just be getting started.

The Independent UK
One subscription that gives you access to news from hundreds of sites
Wolves vs Man City LIVE: Premier League result and final score as Kevin De Bruyne nets four