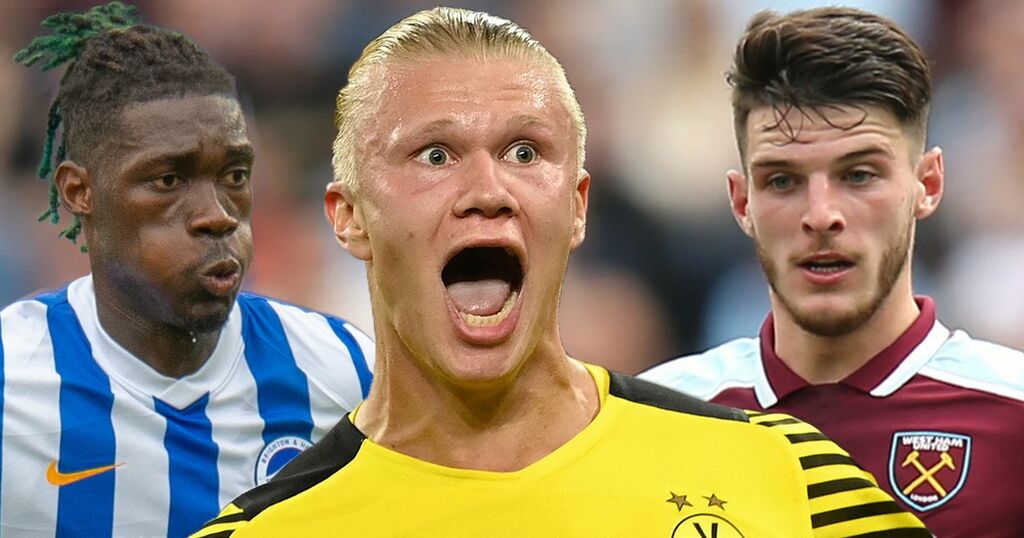 Manchester United supporters are rightly very optimistic following a transfer window which, on paper at least, has helped them close the gap on their title rivals.

Ole Gunnar Solskjaer went into the summer knowing the need to sign a new centre-back and a right sided attacker.

And after landing Raphael Varane and Jadon Sancho, those two positions were filled with world class talent.

The deadline day acquisition of Cristiano Ronaldo was the biggest bonus possible, leaving fans dreaming of a first Premier League crown since 2013.

But there is a feeling that United are still one player light in the short-term and potentially a couple long-term.

Rio Ferdinand wanted to see a new defensive midfielder come in, with reports suggesting Solskjaer himself sees one as the ‘missing piece,.

Meanwhile, with Ronaldo and Edinson Cavani both in the twilight of their careers, a No.9 to lead the line for the next decade is also on the agenda.

Here are five players that could be on a very early United wishlist for 2022.

The West Ham midfielder is likely to be the top name on Solskjaer’s transfer radar. Rice appears to be exactly the type of player Man Utd lack in their midfield.

Tough in the tackle and brilliant on the ball, the England star has the potential to anchor the Red Devils’ midfield for a decade.

Recent reports claim Rice, 22, is reluctant to sign a new deal at the London Stadium and wants to test himself in the Champions League.

He will cost any suitor in the region of £100million such is his importance in east London, but even at that kind of outlay, he could be a real target.

Linked with the likes of United, Liverpool and Arsenal for most of the window, Bissouma would ultimately remain with Brighton.

However, it seems inevitable that the midfielder will be on the move sooner rather than later after continuing to impress in the Premier League.

Bissouma’s contract is set to expire in 2023 and with no new deal on the horizon, the Seagulls could be forced to cash in next summer.

Ian Wright claimed Bissouma could be the ‘perfect fit’ to sit at the heart of United’s midfield, with his solidity enabling Solskjaer to play all of his attacking talents.

The latest Monaco star to be touted as a star for the future, Aurelien Tchouameni is already earning glowing reviews for his midfield performances.

Aged 21, the Frenchman has already broken into Didier Deschamps’ side and is beginning to form a partnership with Paul Pogba in midfield.

United were linked with Tchouaemni during the summer and although nothing came of that, they could return next summer.

When it comes to signing a centre forward, there is only one name on the lips of Manchester United supporters. Erling Braut Haaland.

The Norwegian still feels like the one that got away after missing out on his signature when he left RB Salzburg for Borussia Dortmund.

Dortmund landed Haaland for close to £20m and although he will cost astronomically more now, he looks to be worth the money.

In 64 games for the Bundesliga club, the 21-year-old has a staggering 63 goals. Reports have suggested that Haaland’s release clause will become active next summer, meaning he could be snagged for the frankly bargain basement price of £68m.

United will need to be at their persuasive best however, with almost every top club in Europe likely to state their case.

If United really want to establish themselves back at the top of world football, then the signing of Mbappe would do just that.

The World Cup winner, along with Haaland, looks set to take the mantle as the game’s top player for the next 10-15 years.

And United have been handed the most unique opportunity to try and sign him.

Mbappe looks like he will not be signing a new contract with Paris Saint-Germain and with his deal expiring at the end of the season, teams can negotiate a pre-contract agreement as early as January ‘21.

Real Madrid appears to be Mbappe’s dream destination, but there is no reason United couldn’t throw their hat in the ring for the superstar.